Grasshoppers, still hurting from the narrowest of defeats at Wharfedale last week, hosted a Huddersfield side that they had lost to in both fixtures last term.

Hoppers were depleted by injury and unavailability to the extent that recently retired Head Coach Paul Arnold was on the bench!

Under a clear blue sky with not a breath of wind Huddersfield kicked off and were soon camped in the Preston half pressing the Hoppers’ 22 with phase after phase of attack back and forth across the field. The home defence was solid as ever but even though an early interception by Scott Jordan took him to the 10m line, the ball was knocked-on in the tackle and almost ten minutes of the match had elapsed before the home side set foot in their opposition’s territory.

However, once there, they began to dominate the play with the forwards moving the ball towards the try line in a series of pick-and-go moves and it was the visitors’ turn to defend as Hoppers searched for a gap inside the 5m line.

As has been the pattern in games this season, loose handling and penalties prevented any reward for the home side’s efforts and when a long pass out towards the wing failed to find anyone play retreated to the 22.

Hoppers regrouped and another wave of attacks led to a lineout on the Huddersfield 5m line from where the forwards kept possession and were able to work the ball towards the Huddersfield posts. With the referee playing advantage, Hoppers had a free ball and Ben Dorrington nudged a perfectly weighted kick towards the wing in goal only to see it knocked-on in the tackle as a sprinting Jordan tried to secure it.

The ensuing scrum in front of the posts was re-set three times and again the ball went out to the wing and this time it was the waiting Jordan Dorrington who collected it but he was unceremoniously dragged into touch.

For the spectators it had been a frustrating first twenty minutes where both sides had fought their way deep into their opposition’s half and had had chances to score. But the scoreboard (once again ‘Old School’ as problems with the electronic board have yet to be resolved) remained untroubled until a break by Huddersfield’s Workman had him dodging tackles and took him from his own 15m line to the Preston 22 with ease.

The ball moved through a series of Huddersfield hands to number 7, Parfitt, who scored wide of the posts. Milner’s conversion attempt missed but once again, Hoppers found themselves behind in a game where they had been dominating the open play.

The restart was kicked long to the Huddersfield 5m line but was lost forward as the full back fumbled his catch. Hoppers won the ball from the scrum and mounted yet another passage of phases across the field in front of the posts only to be frustrated by a penalty which took a relieved opposition back to their own 22. The lineout ball was collected by Ryan Carlson who was outstanding in this position all afternoon taking just about every ball on his own team’s throw and winning several on that of the opposition’s. Ben Dorrington took the pass to cross the line and Jake Squirrell added the extras so that, with half an hour gone the score stood at 7 – 5.

The final ten minutes of the half saw both teams attacking their opposition’s 22 in turn but with penalties and the ball lost in handling, the score remained unchanged as the teams went in for the break.

Whilst Hoppers had dominated in all areas, they had not turned their possession into points and once again poor decision-making and an inability to make the decisive move to complete an attack had resulted in only a slim lead.

Huddersfield had maintained a dogged game plan and although penalties and sloppy handling had blighted their hosts’ attempts to build a commanding lead, they had managed to keep them out and keep themselves well and truly in the game.

The discussion in the Preston dressing room must have made an impression as Hoppers restarted and immediately had a scrum on the Huddersfield 10m line. The ball was collected by Ben Dorrington who tore through the visitors lines to the 22 where he passed to his brother. Hoppers kept possession and moved the ball to the opposite wing for Tyler Spence to make ground before passing to Matt Crow to score the second try. The conversion fell short and bounced off the top of the upright’s protective base to move the score on to 12 – 5.

From the restart Hoppers continued to pressurise the Huddersfield defence with Matt Lamprey seemingly carrying the ball at almost every turn. The home side’s lineout was solid throughout the match and they had the majority of possession, driving the scrums and making ground only to be thwarted by penalties and handling errors.

Huddersfield then managed to bring their backs into play and several swift handling moves took them into the Preston 22 and a penalty just wide of the uprights. Milner’s kick was good and the lead was cut to four points.

Once again, Hoppers drove deep into the Huddersfield 22 and a series of phases resulted in a scrum on the 5m line. In trademark fashion, Lamprey peeled away to score towards the corner. Squirrell’s kicking boots were at home and the conversion failed but the score now looked a little more healthy at 17 – 8.

Two minutes later Hoppers were given a boost when the Huddersfield try scorer, Parfitt, was yellow carded for foul play. However, they could not capitalise on their player advantage and almost immediately the visitors had their second try, scored by Workman and converted from wide on the wing by Milner.

A short bout of ‘foot tennis’ followed from which a Hoppers’ pass was intercepted by full back Hodson who broke through from the Hoppers’ 10m line to score unopposed under the posts. The simple conversion was good and now the visitors were five points in the lead having scored twice whist down to fourteen players.

Play was stopped for a while when Spence was injured and after some treatment he limped off. Fortunately his ankle was only turned and his place was taken by Jordan who returned to the field after being tactically substituted by Jacob Browne fifteen minutes earlier.

Hoppers resumed their pressure on the Huddersfield 22 and with just one minute of normal time left Jordan Dorrington fought his way to the line for the Bonus Point Try. The score on eighty minutes was tied at 22 – 22 when Ben Dorrington’s conversion attempt went wide but with the Visitors restarting the game most of the home supporters would have been forgiven for expecting the collected ball to be sent off the park. However, once again flawed decision- making proved the Hoppers’ undoing when they pressed on with the game, lost a lineout on half way and then had to watch as the Huddersfield winger Stewart raced the length of their half to score their winning, Bonus Point Try and with yet another successful conversion by Milner, three points became two as the tied game became a loss.

Coach Donny Sutherland was struggling to hide his frustration,

‘We had enough possession in the first twenty minutes and should have been well clear by half time. Although we dominated in just about every department, we made poor decisions and a number of individual mistakes cost us the game. The second half was very disappointing in that we should have put the game away early on but credit must go to Huddersfield, they stuck to their task and for the third time they beat us in the last minutes.

There are lots of positives to take away however. We didn’t get the reward for our efforts and we know what we need to work on for next week against Tynedale which will be another tough test’.

Click on the picture below to see all of Mike Craig’s great photos from the match. There is also a copy of the match day programme linked below. 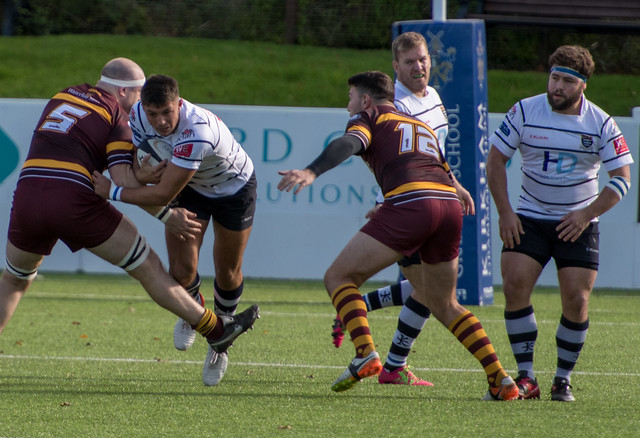