This weekend we had two teams entered into the PGH minis festival, namely Hoppers and Fireflies.

Hoppers started brightly winning their first game and then drawing their second. Unfortunately, they suffered a reverse in their 3rd game losing by 1 try to Fylde. In a must win final group game they came up against a strong Warrington side. The first half was dominated by Warrington but Hoppers launched an impressive fightback, however Warrington hung on to seal the victory and therefore Hoppers exit from the festival in the group stage.

Fireflies entered the competition with plenty of confidence after winning the VOL festival and remaining unbeaten in Huddersfield. Fireflies played and won their 4 group games playing some excellent rugby. Their semi final saw them drawn against a strong Waterloo team. After a slow start which saw them go two tries down they sparked into life and played some top quality attacking rugby supplemented by superb defence which eventually overpowered Waterloo.

The U8’s cup final saw Fylde against the Fireflies. Again, Fireflies started slowly going two tries down but their determination and competitiveness kicked in supplemented by rolling substitutions resulted in a 9 – 6 victory!!

Well done to both squads! 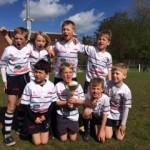 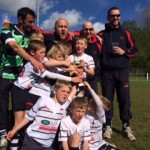