Local derbies have their own special place in every sport and the games between Hoppers and Fylde are no exception. As Dad (President Keith Brierley) said in his comments at the pre-match lunch,

“….throughout the years playing each other we have always been friends both on and off the field – but perhaps not so much on the field today….”

This encounter had the added significance of both clubs celebrating their longevity, Hoppers, their 150th year and Fylde their centenary although it was a less than sell-out crowd that witnessed what turned out to be an interesting and certainly for the Hoppers’ supporters, entertaining game at the Woodlands.

It was another bright, warm afternoon with little breeze as Hoppers kicked off. They were awarded a penalty and opted to scrum. Ally Murray broke to the Fylde 22 and the hosts were immediately defending deep in their own territory. They cleared the ball back into the Hoppers’ half and then gained a lineout on their 22.

The ball was collected by their centre, Rawlings who broke away to score their first try which was successfully converted by Smith and after four minutes Hoppers were 7 – 0 down.

They restarted and Ryan Carlson made a 20m break towards the Fylde 10m line only to be stopped by a high tackle. Then from a Hoppers’ lineout Tyler Spence made the first of several telling runs into the Fylde half stopped again by a high tackle. This time the offender, full-back Carlton, was shown a yellow card. Jake Squirrell tee’d up the ball in front of the posts and the Fylde lead was reduced to four points.

Sadly for the visiting supporters Fylde restored their seven point lead when two minutes later their own penalty was kicked goalwards.

The Hoppers’ restart was somewhat ambitious and ran out dead behind the Fylde goal. From the scrum on half way the hosts mounted a fast paced attack which, despite what seemed to be two knock-ons which went unnoticed, took them all the way to the Hoppers’ line where the referee’s initial decision was that the ball was held up. However, after consultation with the TJ the try by hooker Gregory was given, converted by Smith and still with only fourteen players on the field, Fylde increased their lead to 17 – 3 and less than a quarter of the game played.

Hoppers made changes with Tyler Sloane and Adam Howard giving way to Luke Proctor and new boy John Blanchard who is on a season loan from Sale FC.

The game then settled into a typical derby with both sides making ground and then having to defend in turn. Fylde were faster on the break and seemed to be better at keeping possession. Hoppers however recovered their customary scrummaging strength and were repeatedly able to hold and drive their opponents.

With thirty minutes gone, Fylde had a lineout on half way but Murray was fouled in the air and the penalty took Hoppers to the 22. Another penalty then gave them a lineout on the Fylde 5m line from which Matt Lamprey peeled away and scored their first try. Squirrell provided the extras and the score edged back in Hoppers’ favour.

The half played out with the visitors making good runs against the strong Fylde defence but they were unable to capitalize on them and at half time the score remained 17 – 10.

So far it had been a typical Derby game. The sides were evenly matched with hard running and tackling from them both. Hoppers needed to get the ball to their backs who, when they had been given the chance, had made telling breaks into the Fylde half. Their hosts’ early tries had made the difference but Hoppers’ inability to make progress when their opposition was reduced to fourteen was also a problem. When the yellow card was given the score was 7 – 0, when the ten minutes had been served it was 17 – 3.

The second half play maintained the dour pace of the first with Fylde having the majority of possession and repeatedly going through phases albeit back and forth across the field in the face of persistent defending by the Hoppers’ forwards.

Things changed when Sam Stott was shown a yellow card for slapping the ball down and with Hoppers down to fourteen Fylde’s continuous pressure resulted in their third try scored by winger Grimes and duly converted by Smith.

Then, as if to pile on the misery for the travelling faithful, Noah Miller was sent to the sin bin and as the clock moved on to thirty minutes things were looking bleak, Hoppers had not been out of their own half at any time in the second period.

A ray of hope came in the form of the second new boy, Nick Gregson who, having joined the team from a Rugby League background, was making his first appearance in a Union game. His break to the Fylde 10m line enabled Proctor and Blanchard to work the ball to the 22 where further breaks by Lamprey and Gregson had the forwards pressurizing the hosts’ line.

A quickly taken penalty was collected by Ben Dorrington on the break to score wide of the posts.

This time it was Gregson stepping up to the mark and he stroked the ball confidently between the uprights. Hoppers were back in the game.

Now the lads had the bit between their teeth and the play was in their favour as they mounted continual attacks deep into Fylde territory. For once a chip forward worked and was collected by Ryan Carlson who had been a thorn in the Fylde side throughout the match, winning ball in the lineout and relentlessly tackling all over the pitch.

He took the ball towards the 22 where it was taken on by Proctor and Lamprey to the Fylde line and the final ball, back to Carlson, completed the third try five metres in from the touchline.

Once again it was Gregson with the tee from a long way out but he split the post with ease to even the score at 24 – 24 with only minutes remaining.

Hoppers’ supporters must have been wishing for more time as at last their team was on top of the game. However, the final whistle came and the teams left the field, honours even, which was probably a fitting result to a well-balanced match.

Arnie was beaming after the game:

‘At half time the lads were really down, they looked deflated as they came in with 17-10 on the board. But then after spending thirty minutes in our own half and with a man down, to get two tries in quick succession shows their quality and attitude.

Our mistakes allowed them to make early scores which put pressure on the team. To end up with a draw almost feels like a win and I have told them to enjoy the weekend with their heads held high.

These are early days and this match does not define the season. But once again we showed we can defend and we forced them to make mistakes although we didn’t capitalize on them until late in the game.

The replacements really made a difference with Blanchard and Dorrington making good breaks and Nick Gregson, in his first Union game was impressive with two fifty metre breaks and … who knew he could kick?!

Having said that, this was another great, full-team performance and the credit must go to them. They were impressive and I am very happy to come away with two points.

Next week we take on Scunthorpe who scored thirty whilst losing at home to Fylde last week so it is important to remain focussed in this early part of the season.’

So, it turned out to be a good afternoon for the Hoppers and we can look forward to resuming the campaign next Saturday. Kick off is at 2.30 so let’s see if we can get a good crowd to support the lads.

Click on the picture below to see Mike Craig’s gallery from the match and look further down for the video highlights. 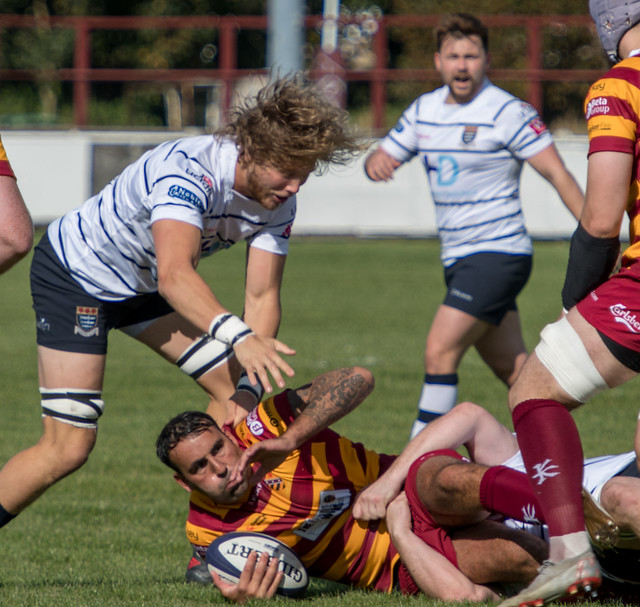