In this article I caught up with three members of the team who have very  important roles working with the players in the build up to the coming season. 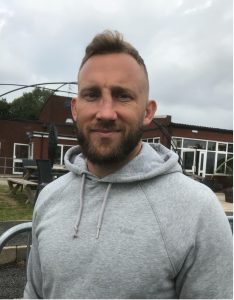 Really good. Coming down to Preston and meeting everyone behind the scenes was really great. They showed me round the facilities which are definitely different to what I’ve been used to before but really, really nice and I’m looking forward to the season ahead. I’ve met the players now and they’re all very enthusiastic and hard-working and they have smiles on their faces so it’s good to be around.

Yes, definitely, that’s right. I know that there is a good following fan base around Preston and I just want to make sure that it’s an exciting brand of rugby but at the same time it’s got to be effective, it’s got to be efficient so I don’t want people over-working so I try to keep it as simple as possible but with many variations and the boys have really bought into it so that’s the most important thing for it to go well and I think the first few games will be a really good test for us.

To be honest, I’m quietly confident but for me it’s one game at a time. I don’t want to look too far ahead but certainly, everyone knows quietly, what we’re aiming for, where we believe we belong and that starts early doors. We have to lay down a marker and the hard work we put in now will show in the first few games. You want to be top of the table.

Yes, what I’m doing pretty much is a general thing, the whole team’s attack. Arnie’s doing a great job with the line-outs, the mauling and the scrums which has been really effective and I’m doing the whole team in terms of our attacking shape and obviously focussing a lot on the backs in terms of their strikes off the base that we get from the scrums and the line-outs but I’ll be helping with defence too, just tweaking things and bouncing ideas of Arnie. 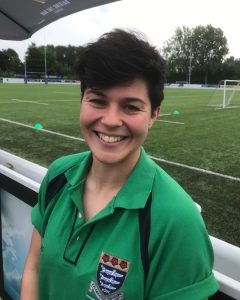 It was definitely an opportunity I couldn’t miss. I was working in non-league football which was a great experience but rugby is my true love and, as you have mentioned, I do play for the women and it was one of those players who sits on the committee that told me that this job was going and I thought, ‘if the opportunity is there, then definitely go for it’.

Not a great amount as yet. I’m getting to know people and getting a feel for how much work I am going to have to do with them, hopefully it will not be too quiet although I hope nobody is too injured.

Oh absolutely, the coach journeys are the best as long I don’t have to get involved too much. I just want to be able to be a spectator and to not be called upon too often.

I went to UCLAN and did Sports Therapy there and a couple of years later I did a Masters Degree in Elite Football Rehab which is easy to transfer obviously but I understand rugby more than I do football despite doing a Masters in it.

I also worked for the Blackpool Academy as a Sports Therapist there and I have my own practice. I’m originally from Birmingham…

No, I’ve declared myself a northerner!

Yes, as well as being the main medical person, you have to be a sort of ‘go to’ person for all the players and I think luckily, me being a female, you have more of an empathy with the players. With working with men before, I feel that they seem very confident in going to you with not just injury problems but often they will say something when they are on the treatment table about any troubles they’ve got and sometimes it’s more of an arm around the shoulder than ‘their leg’s hanging off’ sort of thing.

Yes, and getting to know the players as well because sometimes some of them need a kick up the backside but some of them do need a hug now and again. It just depends, you’ve got to sniff out which ones are trying to avoid the fitness and which really do need your help.

It’s probably worth mentioning that at the time of this interview Lucy was sporting an orthopaedic boot on her leg due to an injury picked up whilst playing rugby for the army at Aldershot! The big boys had better watch their step…… 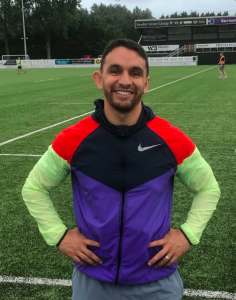 Yes, I grew up here at the Club. I came at five years old and left at eighteen so I did the whole, ‘knee-high to Grasshopper’ process. It’s my home-town club and I just live round the corner as well.

I got to the stage where I realised I was not going to compete with these boys so it was a matter of going and playing elsewhere where I could.

Unfortunately a few nasty head injuries meant that I couldn’t carry on playing and so to get to come back to where I call home is a real opportunity for me and I’m very glad I came back.

My role has been to come in and create the kind of culture where the boys are engaging really well in terms of their conditioning, in, out and pre-season. Currently we’re looking at ‘building load’ to get them ready for the start of the season.

‘Building load’ is creating a training platform for them to get progressively fitter and stronger so they are ready to play. The big thing that anyone who plays rugby knows is that it’s not just one game that they have to be ready for, it’s a long, long season and it’s really tough so the boys need to know that their bodies are going to be prepped for it, not just pre-season but for the long term. It’s a system that we’ve put in place for them.

Massively so. Lucy is an amazing Sports Therapist so we’re really lucky to have her here. She’s almost taken the injury crisis and fixed it. We’ve got lads who looked like they were going to be out for at least twelve weeks and who now could be close to starting the season which is all down to her hard work. I’m now able to take the work that she’s done and put it into practice on the pitch which of course is great.

I’ve been in the fitness industry now for over ten years, it’s all I’ve ever done. I’ve worked with the general public and pro sport for the last five years on a one-to-one basis with football and rugby players and a few Olympic athletes preparing for the Rio Games in 2016 so I have some experience in working with sportsmen and getting them ready for action.