Preston Grasshoppers travel across the Pennines this Saturday for what on paper looks likely to be their toughest test of the season, when they meet fellow relegated Otley at their Cross Green ground. Both teams will be eager to set down a marker for the rest of the season in a game after which neither will want to come away as losers.

Since the home side were relegated in 2011, the eight meetings at Cross Green have all been close tussles, with no more than seven points separating the two teams in any of these. Both sets of spectators will be hoping for more action on the scoreboard than on Hoppers last visit when the cobwebs weren’t disturbed.

Both teams played newly promoted sides last weekend, and as expected each came away with comfortable victories, something that won’t be as easy as the season progresses, especially this Saturday.

Hoppers impressive style of play last Saturday saw twelve tries scored, with Ben Pearson scoring on his debut and Will Clapham on his first start in the team. Tom Walker who was also starting for the first time, was successful in converting seven of all the tries scored in the game.

The seventy seven points haul was the biggest winning margin at Lightfoot Green since Hoppers defeated Otley by ninety points to five near the end of the 2011/12 season. A game in which, of Hoppers fourteen tries scored, Dominic Moon’s seven is very probably still a record for a forward in the National Leagues.

Before relegation at the end of the 2010/11 season into National 2 North, Otley had lived in the upper levels of league rugby since gaining promotion at the end of the 1990/91 season from the Courage Division 4 North. When our two clubs met at Lightfoot Green that season, Hoppers came out on top by sixteen points to four. Hoppers and Otley next met in league action during our first season at Level 3 rugby in 1999/2000 when the Yorkshire side did the double over Hoppers. This was to be for just one year, with Otley gaining promotion once again.

The playing record between this week’s opponents goes way back to April 1929 when Otley played Hoppers whilst they were on an Easter tour. The home team ran out winners that day but suffered a comprehensive defeat the following season at Otley’s Cross Green ground against what was thought to be one of the strongest sides in Yorkshire.

There was then a considerable gap in time before the two clubs met again, but once that happened in 1961, games were played each season through into the “Leagues” period.

The records show that there have been fifty one previous games played between the two clubs with this Saturday’s opponents holding a slender lead of just one victory plus two matches being drawn ten points each back in the 1994/95 season and the afore mentioned nil-all draw after the last meeting. Five others being cancelled. Amongst the games that have been played, League encounters number just fifteen with seven victories credited to each side plus the drawn game.

Looking back at Preston Grasshoppers last success over Otley in Yorkshire back on the 13th of September 2014 (which coincidentally was also the second game of the season), Jack Ward, Lloyd Davies and Sam Kindred were try scores with Lewis Allen collecting the extras. The Hoppers squad for that game featured survivors in the shape of Pete Altham, Ali Murray, Chris Taylor, Dan Madden and the returning Harry Moulding still at Lightfoot Green.

Just a reminder that the 1869 Club are running a coach to the game with a lunch stop en route. The party will leave the clubhouse at 10:30 but anyone who wants to be picked up on the A59 after the M6 Tickled Trout junction can be accommodated if they contact the General Office who will pass the message on. 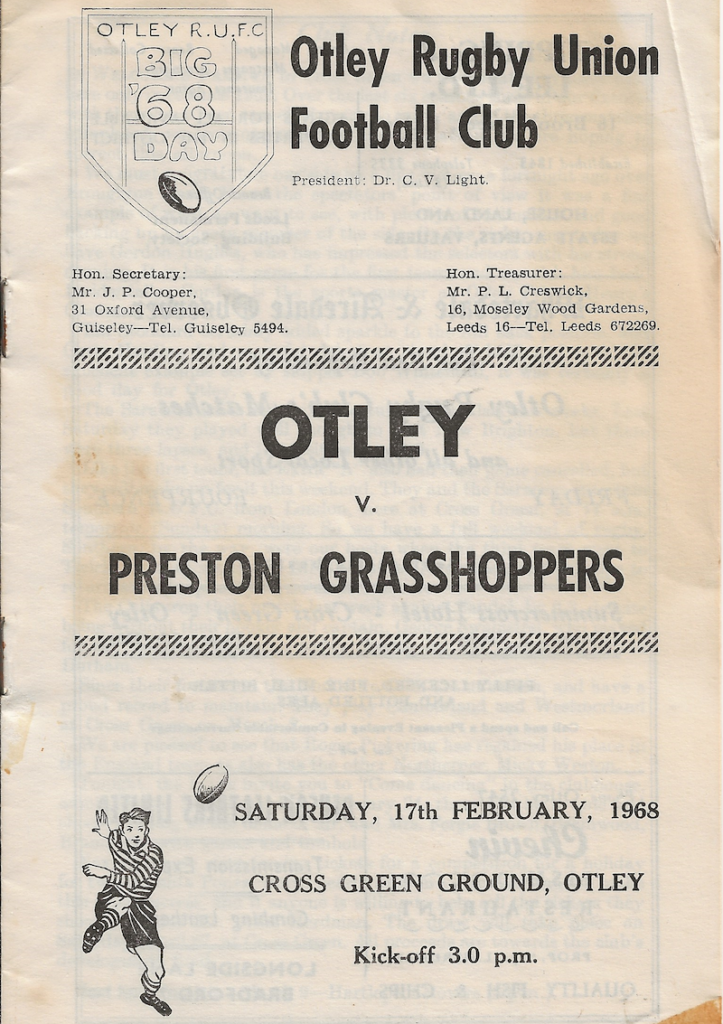