Hoppers’ Head Coach Paul Arnold heaved a sigh of relief after this pulsating contest: ‘That was a tough match that could have gone either way and, in a way, we were a bit fortunate. Blackburn are a good side and we were suckered into playing there game. But I’m proud of the lads – we never gave up and took our chances.’

The statistics reflect that these were two evenly matched sides: 146 points scored over three meetings with 2 draws and one win for Hoppers by just 2 points and once again it was a nip and tuck contest.

The home side were first on the scoreboard after just 9 minutes when a mid-field break was finished by Jack Granby and Paddy Gaffey converted. Another break followed but Ben Pearson rescued his side with a long clearance kick and then converted a try from Ally Murray after a 5-metre line-out drive.

But from kick-off, Hoppers’ tackling was again found wanting in mid-field and a try from Scott Richardson duly converted restored the lead at 14-7.

Hoppers regrouped and a mazy rum from Tyler Spence gained field position and from the breakdown, a wide pass to Jacob Browne saw the wing outpace the defence to score under the posts and the kick levelled the scores again.

Hoppers’s pressure produced a series of penalties but after hitting a post with one effort, Pearson opted to use the touchline from three further kicks but the line-out was malfunctioning and three opportunities to capitalize were lost. But at last they got it right and skipper Chris Taylor crossed unopposed and the kick was good to put the visitors in front at 21 -14 for the first and only time in the match.

But the lead was short lived, as strong running from the home side continued to break tackles and Richardson was in for his second and the kick made it even at 21-all at the break.

The second period started in similar end to end play and the respective kickers exchanged penalties before Blackburn changed tactics and a shrewd chip through behind the defence produced more on-line pressure and a further try for Richardson. Gaffey added the extras but was unsuccessful with a penalty which would have extended the lead.

As the game drew to a close, fatigue began to set in and Hoppers gained some dominance in the tight to enjoy possession and with time running out a run from Taylor found Toby Harrison on hand to touch down and Pearson’s nerveless kick levelled the scores at 31-all.

The final whistle followed shortly after the restart and Hoppers celebrated since, under competition rules, the away side goes through. 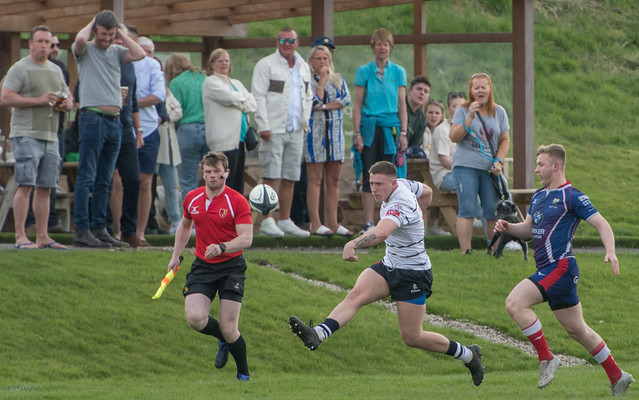