On a cold and crisp November morning as the frost thawed, Hoppers IIIs slowly arrived in Hightown to play a top of the league clash against Crosby St Mary’s.  Early doubts over a frozen pitch were dispelled as the sun melting the frozen ground managed to turn one half of the smallest pitch in Halbro North West League into a quagmire and the other half into a hard but playable surface.  Neither side was keen to get out into the cold early, but this was soon put aside as the two sides went through short and aggressive warmups in preparation for the game.

Hoppers started playing into the low sun that caused problems all day under the high ball and late arrivals caused last minute changes to the starting XV.  An early hard run from Warren Long caused the Crosby tacklers to lay over the ball and Jake Ellwood slotted the resulting penalty from the Crosby 10m line.

Hoppers dropped the ball from the kick-off but this brought the first scrum of the game.  Hoppers clearly with a significant weight advantage dominated the first scrum and this was to continue throughout the game.  Poor decisions by Hoppers and tactical kicking by Crosby into the sun allowed Crosby some possession in the Hoppers 22 and this soon tuned into an easy penalty for Crosby to make it 3-3.

Hoppers then dominated the possession for a period, dominating the scrum, secure ball from the line out and heavy carries from Daz Hill and Nick Johnson forced a desperate tackle to deny a try in the corner for Wez Bradford. Hoppers stole the Crosby defensive line out and a well worked maul was finished off with a try by Warren Long excellently converted by Jake Ellwood from out wide.

Continued Hoppers dominance in possession was wasted when a penalty was kicked dead on the full from the half way line and Crosby now actively avoiding the scrum opted for the 22. Olllie Parkinson took the restart superbly but was penalised for holding on.  A series of Crosby penalties saw Hoppers saved deep in their 22 by the Crosby 13 dropping the ball with no defence in front of him.

Hoppers dominant scrum gave Richard Sands an easy platform to miss the 10 and see the ball bounce around the Hoppers 5m line.  Tony Spence saw his opportunity and scooped up the ball one handed and ran at the Crosby defence.  Bouncing two tackles and then free in the open he continued to advance, ably followed by Paul Hilling offering him the option he continued to break another 2 tackles, throw a dummy and run the length of the pitch to score an excellent individual try in the corner.

The tough conversion was missed, and Crosby came back at Hoppers, Hoppers discipline creaked and a series of 4 penalties in quick succession saw Crosby camp in Hoppers 22.  A fantastic crunching tackle from Luke Jackson saw their attack stall before Hoppers were again caught offside and 3 penalties in quick succession in the red zone saw the referee award Crosby a penalty try just before half time.  Hoppers going into the break the happier side at 10-15 up and the low sun now there to hinder Crosby.

Crosby started the second half the brighter side but the pressure was eased by some hard running from deep by Declan Norrington, Crosby now attempting various shenanigans at the scrum to try and combat Hoppers dominance lead to frustration and time wasting.

Hoppers pack continued to gain the hard yards with runs from Luke Jackson, Declan Norrington and Nick Johnson saw Hoppers dominate possession and gain territory.  After a period of time camped in the Crosby 22 a poor kick allowed Tony Spence to counter attack giving excellent field position that saw a well worked back move find the 2ndrow Nick Johnson in the centres, he stepped inside, turning the Crosby defence and gave a perfectly weighted pass opening up the field and giving Callum Foster a clear run into the corner from the 22.  He took it well and executed the try. The difficult conversion was missed and Hoppers were in a commanding 10-20 lead with 20 minutes to go.

Hoppers continued to dominate territory and possession despite hard runs from the Crosby 12 and continued control of the game from the Crosby 10.  A desperate clearance kick from the Crosby 13 saw the Hoppers 3/4s caught out of position and the scrambled defence lead to a series of penalties and Crosby able to take advantage and run in another try against the run of play.  They converted it and went into the last ten minutes 17-20 down.

Crosby now had their tails up and ran hard at the tiring Hoppers defence, A hard pick and go from Richard Sands released the pressure at the critical point inside the Hoppers half and caused Crosby to knock on trying to steal the ball from the breakdown.  Hoppers dominant scrum gave Alex Cuffin the chance run into open play and he danced through the Crosby defence.  This opened up the game and Jake Ellwood was denied a late try by an excellent cover tackle in the corner from the Crosby 7.  Crosby kicked clear and the Hoppers counter saw 2 high tackles and give the opportunity to extend their lead. Jake Ellwood missed the penalty from the 10m line and this allowed Crosby to counter with great spirit.  A well worked move from the Crosby 10 saw their centres advance 40m and again Hoppers discipline slip and give away a penalty inside the Hoppers 22 straight in front of the posts.  Crosby slotted the kick over easily and the game went into a frantic last few minutes at 20-20.

Hoppers exploited their dominant scrum and continued to dominate possession as they had done all game and panic passing from Crosby gave Alex Wood the chance to pick up the ball 5m out and dive over for a winning try.  As half of Hoppers celebrated the referee called a knock on and Hoppers had to pick themselves up for the scrum.  Hoppers were encouraged by their Captain Cory Wallace and the early shove was on as the ball entered the scrum.  The Crosby front row cynically collapsed causing the scrum to stop and allow their 9 to get the ball away. Crosby kicked the ball out happy to take a draw whilst Hoppers left the field dejected knowing that they dominated possession, territory and the set piece yet failed to take the away win. Full credit to Crosby who never gave in and continued to come at Hoppers throughout a game they should never have been in.

Special mention to the MoM Luke Jackson who ran the ball hard at the Crosby defence all game and tackled with a weighted ferocity that stopped the Crosby attack from going near the Hoppers fringe defence. 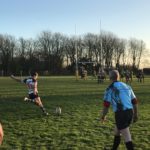 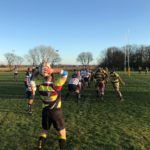 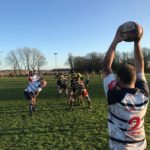 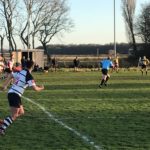 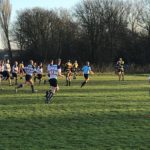 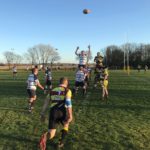 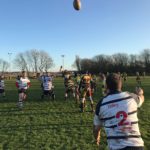 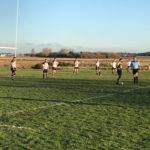