A decent crowd turned out to watch Hoppers take on last year’s Lancashire Cup champions, Blackburn. This was the first time for a number of years that the club has been involved in the Cup competition and as this was also the final pre-season match, the lads were looking to redress the losses of the previous games and move on to the season proper with a solid win under their belt.

And so, on a warm, still, late summer evening with the floodlights on, Blackburn kicked off. Ally Murray collected and the ball passed quickly through several players to Tyler Spence who, having made a trademark break, gave it to Sam Stott to trot in under the posts after just thirty-eight seconds. Alex Hurst had no trouble with the extras and Hoppers were 7 – 0 up inside two minutes.

The home supporters must have thought they were in for treat but Blackburn obviously had other ideas. From the restart they threw themselves into the game setting the pattern for much of the rest of the match as they attacked their host’s half with speed and intensity and after a stoppage for an injury to Hoppers’ Joe Prior, they gained a lineout on their hosts’ 5m line.

With Blackburn pressing their line the Hoppers’ defence held good until Blackburn were awarded the first of many penalties in front of the posts.

Play was then stopped again for an injury to Hoppers’ prop Pete Altham who, after being treated on the pitch, was escorted off with a damaged shoulder and replaced by Sam Wallbank.

When play resumed Blackburn opted to scrum rather than take the points but their decision was vindicated when their number five, Corey Logan, himself an ex-Hopper, crossed the line. The conversion failed and Hoppers remained in the lead by a slender two points.

Blackburn then proceeded to dominate the game with powerful attacks, fast handling and ferocious tackling. Hoppers were defending deep in their own half for much of the first period. Things didn’t get any better when Murray was shown a yellow card for a high tackle and for the following ten minutes Hoppers had to defend the Blackburn onslaught with fourteen men.

Blackburn were strong in the scrum and the Hoppers’ pack were unable to apply their usual drive which had been so obvious against Rotherham. The home side could not settle and spilled passes and penalties against them increased the pressure until after twenty-five minutes Blackburn scored their second try through number four Scrivens which was successfully converted by Fifield.

Hoppers restarted with a ball deep into the opposition 22 and managed to gain possession only for a fumbled pass to deny any further advance.

Play continued with a succession of scrums and penalties against the hosts resulting in a half time score of 7 – 18.

Blackburn had been the stronger side throughout the half with Hoppers scrapping for whatever they could get only to lose possession through sloppy handling and poor decision-making. Hooker Chris Taylor who was captain for the match in place of injured PJ Millea was not having the best of lineout games with the ball all too often thrown long to the back and lost.

Hoppers had given away far too many penalties and their greatest strength, the ability to drive teams back, was not effective.

After what must have been an interesting halftime talk, Hoppers took the field with the injured Prior replaced by Ben Dorrington, only to see their restart kick fail to carry ten metres.

The match then settled into the pattern of the first half. Scrums and penalties all over the field, some short breaks by the Hoppers which were halted by a miss-timed pass or a handling error.

Blackburn missed two penalties from thirty five metres in front of the post and would rue their decisions to take three scrum penalties in front of the goal in the first half, when, after they had had control and were running the ball with pace and confidence, Scott Jordan broke from the Blackburn 10m line and raced towards the posts. He was tackled short of the line but support was on hand and James Fitzpatrick touched down. Hurst again converted and with twenty minutes of the match remaining the score narrowed to 14 – 18.

From the restart Blackburn gained a lineout on the half way line. The ball was collected but then a bout of massed ‘handbags’ broke out after a Hoppers’ player was tackled off the ball. The referee called both captains for a chat with the result that Blackburn’s Gale and Hoppers’ Jordan were both shown yellow cards.

The incident seemed to spark the home side into life. From a lineout on the Blackburn 15m line the Hoppers’ forwards finally drove the tiring visitors and a delicate chip from Hurst gave them a lineout on the opposition 22. This time the throw was good and Matt Lamprey peeled away to score a third try for Hoppers. Hurst’s conversion attempt slid past the post but now the home side were in front at 19 – 18 and ten minutes of the match to play.

Ryan Carlson, who had been subbed earlier, replaced Ally Murray and Hoppers were then awarded a penalty which took them to the half way line. From the lineout Fitzpatrick made a good twenty-five metre break but was halted by another penalty to Blackburn on their own 5m line. They cleared the ball towards half way but it was collected by Spence who then tore through the opposition and, passing the ball through several players, it was taken by  Lamprey to score his second try. Hurst took the conversion from almost the same spot as before but this time he made no mistake and the ball parted the posts with ease.

With only five minutes of the match remaining Hoppers saw the game out with some dogged defending and at the final whistle the score was 26 – 18.

After the match Arnie gave his customary honest assessment of the performance,

‘Not a good match. All credit to Blackburn, they came with intent and wanted the result. They are a big, physical side with some class players and they made us work.

In the first half we were the architects of our own downfall, discipline was poor, we made poor decisions and far too many mistakes.

In the second half we started slowly and although for a time it looked like being just a continuation of the first half, our quality and fitness showed in the final fifteen minutes.’

It was good to get the win in this, the last of the warm-up games and now we look forward to the start of the season opener against Sedgley Park here on Saturday 7th September.

Don’t forget the International Competition this weekend, come down and enjoy what promises to be an entertaining two days. See the website for details. 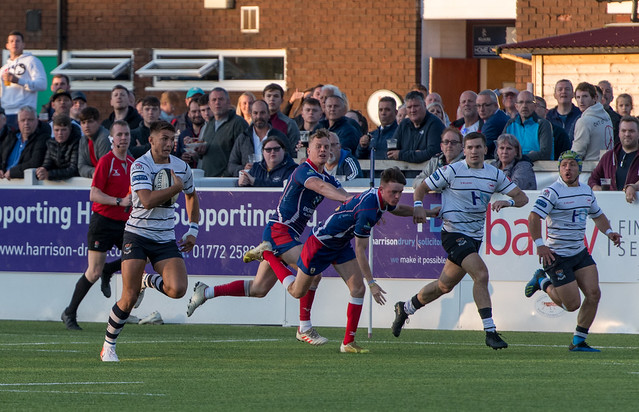