Following the decent performance against Chester last week Hoppers hosted the unbeaten league leaders Caldy, who needed just one point from this game to secure the title and their promotion back to National 1.

Arnie stuck to his stated policy for the rest of the season and again gave places to Robert Meadows and Will Clapham who were joined on the bench by the seventeen year old Tom Walker, making his debut for the 1st XV. There was also a welcome return for Noah Miller, back from injury, and Ollie Trippier completed the replacements.

With Scott Jordan out, Tyler Spence was at full back and Conor Trueman started at eleven with Jordan Dorrington joining Sam Stott in the centre.

The weather was almost spring-like with just a breeze blowing from behind the stand and less of a nip in the air than of late.

Caldy kicked off and immediately had a penalty on the Hoppers’ 10m line. From the ensuing scrum the were awarded another which took them down to the Hoppers’ 5m line and a lineout.

The home side defended well, driving the Caldy pack towards the 22 but conceded another penalty this time for off-side and were sent back to their 5m line again.

Caldy secured the ball and drove for the line but the Hoppers’ defence was solid and this time the penalty was in their favour and they were able to clear the danger.

From a lineout on the Hoppers’ 20m line Caldy pressed their attack moving the ball along the Hoppers’ 5m line resulting in their first try in the corner. The conversion failed but the visitors had stamped their mark on the match with only seven minutes gone.

Hoppers restarted and then made ground when the centre partnership of Dorrington and Stott showed its worth. Stott collected the ball inside his own 22m line and made a break towards the half way line where he was tackled but executed a superb off-load to his partner who then made further ground into the opposition half before the ball was knocked-on.

Caldy attacked again and through some swift passing, worked their way to their hosts’ red zone. Despite some solid defence they were given a penalty in front of the posts and with little wind to trouble the kicker, the score moved on to 0 – 8.

Then things became a little more worrying for the home side when from the restart the Caldy fullback collected the ball and broke to his own 10m line, passed it to their number five who then ran the length of the field to score wide of the posts. Again the conversion attempt missed when the upright intervened but the lead crept on to 0 – 13.

The attacks kept coming and another long break down the wing would certainly have produced another try but for a great saving tackle from Jacob Browne who outran the Caldy man and bundled him into touch.

Hoppers cleared the ball from the lineout but were under pressure again as the Caldy fullback caught the ball on the 10m line and ran through two defenders to score in the corner. This time the conversion was good and with Caldy needing only one more try for the bonus point, the score stood at 0 – 20.

The half played out with most of the action in the Caldy half of the field where Hoppers had several good breaks by Dorrington alone and one with Jacob Browne which took the home side into the Caldy 22.

Handling errors cost Hoppers the chance to finish the moves and the teams went in to the break with no change to the scoreboard.

It seemed that Hoppers had not really been allowed to settle into the game for the first twenty minutes and only in the closing quarter had they begun to put real pressure on their visitors when they were within the 22 for much of the time.

Caldy had shown their dominance early on and having had only a handful of forays into the Hoppers’ red zone had come away with points each time.

Hoppers restarted and with play back in the home half, Caldy were awarded a penalty on the Hoppers’ 22 where, from in front of the posts, the three points were assured.

The visitors pressed on and were attacking the Hoppers’ 22 when a high tackle from Sam Wallbank saw him sent to the naughty step and Caldy lost no time in taking their advantage, scoring their fourth try to secure the bonus point. The conversion missed but the scoreboard was beginning to look like a ‘nil’ game for the Preston lads, something which quickly looked even more ominous when the Caldy fly-half broke to the 22 and passed to the supporting twelve to score the fifth try of the match. This time the conversion was good and with over a quarter of the match remaining, things looked difficult for Hoppers at 0 – 35.

Tom Walker, who came on shortly after the second half began, restarted with an excellent high, hanging kick which allowed the rushing forwards to collect it.

Possession was lost in the tackle and Caldy were able to make another break down the wing which was again halted by another try-saving tackle this time by Spence who suffered an injury from his efforts and the clock was stopped for him to receive treatment.

With the backs making good plays, organised by Walker, they made several forays towards the Caldy 5m line but then Hoppers were ‘in the wars’ for the next few minutes with Ryan Carlson receiving attention on the field and eventually replaced, followed minutes later with another time-off as Browne was helped to the dug-out.

Despite these losses Hoppers made a renewed effort and pressed the Caldy line. Matt Lamprey went over but the referee decided the ball was held up. The home side were now even more determined to finish the game with points and from the driven scrum Lamprey was able to execute a trade-mark try, diving over towards the corner. Jake Squirrell’s conversion attempt from wide on the wing failed but at last the prospect of a ‘nil’ score was removed.

Caldy however, did not give up and with only seven minutes of the game left scored their sixth try, this time converted, and five minutes later, with their forwards camped on the Hoppers’ line for a series of phases in which Ollie Trippier fell foul of the referee and was yellow carded, they added to their tally with a seventh converted effort to make the final score 5 – 49.

Arnie was not too disappointed by the performance,

‘They were the worthy winners. They are a very good side with good coaches and fans who appreciate the game.

Their coaches said that this was the most clean breaks they have conceded all season, we carved through them seven or eight times but just couldn’t finish. They made a handful of attacks and came away with points each time.

I was pleased with the players. Tom Walker on at just seventeen, making his first team debut against the unbeaten league leaders, acquitted himself very well, bossing the lads round him, making good ground with a couple of carries and putting up some decisive kicks . Jordan Dorrington at thirteen had a good game and Clapham and Meadows looked sharp when they came on. This is a young side, Lamps is the eldest at thirty and the age range goes down to seventeen! We are looking at a squad which will be good for several years and one that we believe will enable us to return to this league sooner rather than later.’

And so, with another ‘weather weekend’ next Saturday when we can all (hopefully) watch what’s left of the 6 Nations, we have a break before taking the bus to Loughborough on the 21st.

Five matches remain to give this young side a work-out before the summer break and will build a base from which to begin the campaign back to this league, or whatever is in place after the re-organisation of the level four regions by the RFU. 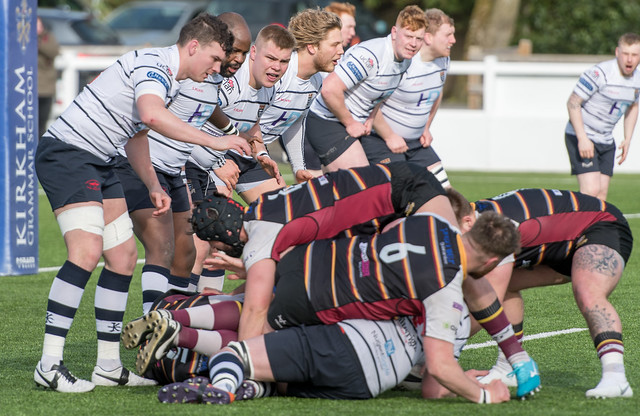