When the Head Coach sits down to give his comments on the match and starts off by saying,

“I’m embarrassed with that display”,

you know it’s not been a good afternoon. He went on to say,

“We were out worked, outnumbered and out enthused all over the pitch. That was the worst second half I have ever seen since I’ve been here.

The frustrating thing is that we had good possession under the posts in the first half and broke to make good yards but then threw the ball away time and time again.

There will be changes next week, players have to earn a place, and we need some people to step up and be leaders on the field.

Caldy will be a tough game next Saturday but oddly enough it is the sort of match to spark a backlash from this and maybe a win.

We have got to keep possession and turn it into points.”

Conditions were better than forecast as the rain which was predicted to be heavy throughout the game did not really turn up. It was bitterly cold and the stiff breeze added to the chill factor by several degrees for the watching supporters.

Chester kicked off and the all too familiar pattern of the matches this season began to unfold with the ball being knocked-on by Hoppers. From the scrum Chester kicked to the 22, the ball was cleared to around the 10m line to give a lineout to the visitors. Having collected it, the Chester forwards moved through seven phases to the Hoppers’ 5m line to score their first try after less than five minutes of the match. The conversion from wide on the wing fell short but once again the home side were in deficit early into the game.

Hoppers restarted and gained a lineout on the Chester 22 and then a scrum but the ball was secured by their visitors and cleared towards the half way line.

Things looked a little better when the home side drove a scrum on half way from which Tyler Spence was able to make a break to the Chester 22 before he was tackled but with referee playing advantage Hoppers had a penalty on the Chester 10m line. Nick Gregson opted to take the points and moments later the ball sailed over and the lead was narrowed to two points.

After a break by Matt Lamprey which moved play into the Chester half Hoppers were awarded another penalty which found touch on the 22. The lineout was lost but then the home side was given a scrum and a burst from the backs moved the ball swiftly from Gregson to Sam Stott to make ground and pass back to the supporting  Gregson to score just wide of the uprights.

He converted his own try and Hoppers took the lead 10 – 5.

Chester rallied and made several breaks into the Preston ‘red zone’, moving the ball with speed through their back line and less than five minutes after their hosts had taken the lead Chester had levelled the score with another unconverted try.

Having started for the first time since his recovery from injury, Oga Mabaya was replaced by Dan Madden after thirty minutes. Hoppers appeared to by getting the upper hand in the last quarter of the half with breaks by Spence and Jacob Browne making good ground into their opponents’ territory.

The forwards fought well inside the Chester 5m line for a succession of phases with no reward. Then Spence was shown a yellow card for a technical offence and with five minutes to the break, after working hard to stay in the Chester 22, Hoppers gave away another penalty, Chester cleared and gained a lineout on the Preston 5m line from where their number 8 trundled over the line.

Despite being a man down, Hoppers returned to the Chester 5m line and the forwards resumed their pressure with a series of phases across the front of the posts. A yellow card shown to the Chester 6 evened up the sides but still, time and again, they headed for the line only to be repulsed. When they were eventually given a penalty they opted to scrum in front of the posts instead of taking the points. The ball was lost forward and Chester cleared their lines, keeping possession for a further five minutes until the whistle blew for the break after a forty-five minute half.

Chester had used their possession of the ball well and moved with real pace when attacking the Hoppers’ half. Their backs were well organised and broke through tackle after tackle on their way forward.

Hoppers, by contrast, could not seem to hang on to the ball with wayward passes and knocks-on scuppering their efforts.

The last ten minutes of the half had been encouraging with the home forwards camped on the Chester line but when they came away with nothing, that passage of play proved to be the last really concerted attack of the game.

With the score still at a retrievable 10-15, all was not lost, however, just fifteen minutes into the second period Chester extended their lead with the fourth and their Bonus Point try to make it 10 – 22.

To add further woe to the home side, Scott Jordan was shown a yellow card for a deliberate knock-on and Hoppers were down to fourteen again.

Chester capitalized on their advantage and it was only seven minutes later that they scored another unconverted try to seal the match.

Play limped on with penalties and scrums up and down the field but with no further score it came as some relief when the referee blew the final whistle with the score 10 – 27.

It may have been Remembrance weekend but this was a truly forgettable performance.

There is a supporters’ coach going to Caldy next week and the list will be on the noticeboard as usual. Let’s hope we see some sort of come-back….. please. 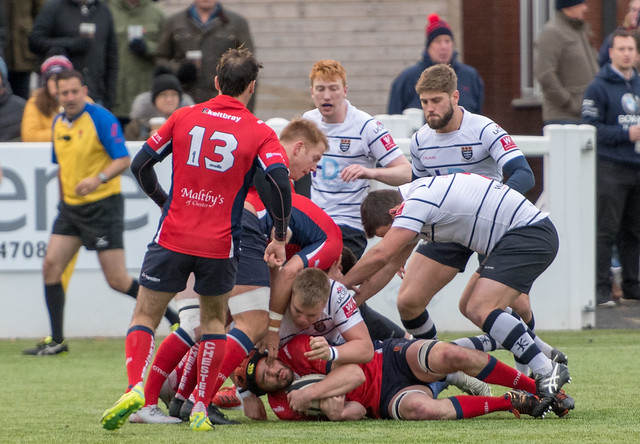