Speaking before the match, Arnie was upbeat about the team he’d been able to select and he assured us that he’d written to Father Christmas to tell him that he’d been a good boy all year.

After the solid performance last week away at Otley which produced that rarest of rugby statistics, a nil-nil draw, the home faithful were hoping for a good result from today’s match against the ‘Old Enemy’. There were two significant absentees from the squad, Ryan Carlson, not yet recovered from the injury he received in the Otley game and Captain PJ Millea who was struck down with illness this week. We all wish him a speedy recovery and look forward to seeing him back in charge very soon.

Lightfoot Green was bathed in winter sunshine as the largest crowd of the season began to fill the ground. There were Christmas jumpers, Santa hats and a whole host of fancy dress characters ready to enjoy the last match before the festivities begin.

Fylde kicked off and immediately started to press the Hoppers’ 22m line. The ball was cleared to the 10m line where the home side were given a penalty which moved them on towards their visitors’ 22.

They collected the ball and began a trademark drive but once again, as in so many games this season, they were penalised and from the scrum Fylde broke away and through quick phases and accurate passing they gained the half way line where only the touch line prevented any further progress.

Play continued around the middle of the pitch and Fylde had another scrum just inside their own half. The ball came out to winger Carleton who left defenders in his wake as he broke to the Hoppers’ 22 where a penalty gave his side a lineout on their hosts’ 5m line.

They gathered the ball and a simple push over sealed the first points when hooker Gregory touched down. Smith added the extras and after seven minutes they were seven points up.

From the restart Hoppers mounted an attack which had them battling the Fylde defence along their 10m line for several phases. They were awarded a penalty for their efforts and Tom Davidson readied himself to put the opening points on the scoreboard only to watch his kick fall low before the posts.

Fylde restarted with a drop out which was collected by the Hoppers forwards who again put phases together and gained ground only to lose possession from a knock-on. Fylde came back at the Hoppers’ forwards who put in some huge hits to peg them back and eventually have a scrum on their opponents’ 20m line.

This time they drove the Fylde pack and were awarded a penalty but once again the kicking gods were not smiling as Davidson’s attempt slid wide of the upright.

Hoppers continued their assault led by, amongst others, Will Davidson and Sam Wallbank who made several breaks into the Fylde 22. Hoppers made good use of the ball from these runs and mounted some fast phases which took them to the Fylde 5m line but, once again the demon penalty stopped their attack and the ball was cleared. A lineout on the Fylde 15m line led to a scrum for the visitors where a penalty against them allowed Davidson another chance to get the score rolling. This time his aim was true and with twenty one minutes played the score stood at 3 – 7.

Play then moved into the Hoppers’ half as Fylde mounted a concerted attack inside the 22. Penalties and re-set scrums kept the pressure on the home side until Carleton received the ball from yet another scrum and darted for the line.

The initial decision by referee Benjamin Davis was that the ball had been held up, however after consultation with his eagle-eyed Assistant he was satisfied that the ball had indeed been grounded and the try was awarded. With Smith converting from directly in front, the two points were never in doubt and the score moved further on to 3 – 14.

Carleton struck again less than four minutes later when he broke from his own half into the Hoppers’ 22 where a deft pass to the supporting full back Wilkinson sent him over just right of the posts. Smith’s conversion was good and Hoppers were now 3 – 21 down.

Hoppers rallied and the last five minutes of the half had them pressing the Fylde defence with some powerful attacks. Things looked hopeful when Ally Murray burst through three tackles on his way to the 22 where he was able to pass the ball to Sam Stott to race up his wing only for the ball to be lost forward in the tackle. But the attack continued as Matt Lamprey stole the ball from the scrum and broke to the Fylde 5m line. Surrounded by the defending forwards, his offload was not caught and at the whistle the teams went in without any further change to the score.

The second half started with an early penalty attempt by Fylde to increase their lead. Fortunately for the home supporters Smith’s kick for goal missed and play resumed its first half pattern with Fylde attacking with speed and confidence and Hoppers defending resolutely, often deep in their own half.

Another break by Lamprey started a rare passing move along the Fylde 10m line only for the ball to be lost forward. Fylde came back and when Oga Mabaya was deemed to have tripped a player whilst on the ground, he was shown a yellow card and sent to the sin bin.

The game then became more fractious and from a Fylde lineout on the Hoppers’ 10m line a serious bout of ‘handbags’ resulted in a stern talking to the naughty boys from Mr Davis.

Things didn’t improve straight away as only a couple of minutes later Murray appeared to be lifted in the tackle and dropped unceremoniously to the ground. Hoppers were allowed a penalty on this occasion and moved down to the Fylde 22.

From the lineout they began to drive the maul but then were themselves driven back and the resulting penalty scrum enabled Fylde to mount another lightning attack, passing the ball at speed through several hands to the waiting Carleton who, with twenty five metres in front of him was not to be caught as he crossed the line for the Bonus Point try. Once again Smith was on target and the game played out without any further score leaving the final tally 3 – 28.

Arnie was disappointed, ‘We made far too many basic errors. Forward passes and knocks-on cost us. We had sixty percent of the possession in the first half with just three points to show for it. We created enough chances to show what we can do but far too often the ball was lost in the final move. Simple errors are still costing us and today shows why they are at the top of the table and we are at the other end. We are in a real dogfight now and to stay in this division we need much more accuracy. Basic handling and choosing the wrong options need sorting. They punished our mistakes and we need to be more clinical.

With PJ out for a while and Fitz and Howard injured today the Christmas break is very welcome. We have to make a strong start to the New Year.’

Let’s hope the lads can turn things around like they did last season. It’s a much taller order than that one but they will approach it with the same heart and commitment.

We start again on the fourth of January after the sesquicentenary celebratory pantomime (‘Oh yes it is!’) Don’t forget to book your tickets early to avoid disappointment.

Have a very happy Christmas and an equally enjoyable New Year! 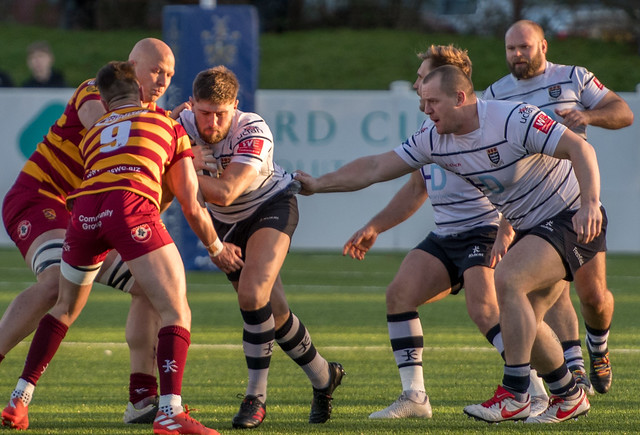