Hull arrived at Lightfoot Green after two good back to back wins had moved them up to eleventh in the table. Hoppers needed to get some points from this game to start their long climb back to safety in this league so on paper this was set to be a cracking match.

It was a grey, wet and chilly afternoon as Hull kicked off under the floodlights.

Hoppers’ forwards secured the ball and began to move steadily up the field going through several phases and gaining ground with good passing and strong tackling, Ally Murray bouncing his opposition away as he broke towards the Hull 10m line.

A quickly taken tap penalty had James Gough heading towards the 22 and although that attack was repulsed, Hoppers were immediately back with a delicate kick from Alex Hurst which took play right into the Hull 5m zone.

The visitors’ defence held out and play moved back up the field where Hull winger Birch broke away and blazed downfield only to be tackled on the line where the ball was deemed to have been held up.

Hull had a scrum and this time it was their number 12 Johnson who made for the line but on reaching it dropped the ball in the tackle and Hoppers were able to clear their lines.

Play then centred around half way and possession swung back and forth until, Hull were awarded a penalty on their hosts’ 10m line where fly half, Humberstone, wasted no time in putting their first points on the board.

Hoppers pressed on and mounted another attack deep into the Hull half, started by Matt Lamprey with a break from half way to the 22 and on to the try line but the ball was then knocked on.

Having collected the ball from the Hull scrum Hoppers moved forward again and were awarded a penalty of their own just left of the posts. Nick Gregson , playing at 10 today, set the ball up but then watched it slip wide of the upright. A chance to square the score had gone.

Hull kicked the drop out restart which was brilliantly secured by Murray high in the air although, however, in the follow-up play, Hoppers were offside and Hull were able to clear once more.

Back came Hoppers and through a series of drives and penalties they made their way to the Hull 22 where a break by Sam Wallbank got him round the defence where passed to Gregson to cross the line, left of the posts.

He then converted his own effort and for what seemed the first time in a long time, Hoppers’ possession had at last turned into points.

From the restart the rushing Hull players got under the ball but it was lost forward. Hoppers had the scrum and drove their opposition, gaining a penalty on the 10m line. The ball was collected from their lineout and Lamprey broke away, made good ground before passing to the eventual Man Of The Match, Adam Howard who moved ever closer until there was yet another knock-on.

The scrum was reset twice and play became somewhat scrappy until, having gained a lineout on their own 10m line, Hoppers broke through with Scott Jordan starting the run, passing to Gough to continue before he moved it on to James Fitzpatrick to make the line only for it to be again knocked-on in the tackle.

The scrappy play continued as Hoppers kept up the pressure in the visitors’ half. A hand in the ruck resulted in a trip to the naughty step for Hull second row Curry and Gregson made no mistake with the penalty so that, at half time the teams went in 10 – 3.

This had been a much better and more fruitful half for Hoppers than of late. They had had most of the possession once again but had managed to get points from it, something that has frustrated them throughout the season so far. The forwards had battled their way into the Hull defence time and again and there had been several good breaks which had given real opportunity for scoring only to be denied by a saving tackle or knock-on. They had driven the visitors in the scrums and mauls and the kicks had been finding touch.

Hull looked dangerous with the little possession they had had but were being prevented from mounting any consistent attacks by the ferocious forward play.

The second half began well for the hosts as, having once again made their way into the Hull 22, Hoppers were awarded a penalty in front of the uprights and Gregson added a further three to the score.

The Preston faithful could have been excused for thinking they might see not only a win, but a five pointer at this stage with all the pressure and possession going with their team, things were as good as they had seen for some time.

However, at half time the Hull coach had obviously put a friendly arm around his team and suggested that they might do well to start playing. And they responded.

From the restart they pushed forward with a rapid set of phases which took them deep into their hosts’ 22 and their first try from their centre, Johnson. Humberstone converted and the margin was cut to three points.

This galvanised the visitors and they then tore into the Hoppers’ forwards, ferociously tackling their way down towards the home 22 where they gained another penalty, 25m out.

Humberstone took up position and as the ball sailed over the bar, the score was squared at 13 – 13 with over half an hour to play.

Hoppers had not been able to really capitalize on their opponents’ yellow card, adding only three points during the ten minutes, compared to Hull’s converted try and now, with the score tied, the final thirty minutes were hugely important.

Hoppers resumed their pressure, the forwards surging towards the Hull red zone only to be kept out each time. Play was fast and furious and moved between the two 22m lines for some time until Hull had a penalty on half way and quickly moved the ball through several players to their right winger who then gave it to number 6, O’Donnell who broke through a tackle to score in the corner.

The conversion attempt from wide on the wing failed but with over ten minutes of the match remaining, Hull had a significant lead with the score at 13 – 18.

They now had the momentum and the play seemed to be almost entirely with them. Only stubborn defence kept them out even though yet another try looked possible when the Hull hooker, Jobling suddenly found himself alone in no-man’s-land and seemed so excited that he set off on his run with a hop and a skip a la Jonny May only to be tackled as he trundled towards the 22.

Hoppers regained possession and mounted yet another series of passing phases towards the Hull 22 when that demon which appeared to have been put away reared its ugly head as the ball was kicked forward and possession was lost.

The whistle blew for full time and whilst the match was lost, Hoppers came away with their first point in six games.

Arnie was back to his ebullient self again,

‘That was a big improvement all round, the first half was good even though there were a couple of tries left out there. The heart, passion and determination were all there and even though we went behind, the team kept on trying.

There were some good performances. Gregson starting at ten played some good moves, Ally had a massive first half and Lamps had some really good breaks. TD is back next week and will be on the bench at Otley so with Goughy back and playing well that should give us some stability.

The lads are really hurting after this one and when you’re down it’s the tiny things that swing it but there are still 80 points left in the season and it’s a long way to go.

We have two big games next up, Otley away is a tough one and, as we all know the last one before Christmas is anybody’s to call. We were in a similar position this time last year and Hull had a very bad start this season too but one good win has turned them around. That’s all we want to kick off our comeback.’

There is a supporters’ coach going to Otley next week and the list will be on the board in the club. The team really appreciate the support they have so let’s get behind them for Arnie’s ‘big win’. 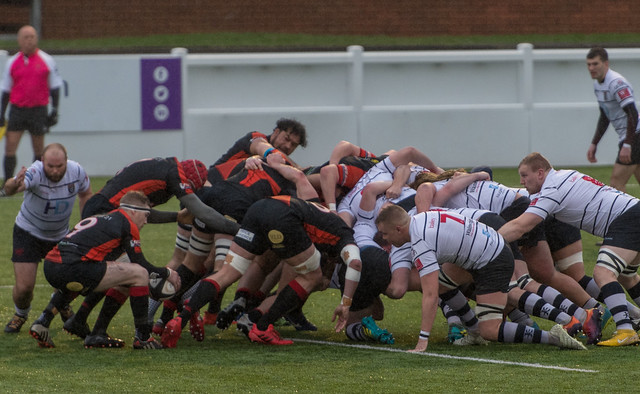