In his preview of this match, Mike Forshaw highlighted the narrow margin of wins for the two clubs in the record of games played, showing Loughborough edging the lead with eight to Hoppers’ six. With both teams occupying positions close to one another in the lower half of the table, this was a game that promised some entertaining action.

Conditions were good for a late November afternoon, with little wind and no sign of the rain that was forecast. The spectators needed their overcoats but the chill in the air was not unpleasant.

The teams were led out by Ally Murray who was not only returning from the injury to his hand but was starting his 200th match for the club.

The team also included James Gough, making a welcome return after the serious injury at the end of last season which has kept him out of the side until today.

With the current run of losses slightly tempered by the late second half performance away at Caldy last week, when the team became the only side to score three tries at Paton Field so far this season, hopes were that Hoppers could replicate some of that performance in this match.

The home side made a promising start. Kicking off deep into the Loughborough 22 they began a series of phases moving across the pitch and pressing the 5m line only for the inevitable penalty to halt the attack and send them back towards the half way line.

Loughborough secured the ball from their lineout and straightaway their speedy winger Fadahunsi broke from their 10m line and shook off several tackles as he made his way to the Hoppers’ 22 where his final pass was deemed forward.

The Hoppers’ forwards looked good in the scrum, driving their opposition and gaining a penalty which took them to the Loughborough 10m line and on into their 22. They continued to pressurize the defence and for fifteen minutes they had the better of the visitors.

However, just when the Hoppers backs were running yet another promising attack towards the Loughborough line, the ball was lost forward, the visitors gained a penalty from the scrum, and seconds later, from a chip forward, full back Kaye broke through several tackles to score in the corner. The conversion by Waters was good and Loughborough were ahead 0 – 7.

It took just three more minutes for the lead to be extended. Gough’s activity around the base of the scrum was considered to be somewhat over eager by the referee and the resulting penalty took the visitors to their hosts’ 22. They collected the ball from their lineout and number 7, Main, again breaking tackles, crossed the try line for their second score but this time the conversion failed.

The half continued with most of the play in the middle third of the pitch where the Hoppers’ forwards were made to work hard to keep the opposition at bay. The pressure was relentless and with five minutes of the half remaining, Loughborough had their third try scored by hooker Bourne which was quickly followed by their Bonus Point, fourth, on the stroke of half time scored by Crampton who received the ball from his fly half on the break and went in under the posts. With one conversion missed and one successful, the score as the teams went to the sheds was 0 – 24.

Despite the encouraging start Hoppers had been out-run, out-tackled and to a certain extent, out-classed by a side, who, although they were good, were being made to look much better.

Hoppers had had too many missed or broken tackles allowing the opposition to gain ground with each attack and for the last twenty minutes, they had not been in the match.

Arnie made changes at the break and with Harrison, Howard and Hurst replacing Millea, Wallbank and Stott the team made a lively start when, from a lineout on their own 22, Jordan Dorrington broke to the Loughborough 10m line.

The ball was lost forward in the tackle but Hoppers won a penalty from the re-set scrum which had been collapsed by the Loughborough pack. They secured the ball from the lineout and Christian Taylor broke the try line under the posts. Nick Gregson slotted the easy conversion and Hoppers began what seemed to be a long road to recovery.

But, Arnie’s encouragement at half time must have stirred them, as less than ten minutes later, with the Hoppers’ forwards driving the visitors in the scrums and mauls, a series of penalties against Loughborough resulted in a penalty try to the home side which narrowed the score to 14 – 24.

Hoppers now seemed to have the upper hand and when a break by Matt Lamprey took him into the Loughborough 22, the pass to Ben Dorrington started a series of phases which enabled Gough to score the third try. Gregson was successful again and now with the gap between the teams just three points, a losing Bonus Point looked a distinct possibility.

With ten minutes remaining and the home side in the ascendency, the supporters were looking at a dream come-back.

Loughborough were awarded a penalty from the restart and opted to go for goal. Waters, who, although he had already missed two conversions, confidently stroked the ball between the uprights.

Hoppers continued to apply the pressure and the watch was stopped several times for attention to apparently injured Loughborough players which slowed the pace of play. Breaks by Hoppers into the visitors’ half kept Loughborough on the defence but once again, the urge to kick the ball when they had possession and were moving forward, proved the downfall for the home side.

Eight minutes from time Loughborough secured the ball on their own 22 where winger Brown made a break deep into the Hoppers half, passed to the supporting Fadahunsi who moved on it to scrum half Lane to score their fifth try. Waters was successful again and the final score was 21 – 34.

Arnie was his usual, honest self,

‘We made a decent start and put pressure on them inside their 22. But then we coughed up the ball and they came away with a try.

They are a good side but we made them look better than they were, playing in the middle third going backwards is naïve and we gave the ball away far too often with knocks on and kicks which didn’t land.

On the plus side, I thought Ally and Goughy had a good returning game allowing that they will need a few more to get back to match fitness, and the last twenty minutes was better all round.

Again, the team is still learning and decision-making let us down once more. There are lots of small errors which are costing us and we need to sort them out’

Next week we make the longest trip of the season to Hereford where we take on Luctonians who, after this weeks’ fixtures, are sitting directly above us in the table at third from the bottom. A good win would make a significant difference to that position for either team so hopefully it will be an entertaining encounter. The 1869 Club have a coach going so sign up and get behind the lads at this important match. 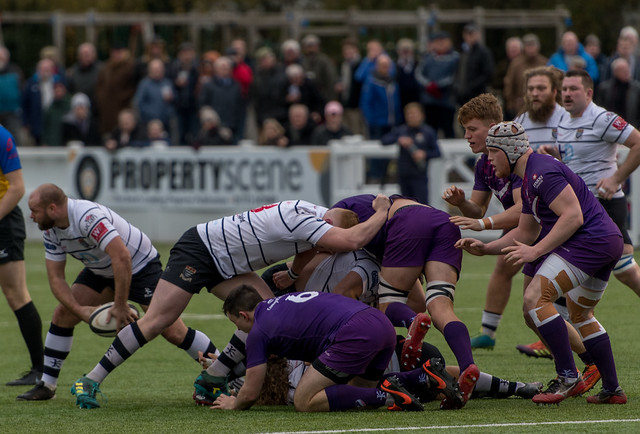