This, the second of the pre-season matches, was always going to be a tough test for the squad. Rotherham, who were an established Championship side until their drop to National One at the end of the 2017-18 season, had come to Lightfoot Green to gain experience of playing on an AGP in preparation for their early season fixture at Rosslyn Park and were expected to provide a serious workout for the home side.

In that respect they did not disappoint their large band of travelling supporters.

Hoppers faced two separate Titans teams under a punishing hot sun and got off to a good start, moving the ball quickly and tackling well which took them into the Titans’ 22 only for play to be halted by an injury to one of the visitors.

When play re-started the ball was gathered from a Hoppers’ lineout and passed through several players to Sam Stott who ran in to score under the posts.

He elected to take the conversion but as he started to kick the ball fell off the tee. Too late to retrieve it, Sam tried to kick it as it bounced only to watch it bumble over the line. Still, Hoppers were five points to the good within the first five minutes.

Sadly, these were the only points collected by the home side as the Titans began to organise themselves and impress their dominance.

Things did not improve when Stott was shown a yellow card for a high tackle and within two minutes of the Hoppers’ try, Titans scored and converted and despite being repeatedly driven in the scrums, they added another seven points ten minutes later.

On the half hour mark Hoppers’ captain PJ was led groggily from the field after a fairly solid tackle and Rotherham crossed the line again to make the score 5 – 21 which prompted an outbreak of ‘handbags’ just before the half-time whistle.

The second half looked very different as the Titans fielded their ‘other’ fifteen in a totally different strip. Hoppers had an extended squad of almost thirty players who swapped in and out of the play throughout the afternoon. However, under the hot sun they now faced another completely fresh team who picked up where their first half mates had left off.

Within minutes of the start the Titans were a further five points to the good and maintaining the pressure of the previous half.

Hoppers were still battling, winning the scrums and tackling with intent and ferocity. Wholesale changes altered the home side significantly but despite some good individual displays and repeatedly gaining ground, this did not halt the onslaught and at the final whistle two more tries had been collected making the score 5 – 40.

Of course, the purpose of these matches is to see how players are performing prior to the start of the season and the new signings gave a good show. Jordan Dorrington, Chris Taylor, Sam Wallbank and Toby Harrison fitted in well and Joseph Prior at 10 showed good command of his troops.

It was also good to see returning faces in the form of Jacob Browne who has committed for the whole season and the guest appearance of long-time Hoppers’ player Sean Taylor who has lost none of his silky-smooth running and passing.

As Arnie said after the match (which he watched from his preferred perch on the roof),

‘It was easy to tell the difference in the levels of the two sides and this was a reality check for the lads. After last season they were full of confidence which is good but this afternoon has brought them down to earth. The first tackle was very poor and the defence were lacking throughout the match. On the other hand, our scrum was very good, driving them with some force and winning one against the head. I was pleased with the pairing of Prior and Jordan at 10 and 9 and Stotty had an excellent game.

We have a goal-setting meeting on Tuesday and two more training sessions before the season starts. We have another difficult start to the season and it could turn out a bit like last year when any team could lose games early on and still win the league.’

The lads are out again next Wednesday evening for a Lancashire Cup match against Blackburn so get down to the club and give them some support in this final pre-season encounter. Kick-off is at  7.30 pm. 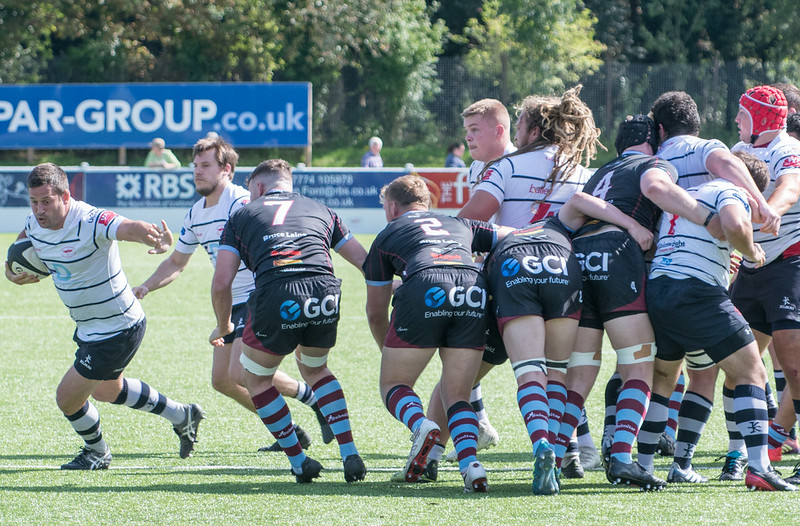