Scunthorpe came to Lightfoot Green for the first time since their relegation from National 2 North along with Hoppers a couple of seasons ago. The home supporters would have been forgiven for hoping they did not repeat their last performance here when, on the first match on the AGP, they took the game by just one point with a converted try in the dying minutes.

That is history and today’s Hoppers side came into the match fresh from the draw against Fylde at the Woodlands in which they had shown their quality and fitness and which Arnie had said, “felt like a win”.

The autumn continued to be kind and it was another very warm, bright afternoon, this time with stiff breeze, which welcomed the teams onto the pitch.

Hoppers kicked off into the wind where the ball was collected deep in the Scunthorpe 22 and driven on further by the on-rushing Preston forwards. Scunthorpe defended well and quickly had a lineout from which their full back, Scammell, broke away and crossed the line to score inside two minutes. The conversion by Cook was good and once again, in a pattern that has been repeated more than a few times, Hoppers found themselves behind with only minutes on the clock.

From the restart they gained a scrum on the Scunthorpe 22. They then drove the visitors towards their 5m line where Matt Lamprey peeled away to start a series of phases with the ball being moved across the field, pressurising the Scunthorpe line.

The visitors defended doggedly and were able to keep clearing their half only to be met by more penetrating breaks by the Hoppers’ backs. Ryan Carlson made good ground and then passed to Tyler Spence, the move resulting in a scrum on the Scunthorpe 22, from which they were awarded a penalty and from the ensuing lineout collected by Carlson, Ally Murray broke through the defence to score Hoppers’ first try of the afternoon. Jake Squirrell slotted the conversion and the match was back to all square with ten minutes gone.

Scunthorpe rallied and a passage of loose play had them with a lineout on the Hoppers’ 5m line and their second try scored and converted by centre, Robinson.

Play moved up and down the field with both sides making fast breaks and defending well. The clock had moved on towards the half hour mark when Nick Gregson tore through the opposition and passed to Spence who went deep into the Scunthorpe half where Jordan Dorrington, who had tracked them both all the way, collected the pass from the winger and gave the ball back to Gregson to score just left of the posts.

He tee’d the ball up himself and a struck a low shot which would have cleared the bar had it not bounced back off the upright.

Hoppers then started to take some control with strong forward play and frequent breaks by the backs in combination putting continual pressure on the Scunthorpe defence. Luke Proctor started a move, passing the ball to Lamprey, on to Gregson and then to the eventual Man of the Match, Toby Harrison to put Joe Prior within metres of the line which resulted in a penalty in front of the posts. Gregson made no mistake and after thirty minutes Hoppers were in front at last.

The home side were now full of confidence and continued to attack their opponents’ territory, driving the scrums and winning penalties. They moved the ball with speed and a break by Sam Wallbank, on as replacement for Murray who had suffered a cut to the forehead requiring stitches, enabled full back Dorrington to score his try in the corner.

With the wind now gusting into his face, Gregson’s conversion attempt from out on the left wing floated wide but the score as the teams went in for the oranges showed Hoppers in the lead 20 – 14.

Scunthorpe had shown themselves very fast on the break, finding gaps and making ground. As has come to be expected, Hoppers ability to defend and make telling breaks of their own more than matched them and despite the visitors’ early score, they were firmly in control by half time.

At the restart Hoppers now had the wind blowing with them and straightaway were awarded a scrum on their own 10m line from where Sam Stott raced thirty metres through the opposition and passed to Sam Wallbank to score the Bonus Point try. Gregson continued his kicking streak and the lead moved on to thirteen points.

Scunthorpe responded and were testing the home defence on their own 22 when the ball was regained and Prior launched a mighty kick which found touch on the visitors’ 5m line.

Hoppers racked up the pressure inside the Scunthorpe half with more and more breaks when a long kick forward by Spence found the Scunthorpe fullback on his own in front of the posts. He watched the ball to let it cross the line but it bounced away from the posts to remain in play by which time the Hoppers players were almost on him. His desperate clearance kick only managed touch at the 5m line and a Hoppers’ lineout.

The ball was secured and quickly moved across the 5m line for Stott to collect and cross the whitewash. Unfortunately the ball left his grasp as he made the touch down and the try was denied. But then, as the referee had been playing advantage, he called for the penalty which gave a lineout to Hoppers on the 5m line and this time Stott was rewarded with his try in the corner.

With the wind in his favour Gregson approached what was still no easy conversion out on the wing but the ball sailed over the bar and the score moved on to 34 – 14.

Scunthorpe restarted only to see Alex Hurst collect the ball and make a searing forty metre break into their half where his pass to Spence allowed the flying winger to run in his try just right of the posts. Once again Gregson did the business and the score became a numerically palindromic 41 – 14.

Hoppers were now able to mount attacks from all over the field and whilst they were confident and enjoying the game, the open play allowed Scunthorpe to pick up a loose ball and a break by Scammell from a lineout let winger McStay in for their third try. Cook’s conversion attempt failed but they had clawed back valuable points and, more importantly, were closing in on a Bonus Point with a quarter of the match still to play.

Hoppers had other ideas though, and from the restart they had a scrum on the Scunthorpe 22. The ball came out to Stott, moved on to Gregson and then to Spence but his try was deemed to have been held up. However, the referee was again playing advantage and from the penalty Toby Harrison went over for the home side’s seventh try which was converted this time by Squirrell.

Things did not finish smoothly though as, in yet another attack on the Scunthorpe line Carlson was shown a yellow card for smothering the ball.

Hoppers maintained their pressure but their opponents found the gap in their fourteen – man side and were able to grab a last-minute try from a break by Morgan which put Caunt in on the stroke of full time for their own Bonus Point try. The conversion missed the posts and the referee’s whistle ended the match with Hoppers’ first win of the season 48 – 24.

Head Coach Paul Arnold’s comments reflected his pleasure at the performance of his team,

“I am very pleased to get the first win and the full five points. At times we looked very good against a Scunthorpe side who were really dogged in defence and for once I didn’t have to shout at half time!

The replacements played well and the 9/10 pairing is working nicely. The scrum and set piece play was excellent and although once again it was a full team performance with both forwards and backs playing really well, I was really pleased with Ben Dorrington coming on at nine. After patiently sitting on the bench in the early games without complaint he has shown his ability to play well in a variety of positions.

Sheffield Tigers will be another stiff test next week but the team is learning all the time and winning like this is very positive for future games. The injuries to Jordan and Ally are not serious and they should be fine for next week”.

The win sweeps Hoppers up the table to seventh and whilst this is still early days, to be in the upper half is a good place from which to progress.

In the two encounters last season Hoppers edged the Tigers by just five points at home and only three away so next week looks like a tasty fixture. Kick off is at 2.30pm as usual so come and give your support and hopefully help the team to their second win of the season.

Click on the photo below to see Mike’s gallery of pictures from the match. 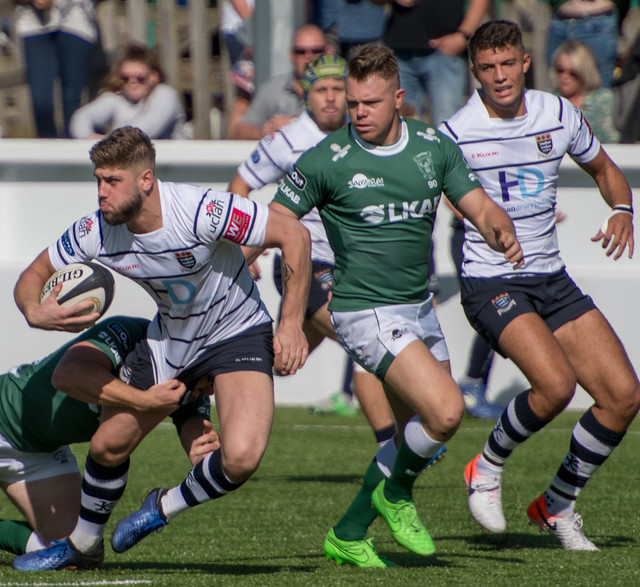