The much anticipated start to the season was finally with us and on a still, sunny and warm late summer afternoon the teams took to the field in front of what was a surprisingly small body of supporters.

Sedgley Park had finished third in the table last year and Hoppers had come second both times they met, albeit by a slender five points in the corresponding home fixture. So, with a confidence-building comeback win against Blackburn in the last warm-up game, everyone was looking forward to a good start to the season.

The Hoppers’ front row saw Tyler Sloane and Noah Miller either side of PJ as Oga is still working his way back to full fitness and Pete Altham is likely to be out for some time with damage to his shoulder from the Blackburn game.

Tigers kicked off and the ball was taken deep in the Hoppers’ half where the home side moved it quickly through several players back towards the half way line. The first of another afternoon of penalties halted the attack and Sedgley opted to go for goal. Collins’ kick was good and the visitors were three points up inside as many minutes.

Things did not improve when the Hoppers’ restart spiralled backwards and failed to achieve the required 10 metres. Play then moved on to the hosts’ 10m line and their lineout which was thrown long and lost at the back. Tigers were awarded another penalty a little closer to the posts than before and Collins made no mistake as he extended their lead to six points.

From the restart Hoppers gained a penalty of their own, fifteen metres into the Tigers’ half. Jake Squirrell stepped up and Hoppers were on the scoreboard with thirteen minutes played.

Matt Lamprey collected the restart kick and broke through to his own 10m line only for a knock-on in the tackle to halt his progress. Then a break by Jordan Dorrington, the first of several good runs he had in the match, took his side to the Sedgley line.

The Hoppers’ forwards then showed good control and patience, keeping possession through a long series of phases as the play moved from side to side in front of the posts.

Their work was rewarded when Sloane crossed the line and Squirrell converted to put the home side firmly in the lead.

The Tigers responded with a series of powerful attacks through the middle of the field which had the home forwards defending in their own half with Adam Howard in particular involved in some brutal collisions.

The players gained a breathing space when the Sedgley number 2 went down and play was stopped. But rather than a medical emergency, it appeared he merely needed to change his boots!

However, the Tigers did have a penalty which found touch on the Hoppers’ 5m line. From the lineout their hooker, Coe, whose new boots worked wonders for him, scored their first try which Collins converted and the lead was reversed.

Things did not improve for the home supporters when, in the ensuing five minutes, Alex Hurst was shown a yellow card and shortly after, Sedgley’s Metcalf crossed the whitewash. Although the conversion attempt failed, the visitors were now eight points in front with ten minutes of the half to play.

Hoppers in defensive mode are usually hard to break down and play became scrappy as they doggedly fought off the Tigers’ attacks. Play was halted when the referee decided he needed to have a chat with the captains after which the half staggered to a close with a trail of tedious penalties for both sides which failed to make real progress for either of them and left the score standing at 10 – 18.

The sides seemed to be fairly evenly matched with Hoppers pressing and defending well, their scrum holding and at times, unexpectedly driving the Sedgley pack with the forwards making good breaks throughout the half only to be thwarted by a knock-on or penalty.

Although the Tigers had been strong in their attack with fast running and swift handling it was just the two early penalty goals which had taken their lead from a slender two points to a two-score margin.

Arnie’s half time talk was a clear explanation of what was required – stick to the game plan and as Hoppers restarted the match it looked as though they had responded.

The ball was kicked deep into the Tigers’ half and cleared to the 10m line. Hoppers won their lineout and Hurst broke to the Sedgley line. The forwards were quickly up in support and with only a minute gone, Luke Proctor scored the hosts’ second try. Squirrell added the extras and Hoppers were back in the game with just one point separating the sides.

Then the supporters must have thought it was ‘Groundhog Day’ as, in a repeat of the first half action, another yellow card was brandished to the home side shortly after the try, this time to Sam Stott and having gained the points, Hoppers were again reduced to fourteen players.

Sedgley quickly took the advantage and in a rapid attack they moved the ball through several hands finishing with a try by winger Harrison. Again the conversion failed but again Hoppers found themselves two scores behind.

Play resumed and the Hoppers attack was stopped by a high tackle from the Tigers’ Goodman for which he was presented with a yellow card. Hoppers then made a series of attacks, one of which saw Tyler Spence break from half way and get to the opposition 5m line before he was bundled into touch.

Play moved back and forth in the Sedgley half and another break, this time by Scott Jordan was only stopped with another high tackle and a second yellow card  reducing the visitors to thirteen as Harper was sent to the sin bin.

Squirrell lined up the ball and had already turned away as it sailed over the posts, reducing the lead to just three points with less than a quarter of the match remaining.

With Stott back on the field Hoppers had a full complement and started to show some suggestion of taking control. They moved the ball with speed and handled it confidently. The pack were able to drive the Tigers at will in the scrum and despite a further flurry of penalties to both sides, they denied their visitors any further points until the old problem of poor decision-making under pressure raised its ugly head. With the ball in their possession and players making good runs against the defending side, on three occasions it was kicked, only to be lost and it was from the last of these that Sedgley were able to gather the ball and move up the field where their prop, Black, scored their bonus-point try in the last minute and Collins successfully converted to make the final score 20 – 30.

After the match the Tigers’ coach, Scott Barrow described it as ‘an arm-wrestle’, confrontational, with not much rugby played’

‘I am frustrated, we could have won. Credit to Sedgley, they capitalised on our mistakes but I’m disappointed not to have got anything from that match. At half time I told them to stick to the game plan but making some poor decisions late on cost us points.

I was apprehensive going into the match with our new front row but the scrum was good and we performed well in patches. The 9/10 pairing of Jake and Joe showed a good skill set and worked very well, Jordan Dorrington had a sound game at 15 and Adam put in a big shift today. Tyler stepped up and Joe organised his forwards well so there is potential there going forward.

Fylde will be a massive game next week and a good test for this young side.’

It certainly will so let’s get a good crowd down to Woodlands as we take on the first of the ‘old enemy’ games this year.

To see Mike Craig’s full gallery of pictures from the match, click on the photo below. 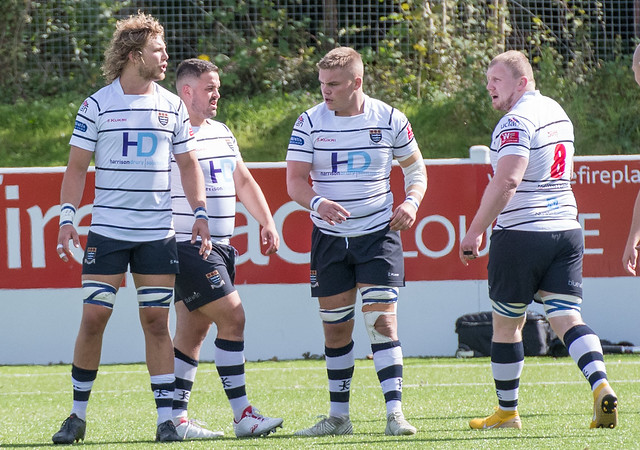