After two victories by the narrowest of margins last season, Hoppers’ supporters anticipated a really competitive game and they were not to be disappointed.

The teams took the field on another bright and warm late autumn afternoon which defied the forecasts of heavy rain and winds, at least for the early part of the match.

Hoppers had made some changes to the side that had beaten Scunthorpe. Ben Dorrington came in at scrum half after his impressive performance last week and Adam Howard returned after injury. Nick Gregson was unavailable due to contractual obligations and at the last minute, Matt Crow was taken ill, so Sam Stott started at twelve with Scott Jordan at eleven and Alex Hurst playing at thirteen. It was also good to see Oga Mabaya’s impressive run across the field to the dugout to take up duties assisting for the afternoon, we look forward to his full return.

Sheffield kicked off into the Hoppers’ 22. Ally Murray collected the ball which was swiftly moved on through some skilful handling to Hurst who then tore through the Tigers to their own 22 where a knock-on in the tackle curtailed the attack and from the scrum Sheffield were able to clear to the half way line.

But their respite was short lived as Tyler Spence then took the ball on his own 22 and raced up to the Tigers’ 10m line before being tackled.

Hoppers had made an impressive start but the Tigers settled into the game and started putting phases together. They moved down the pitch to their hosts’ 10m line and were awarded a penalty directly in front of the posts. Fortunately for the Hoppers supporters, Tigers’ Ireland had left his best kicking boots elsewhere as he made the first of three missed penalties for goal of the afternoon.

Only minutes later Murray was escorted off the pitch with an injury to his hand to be replaced by Sam Wallbank. He was taken to hospital for treatment and it wasn’t the best of days for the Murray family as he was quickly joined by his brother, Mark, who had been evacuated from the Second Team game with a damaged shoulder!

By now the Tigers had the upper hand and Hoppers were under a continual wave of attacks inside their own 22. The home side’s defence was effective as ever and they frustrated the Sheffield forwards time and again which resulted in the Tigers’ Symcox being shown a yellow card for foul play.

With only fourteen minutes of the match played there was plenty of time to make progress but Hoppers were unable to use the extra man advantage and when Symcox returned they had spent the entire period in their own half and the scoreboard remained untroubled.

It was not as if the game wasn’t entertaining. Play was fairly fast and furious at times as both sides mounted attacks with phases of possession that moved back and forth across the field and had their defenders working hard inside their own 22m lines. Hoppers were solid defending their own line but seemed unable to capitalize on winning the ball around the 22 as they were assailed by the Tigers’ attacks.

It was only in the twenty-ninth minute that the first points were scored as Ireland landed his first successful penalty kick, again from the Hoppers’10m line in front of the posts.

At this point the rain arrived and at times was torrential making the ball tricky to handle and causing problems for both sides.

From the restart Matt Lamprey broke from his own 22 to the Sheffield 10m line. Another knock-on allowed the Tigers to clear only for the Hoppers’ forwards to play the ball back inside the visitors’ half. Again the visitors played their way back to their hosts’ 22 and were awarded another penalty which the now confident Ireland slotted between the uprights to put them ahead 0 – 6 with seven minutes of the half left.

The home side were not daunted and they defended well to see the half out and head for the shelter of the changing rooms.

The sides had been evenly matched and although Hoppers were behind on the scoreboard they had had an equal amount of possession and the lineout for once was going well with Ryan Carlson rising high above the rest to win nearly every ball. Unfortunately they had, as yet, nothing to show from a lot of hard work.

Hoppers restarted the game and mounted a series of attacks into the Tigers’ 22 each of which were repelled with long clearance kicks back up the field. However, it was one of these which failed to make touch that allowed Hoppers to secure the ball and move down towards the Tigers’ line where the forwards went through several phases, moving steadily across the field towards the posts for Tyler Sloane to score just outside the upright. Hurst was on kicking duties and he made short work of the conversion to put Hoppers into the lead after just three minutes of the half had elapsed.

Play resumed the pattern of running exchanges up and down the field with penalties and scrums a plenty but neither side gaining real dominance until the Tigers were awarded a penalty on their hosts’ 15m line again in front of the posts and again Ireland’s boots did not let him down. Having been briefly in front Hoppers were now two points behind.

Only three minutes later Hoppers were reduced to fourteen when Spence was yellow carded and Sheffield had another penalty kick just inside the Hoppers’ 10m line.

This time the kick slid wide and with the ball as slippery as ever, play continued with the teams battling up and down the pitch desperately trying to put a series of handling moves together with little success.

Hoppers, as usual, were strong in the scrums and drove their opponents well. However, despite winning the ball and making good ground through fast running and passing, once again the decisions to kick forward lost them possession and also the precious metres they had made.

The home supporters were given hope when Hoppers were awarded a penalty on the Tigers’ 10m line. Ben Dorrington calmly stroked the ball over the bar to put the hosts back in the lead.

It was then somewhat appropriate that Noah Miller, having been replaced in the first half substitutions, returned to the pitch in the heaviest of the afternoon’s downpours and although his ark seemed to have floated away, he joined with the rest of the forwards to ensure that the team navigated themselves through the last eight minutes to secure the hard earned victory 10 –9.

It had been an entertaining match with both teams battling hard in atrocious conditions and the home supporters could be happy with their four points which moved their team up the table to fifth.

Arnie was pragmatic as ever,

‘A win’s a win and if you can play as badly as that and still come out with the points then it says a massive amount about the team. I think the early breaks made us feel over confident that we were going to walk this one but to be honest, the best side lost as we were only let off by some unusually poor kicking.

Once again we suffered from some poor decision-making in the latter part of the game, kicking the ball away when we had possession.

The try was well taken and credit goes to the lads for controlling the match once they had regained the lead.

We got out of jail and the team knows what they have to work on.

Next week, away at Wharfedale, will be as tough a game as we have had so far but with two wins under our belt we will go with confidence. This was a game that we would have lost last year and to come out with four points is good’.

The 1869 club is taking a coach to the match next week and supporters can sign up on the noticeboard in the clubhouse so let’s get behind the team once more and help them continue this winning streak.

As usual, click on the picture below to see Mike’s gallery of photos from the match. 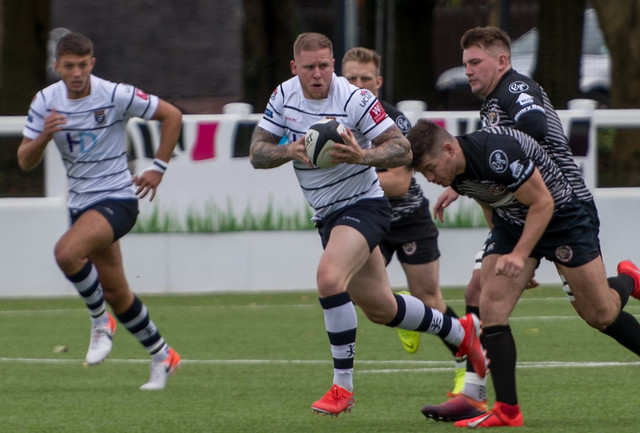