With Tynedale coming to Lightfoot Green on the back of inflicting defeat by the biggest margin this season in the first meeting, and now comfortably established in the middle of the league table, today’s game, although winnable, was never going to be easy and, given Hoppers’ present form, to claw a couple of points would be some reward.

The weather was as forecast, bitterly cold with a strong wind gusting across the pitch and, just for good measure, a crop of rain showers making the temperature even more miserable for the faithful supporters.

Hoppers did not start well. From their kick off the returning clearance was gathered and as they began to move forward a long, looping, pass from Tom Davidson was intercepted and Tynedale broke to their hosts’ 22 where only the tackle by Jordan Dorrington saved what seemed a certain try.

Whilst Hoppers had a penalty and opted to scrum inside their own 22, the ball was knocked on and possession given to Tynedale. This began a lengthy period of forwards play back and forth along the 22 with the Tynedale pack pressing the Hoppers’ line time and again.

Brief respite for Hoppers came from the referee who, having got himself in the way of play, gave the scrum to the attacking Tynedale side.

They attempted a drive but were held by the home defence and the phases across the try line resumed until Tynedale’s fly-half, Rodgers, collected the ball, ducked under a tackle and scored their first try.

With the kick fairly central to the posts, the conversion was easy and after six minutes hoppers were in their all too familiar position of being behind on the scoreboard.

Play settled into a fairly even contest with play moving back and forth in the middle third of the pitch until Davidson made a kick pass from his own 10m line which was collected by Ryan Carlson who then made good metres before executing a neat back hand offload only for the ball to be lost in the tackle.

Hoppers were then inside the Tynedale 10m line and gained a penalty which moved them down towards the 5m line where the ball went into touch and they had a lineout.

Time was stopped for a few minutes as Tynedale’s number eight was attended to but when play resumed Hoppers collected the ball and executed a powerful drive resulting in hooker Ollie Trippier, starting today in the wake of Chris Taylor’s injury last week, crossing the line just wide of the left hand post.

With the ball being steadied in the gusting wind Davidson levelled the score and at the end of the first quarter of the match the teams were back to all-square.

Play resumed and although Tynedale maintained pressure inside the Hoppers’ half, the home side’s backs made some telling breaks with link-up play from Sam Wallbank, Scott Jordan (playing at scrum-half today) and Jacob Browne switching the action from their own 22 to their opponents’ 10m line and, courtesy of a penalty, on to their 22.

Play was interrupted when the referee decided he had had enough of the backchat and Hoppers were given a warning.

Tynedale had a penalty which found touch on the Hoppers’ 5m line but the ball was stolen from the lineout and Ben Dorrington broke to his own 10m line where Hoppers were awarded a penalty and Tynedale’s Batey was shown a yellow card.

The kick found touch just short of the Tynedale 22 which then started a series of four Hoppers’ lineouts which were overthrown, lost long, stolen and lost long again and with less than a minute of the half remaining the almost inevitable try was scored by Tynedale’s tight-head prop, Haigh. Rodgers nailed the conversion and the teams went to the sheds with the scoreboard reading 7 – 14.

The game had been fairly even up to the last couple of minutes. Hoppers’, for once, had had good periods of possession but once again had received no reward. Kicks to touch had been generally successful although the lineout had not been functioning with confidence. The backs had had good opportunities and had made significant breaks to gain ground in the face of constant pressure by Tynedale and the forwards had had their usual strong defensive game holding and driving the Tynedale pack well.

However, they had not managed to take advantage of the yellow card and had suffered as a result.

Tynedale were strong in their attacks and looked dangerous in the Hoppers’ red zone with the result that, at the end of the half, their two visits to their hosts’ 5m line had resulted in the two tries.

The second half began with the usual tussles up and down the field with handling errors and missed passes resulting in scrappy play. However, Hoppers managed to put together some good phases only to be denied any reward once again.

Tynedale cleared their lines with a kick from inside their own 22 which headed towards the Hoppers’ 10m line. Browne leapt to knock it back in-field but somehow the ball skidded off his fingertips and continued a further fifteen metres, bouncing into touch inside the home 22.

The lineout was secured by Tynedale and scrum-half, Outson, darted over the line for their third try. The conversion was good and Tynedale were on the brink of taking the try bonus point.

Sadly, in a pattern that has repeated itself all too often this season, Hoppers, in possession and breaking to the Tynedale 22 opted to kick forward. The ball was collected by the Tynedale full back and shipped out to the left wing where number eleven, Pike, ran in having left all in his wake. The conversion from wide on the wing, failed but the bonus point was bagged and even with a quarter of the match left, the chances of Hoppers turning this one around looked slim.

Opportunity did present a chance when Tynedale were given another yellow card and prop Hughes was sent to the naughty step. But this was countered almost immediately by another, shown this time to Jordan Dorrington and the pain was piled higher when, from the penalty kick, Rodgers inched the visitors yet further ahead.

Hoppers did not give up and spent the last minutes of the match camped on the Tynedale line after a break started by Jordan from his own 22 took them into their opponents’ 5m line.

Play moved back and forth across the line until Ally Murray managed to steal the ball from broken play and dot down under the posts. Nick Gregson drop-kicked the conversion which was the final act of the tragedy and the teams trooped off with Tynedaled elated at the improvement of their position in the table and Hoppers staring the possibility of relegation full in the face.

Arnie was straightforward in his summary of the match,

‘Clarity and accuracy were all awry throughout the game. We lose five lineouts and they go on to score. They turned their possession into points and although we had plenty of possession of our own, nothing came of it.

It’s time for a clear-out. Some players are not showing the fight I expect from those wearing the Hoppers’ jersey and there are players who have played their last match for the team today.

In the second half heads dropped. Once again poor decisions cost us and little things became killers like Jacob trying his best to keep the ball in play but ending up with it fifteen metres further down the pitch!

We now need to regroup. My aim, if we do go down, is to bring the club back again and regardless of that, I am going to ‘blood’ new, home-grown lads, probably starting next week.

I know I keep saying that the injuries to key players this season has made it a hard job but losing has now become a habit and we must find some leadership on the pitch to allow us to make progress and that is what we will work on for the future.’

As the season drags on discussions about relegation are starting to be heard from the Hoppers’ faithful but, with that strange skill of irony that is so much part of the British psyche, the comments are more about being able to enjoy rugby in the fifth tier. Thankfully, for some, the glass is still half full…….!

Enjoy the 6 Nations and let’s see what next week brings with the away trip to Stourbridge. 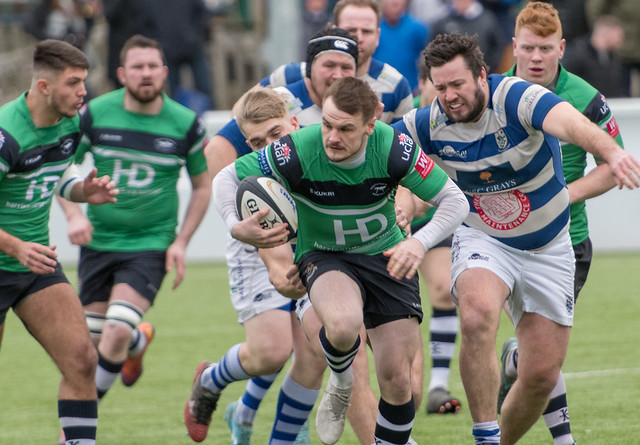