Sports coaches throughout the world are always seeking to find new ways of improving their team’s performance but watching the match from the rooftop instead of the dugout has to be up there with the quirkiest! Nevertheless, Arnie’s lads certainly put on a show.

In the cold and with a light breeze Leicester kicked off the afternoon’s entertainment and were quickly awarded a scrum on the Hoppers’ 18m line. The Lions started with a lively intent and were moving the ball with speed when it was intercepted by James Fitzpatrick who ran the length of the opposition half to dot down easily. Tom Davidson sent the conversion on its way, the upright for once helping as it glanced between the posts, and Hoppers were seven points up before the diners had reached the stand.

The Lions restarted but soon found themselves defending a lineout on their own 10m line. James Gough broke away and raced to their 22 to set up a series of phases across the field ending in a penalty to the home side. Davidson tee’d up the ball and with six minutes elapsed the score was a healthy 10-0.

From the restart the Lions gained a lineout on the Hoppers’ 10m line. Possession was lost and a pass to centre Teddy Leatherbarrow had him dancing his way through to the Leicester 10m line before he was tackled and a penalty awarded. Davidson stepped up again from a similar position to his previous kick but this time the ball slid past the right hand upright. The Lions breathed again.

Hoppers were in command and the forwards drove their visitors in the scrums and the mauls with apparent ease. With almost twenty minutes played the game was halted as, from one of these scrum-drives, prop Oga Mabaya was left on the ground in obvious pain. After several minutes of attention by the physio and the doctor he was stretchered off the field and moved to hospital with a suspected ruptured Achilles tendon. His place was taken by Noah Miller.

With thirty minutes of the game gone Leicester may have been thinking back to the previous fixture when they had been dominated by their visitors but managed to steal the game in the last minutes. Things seldom go to plan and from yet another lineout and drive Gough picked up the ball and his pass found Leatherbarrow who raced on to the line for a try just left of the post. Davidson’s conversion was good and the game restarted at 17-0.

The ball was secured by Hoppers and from his own 22 full back Nathan Pope broke away down to the Leicester 10m line. Some quick handling found Davidson out on the left side of the field who, with great awareness, saw Ryan Carlson lurking on the opposite wing and sent a beautifully weighted cross field kick which the number 5 caught in his stride and cross the line for the third try of the afternoon.

Davidson had no difficulty adding the two points and at half time, to the delight of the home fans, the score was 24-0.

Hoppers had dominated the match throughout the half, driving back the Leicester forwards at every opportunity and with our backs running through the visitors’ time and again it must have been a fairly concerned Leicester coach who made his way in for the half time discussion whilst Arnie climbed down from his eyrie to chat with the team about securing the win, five points and a nil score.

The second half started with a continuation of Hoppers’ attacking drives but Leicester managed to hold their defence despite spending long periods battling to secure their own try line. Frustrations came out in a couple of ‘handbag’ incidents and the referee called over the two captains to make it plain he was not going to tolerate this behaviour and things calmed down.

Play now moved towards the Preston 5m line as the Lions made a rare foray into their hosts’ territory. Through a series of phases they pressed the Hoppers’ line only to be repulsed at each attempt by a solid defence.

The match was paused again as another brutal passage of play left Matt Lamprey, Conor Truman and Lions’ number 5 Sumpter sprawled across the pitch and requiring attention. The hoppers’ lads recovered to carry on but the Leicester man had to be replaced.

The visitors continued to hold out against the Hoppers onslaught and the chance of a bonus point fourth try seemed to be slipping away. The spectators were being entertained but the home side’s dominance was now not so evident and it looked likely they would have to settle for the win when on seventy-eight minutes, yet another scrum and drive deep in the Lions’ 22 moved the ball out to Leatherbarrow who ran in his second try of the afternoon, securing the bonus point and sealing the win as, from the restart the ball was knocked on and the referee’s whistle signalled the end of the match.

It had been a confident display from the home team and although their visitors had come out in the second half with more determination, to secure a nil victory emphasised how Hoppers are able to beat good sides in this league. 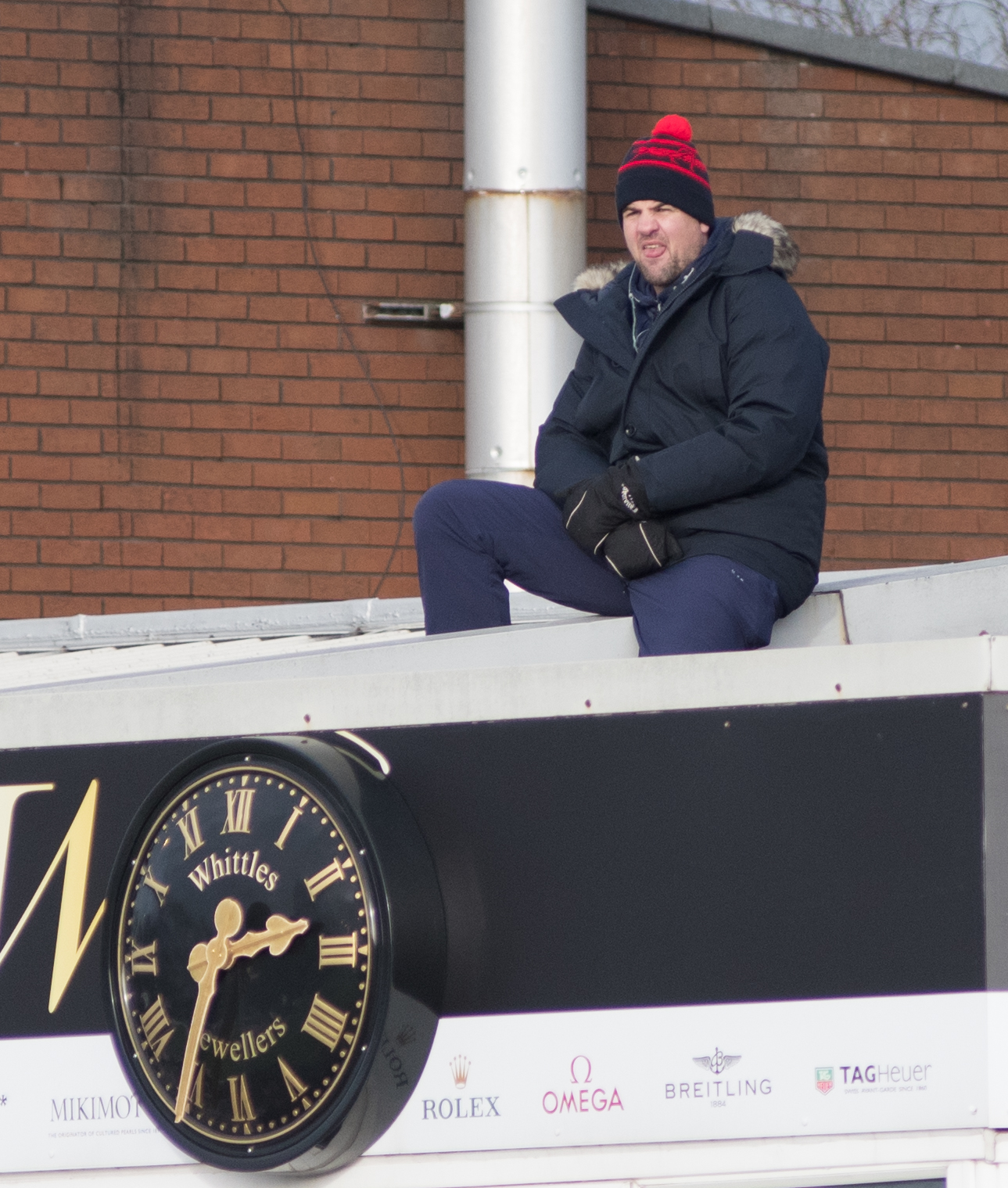 The ‘view from the roof’ was a very happy one.

‘This was one of the best controlled performances I have seen from the team. We only gave away nine penalties and stuck to the game plane which was not to play in our half. Clearances were consistently good but overall our defence won the match.

I said to them before the match I wanted five points and at half time I asked them for a five point, nil score and their performance delivered it.

The injury to Oga looks like a ruptured Achilles which would probably rule him out for the rest of the season but Noah came on and we continued to dominate the scrums and drives. Goughy and Davidson controlled the game so much better today and Teddy showed just what he can do with ball in hand.

Sheffield Tigers next week and Macclesfield the week after will be tough. There are no easy matches in this league and as we approach the remaining games it only gets harder. Our goal is to secure enough points to stay in the league and if we can do it in the next few games we can enjoy the run in to the end of the season.’

We now have two back-to-back away fixtures as a result of the re-arranged match against Macclesfield. Supporters’ coaches are arranged and with the team playing as they have done today, away support can only further help to deliver Arnie’s aim.