When things are not going your way sometimes it seems that more and more problems just mount up. As if the late injury in training to Will Davidson wasn’t enough, Jake Squirrell picked up a back strain in the warm up at Lockwood Park and took no further part in the fixture resulting in James Gough starting at scrum half and Arnie coming out of retirement and on to the bench for this all-important match against Huddersfield.

With both teams in the relegation zone points today were vital and so both sets of supporters were anticipating a good contest.

Conditions were cold and the pitch a little heavy despite the lack of rain in the week but with no wind any kicking was likely to be effective.

Huddersfield kicked off deep to the Hoppers’ 22 where Tom Davidson was able to get his first feel of the ball as he kicked to his own 10m line and a lineout to the home side.

The game had only been under way for one minute before an injury to the Huddersfield number 4 stopped the play and eventually he had to retire.

The Hoppers’ game plan quickly appeared to be one of testing the Huddersfield lineout. Their strong, heavy pack didn’t seem to relish the contest against the likes of Ryan Carlson and Ally Murray and their throws were often long and lost at the back. As a consequence Davidson’s choice to kick more often than of late was a good way of sapping the energy out of the Huddersfield forwards.

This proved a positive plan when after only five minutes he found yet another touch on the Huddersfield 5m line and from the lineout and resulting drive Chris Taylor scored just left of the upright.

Davidson had no difficulty in adding the extras and for a change Hoppers had opened the scoring in a very positive manner.

The home side were not rattled and six minutes later they too had a lineout five metres out from the Preston try line. They collected the ball and drove in wide of the posts. The conversion attempt by Will Milner failed and Hoppers returned to the restart with a slim lead.

The kick went deep into the Huddersfield 22 and was cleared towards the 10m line where it was collected by Davidson who then began a fast linking move with Scott Jordan and Jacob Browne which took play back to their hosts’ 22.

Huddersfield gained a penalty when a Hoppers’ forward was reluctant to let the ball go whilst on the ground but the kick didn’t make touch and was collected by Jordan who again, linking up with Browne broke towards the Huddersfield red zone and Hoppers were awarded a penalty. They won the ball and started to drive. The Huddersfield defence was working hard but with the referee playing advantage Gough had a free ball and although his kick pass towards the wing ran out Davidson had another chance to extend the lead with a penalty in front of the posts.

The kick was good and with the clock approaching the end of the first quarter of the match the score stood at 5 – 10.

Play settled down in the middle third of the pitch but Hoppers still pressurized the home side’s defence with carries by Taylor and another break by Jordan from his own 22 into the Huddersfield 10m area.

The clock was stopped again for an injury to Adam Howard and it was several minutes before he was patched up and ready to continue.

Huddersfield had a scrum inside the Hoppers’ 10m line and a break down the wing took all by surprise as they scored their second try to level the score and then take the lead as Milner kicked the conversion to put them in front.

Hoppers responded and quickly moved to their hosts’ 22. An attempted clearing kick was blocked by Nick Gregson as he ran forward which kept the pressure going.

A lineout to the home side was not straight but was collected by Carlson. The ball was moved out to the wing and Jordan Dorrington broke from his own 22 to the opposition 10m line.

Murray continued the move and some good handling across the line took Hoppers to the Huddersfield 5m line where Jordan Dorrington scored their second try wide on the wing.

Davidson’s kick floated wide and after a further couple of minutes the teams went in with the score at 12 – 15.

Hoppers had started well. They had gained and for once, maintained possession with the backs making good ground from quick handling and pace. Whilst the kicking game had not always been on target, the plan seemed to be working and although the Huddersfield attack was strong, the Hoppers’ defence had been equal to it.

Hoppers started the second half with long kick deep into the opposition 22. Then things began to change. Handling errors and kicks out of possession by Hoppers gifted the ball to Huddersfield and created constant pressure on the visitors.

A period of scrums and penalties resulted in the score being levelled again when Huddersfield kicked a penalty after eighteen minutes of back and forth play.

This was followed only minutes later by another successful penalty kick and to pile on the grief for the Hoppers, Murray was sent to the sin bin.

With Huddersfield in the ascendency another try was no surprise.

It came in the sixty-fifth minute when Hoppers, still defending with fourteen players were beaten by a little chip forward which was collected by number six, Bradley who crossed the whitewash under the posts. The conversion from in front was easy and Huddersfield were now comfortably in the driving seat.

The game then became fractious and it’s fair to say the referee was struggling to maintain control as bouts of handbags broke out, one of which resulted in Arnie being shown a yellow card after being on the pitch for less than four minutes!

More scuffles took place and play was sporadic until the final two minutes loomed and Hoppers had a penalty to pinch a losing bonus point.

The kick failed and the score remained 25 – 15 until the whistle ended the match.

Director of Rugby, Gareth Dyer pulled no punches after the game

‘We are just not learning how to play the game in the right way. Whilst not perfect, the first half went according to the game plan and we had success as a result.

Then, in the second half, a mix of poor individual decisions and an inability to think calmly under pressure meant that the game plan was forgotten. We moved away from what had been working and ended up losing the match.

We have a tough fixture next week against Tynedale and we are now staring down the barrel of a shotgun. It doesn’t matter who we play if the players don’t play as planned.’

With wins by all the teams directly above us in the league, the gap to securing our place for next season has now widened to fourteen points. With a possible total of fifty points available from the remaining fixtures, survival is not impossible and the support of the Preston faithful will help to spur the team on. So let’s get behind them again next week and hope they can start the difficult climb away from the foot of the table. 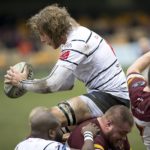 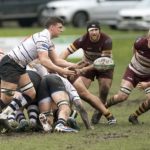 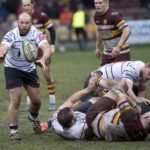 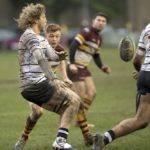 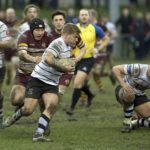 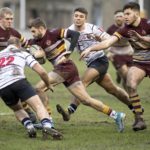 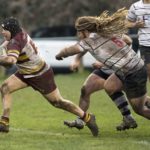