It was an early start on a cold but gloriously bright morning for both players and supporters as they gathered at the club to board the coaches for the long drive to Hereford and, with a three hour trip in front of them, the hearty Hoppers breakfast was a welcome start to the day.

Luctonians were only one place above Hoppers despite having a very similar points record in the table so today’s game was hugely important to both clubs.

Kick off was at 2.15pm and, having won the toss, Luctonians kicked off in pleasant conditions, the pitch a little greasy on top but thankfully on that open expanse with little shelter, there was not a breath of wind.

Hoppers collected the ball and to the delight of the travelling supporters began the first of many lengthy periods of possession in the match. The ball was passed quickly and effectively through many players and when Ben Dorrington popped a delicate kick forward towards the Luctonians’ 5m line for the chasing Tyler Spence, things looked very encouraging.

He was tackled short of the line and Luctonians had a lineout from which they kicked up the field.

Spence leapt to collect the ball but was tackled in the air and Hoppers were awarded a penalty which took them back the within fifteen metres of their hosts’ try line. They won the lineout and worked a series of passing moves only to be denied further progress by a penalty to the home side.

It failed to make touch and once again, Hoppers gained possession and set off down the field. The forwards moved quickly, passing the ball well and a slick pass from Ally Murray out of the back of his hand put Alex Hurst away on a break which continued with another deft pass to the supporting James Gough to make further ground into the Luctonians 22, where only an interception of his pass reversed the attack and put the home side into their visitors’ half.

They gained another penalty and from the lineout on the Hoppers’ 22, a grubber kick broke the defence. The ball was knocked forward in a tackle and Luctonians had a scrum on the Hoppers’ 5m line and with ten minutes of the game played, despite having had the majority of the possession, Hoppers were seven points down when winger, Robinson-Hall crossed the line and scrum half, Silver converted.

In the scramble to defend the try Ryan Carlson suffered a blow to the face and having been attended to on the field, was led off with blood streaming from his nose to take no further part in the match, his place being taken by Luke Proctor.

Hoppers restarted and were immediately on the attack with a forwards’ break started by Matt Lamprey, who moved the ball on to Christian Taylor and then to Proctor. A chip forward looked useful until the bounce took it dead and Luctonians had a welcome breather and a drop out from their own 22.

This proved to be only a brief respite as the Preston forwards collected the ball and set off on a lengthy series of phases which took them into the Luctonians’ 22 where they spent the next twelve minutes piling pressure on their hosts’ defence.

With play moving back and forth in the home side’s half and crunching tackles being made by both teams, play was halted after a brief dispute between Murray and Luctonians’ Harriott- Davis resulted in both of them receiving a yellow card to sit on the naughty step for ten minutes.

When play resumed hoppers continued to press the opposition 22 and after their scrum had to be reset a second time they were awarded a penalty almost in front of the posts.

Hurst tee’d the ball and confidently kicked the three points to put Hoppers on the scoreboard which after twenty-two minutes read 10 – 3.

However, this was quickly redressed only two minutes later when Luctonians, finding themselves in the Hoppers’ ‘red zone’ were awarded a penalty directly in front and only fifteen metres out. Silver had no problem with the kick and the seven point lead was restored.

Now it was the home side’s turn to exert sustained pressure inside their opponents’ half and from their lineout just outside the Hoppers’ 22, full back Morris broke through to score in the corner. This time Silver’s kick failed to make the target and the score moved on to 15 – 3.

Again, Hoppers pressed forward and spent the rest of the half in Luctonians’ territory. A break by Proctor took them towards the 5m line and a scrum. The forwards drove for the line and only some brave counter-rucking enabled the home side to clear the danger.

Hoppers secured the ball and then went through a long series of phases across the try line resulting in a penalty on the 22 just left of the upright.

Hurst stepped up again but to the dismay of the supporters, what looked like a certain three-point kick sailed wide of the post and the score at half time remained 15 – 3.

Hoppers had had nearly all the possession in the first half, moving the ball well and, at times, with speed. They had pressurized the Luctonians’ line time and again with no reward. Their handling had not been as erratic as of late but so often the passes had been static and had given time for the home side to group their defence and deal with any threat.

As has been the case in so many matches this season, the opposition had turned their possession into points and small errors by their visitors had given them two tries in the face of constant pressure deep in their own half.

The second half continued the pattern of the first. Hoppers secured possession and pushed on to the Luctonians’ 10m line where Spence made a break up the wing and put a good kick-pass towards the post. Scott Jordan was racing through to receive it but the bounce took it high over his head as he over ran it.

Hoppers’ forwards mounted yet another long set of phases of pick-and-go moving back and forth across their hosts’ 5m line for what seemed an eternity. But again when the ball was eventually cleared once again they had nothing to show for their efforts.

The score remained unchanged for almost fifteen minutes until a try by Luctonians’ winger, Crowley, converted by Silver, stretched the lead to nineteen points and put the home side within touching distance of a Bonus Point.

This boosted the Luctonians’ players and they now made a series of attacks, breaking tackles and gaining ground. The Hoppers’ defence held them out until, on sixty-one minutes, hooker Kirkby  scored the fourth try. Silver’s conversion was good and the Bonus Point was in the bag.

The last ten minutes played out as had most of the match with Hoppers attacking to the last. With the win almost a certainty, the home side gained possession and denied their visitors any further chance to score and when the final whistle was blown they took the Bonus Point win and the full five points.

When Arnie sat down for the post-match summary it was some time before he could summon the words,

‘We had probably 80% of the possession in the first half and after pressurizing them on their own line for a good ten minutes, a couple of errors had them scoring a try.

Losing Ryan early was a blow but Luke, as ever, stepped in.

We maintained pressure and our carrying and passing took us over the gain line again and again but we couldn’t capitalize on it.

Luctonians are a decent side and they have picked up Losing Bonus Points which has put them ahead of us.

We need to regroup for next week’s match against Hull who are doing quite well so far. This league is stronger than last season and whilst there have never been many easy matches, teams have to fight for every point.’

The lads were very down after the match but they do appreciate the continued support they get both home and away. Next Saturday is another day and fortunes must turn round sooner or later. Today’s outing showed some promise but without reward. If the team can keep improving and turn the pressure and possession into points then we could see a replay of last season when, in the second half of the programme, they came back from the foot of the table to finish seventh 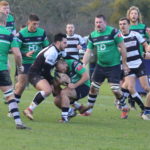 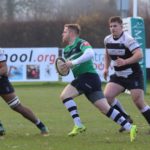 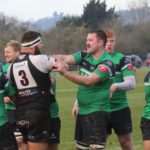 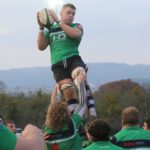 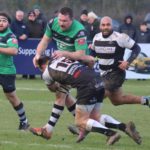 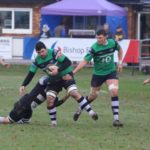 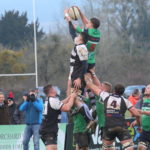 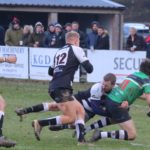