Hoppers travelled to Cheshire for their last league game of the season, to face bottom of the table Northwich, secure in the knowledge that they were already promoted to the National League.

Conditions were bright and warm in the sunshine, although the cool wind, whipping up a dust storm from the car park, made the spectators glad of a warm coat.

Northwich started well and had much of the possession in the first ten minutes as they battled into the Grasshoppers’ 22 only to be denied a score by the solid defence which has been a cornerstone of this season’s success.

There was also a setback for the visitors when, after only ten minutes, a very dazed Jacob Browne had to be led off the field due to a blow to the head. He was replaced by Mark Murray who came on for his 100th appearance in a Hoppers’ jersey.

When the visitors finally secured the ball the tide turned and having gained a lineout on their hosts’ 5m line, Hoppers attacked the try line and were awarded a penalty. They opted to scrum and Matt Lamprey performed his trademark peel from the base to score the first points. With a tricky wind behind him Ben Pearson sent the ball goalwards where it hit the upright and was fortunately deflected between the posts.

Shortly after the restart a scuffle broke out and a red card shown to Northwich’s Williams, who had travelled several very obvious metres to join in and swing a few punches, then opened the floodgates.

From a driven scrum on the Northwich 5m line, Oli Trippier broke through and Pearson converted. His effort was then added to by Tyler Spence who found himself on the end of a very fast passing play through several hands, leaving him a sprint in from the Northwich 22. Again, Pearson was on target, and the score moved on to 0 – 21.

The Bonus Point was collected on the half hour mark when Jordan Dorrington blazed his way through the defence to score mid-way between the corner flag and the post. Pearson added the extras to keep the score board moving, 0 – 28.

The fifth try was not long in coming when Lamprey made a break from his own 10m line on towards the Northwich 22. Hoppers were given a scrum on their hosts’ 10m line and this time the trademark peel from Lamprey had the added spice of a forty metre break to score his second try of the match. Sadly, the wind failed Pearson as his kick drifted just wide of the upright, 0 – 33.

With less than five minutes of the half remaining, a clearance kick from Pearson took his side from their own 5m line to that of their opposition where Rob Bramhall crossed to score the sixth try and Pearson had no difficulty from in front of the goal to make the score at the whistle a healthy 0 – 40.

The second half brought continuing misery to the Northwich faithful. The clock had only ticked off three minutes when Dorrington broke from the half way line all the way to the Northwich line and with no one between him and another score, he selflessly passed to the supporting Mark Murray for him to score in his centurian game. Pearson defied the wind to add the two and with seven tries in the bag, Hoppers led 0 – 47.

Dorrington repeated this feat just four minutes later and this time it was Harrison Moulding who was given the final pass to score his try, although Pearson’s kick was blown wide, 0 – 52.

Then a real ray of light shone into the Northwich gloom. As Hoppers mounted yet another onslaught on their hosts’ 5m line the Northwich fullback, Naylor, intercepted a pass and then showed a real turn of speed which took him past the opposition, all the way to the Hoppers’ 22. A try looked a certainty until, in an apparent rush of blood to the head, he decided to kick on and the ball was lost forward, much to the relief of the sprinting Hoppers’ defenders.

Immediately the visitors turned a desperate defence into attack as Dorrington set of again, making his longest break as he raced through the field, dodging tackles and stepping the opposition on his way to yet another open goal. This time though, it was his turn to score, much to the delight of the travelling fans. The conversion again succumbed to the strong wind but Hoppers’ lead moved on, 0 – 57.

Two minutes later Dorrington crossed again and Pearson, opting for the drop kick, made sure of the extras, 0 – 64.

Northwich were not to go away empty-handed though. They managed to battle their way towards the Hoppers’ 22 and were awarded a penalty in front of the posts. With the wind behind him, winger Husbands confidently slotted the kick, relieving the embarrassment of a second nil loss to the Preston side and making the score 3 – 64.

Despite the three points gained by their hosts, Hoppers’ now had full control of the game and were driving the opposition at will. Lamprey added to his tally with another pair of tries and the game was rounded off with a solo effort by Declan Norrington to make the final score, 3 – 81.

There were several landmarks in this match. Along with Mark Murray, Matt Lamprey notched up his 100th appearance and Toby Harrison achieved his 50th. It was also the final League match in charge for Head Coach Paul Arnold who was quick to praise the achievements of his squad this season:

‘I am really proud of the way they have performed today. They played some really nice stuff, they were clinical and ruthless, which is the best way to show respect to a team who have had a very hard year. Throughout the season the team have done all that I have asked of them and I am really happy to be finishing the League with another dominant victory. With promotion in the bag we now have the Lancashire Cup final to look forward to.’

So, we now look forward to revisiting old friends across the north of England as we move back into the National League. Next season offers some interesting changes, not least the prospect of a new coaching team and new targets to aim for. The squad has had fantastic support at all the matches and long may that remain! Thank you all for continuing to read my meanderings through the games this season Have an excellent summer and let’s look forward to another successful year. 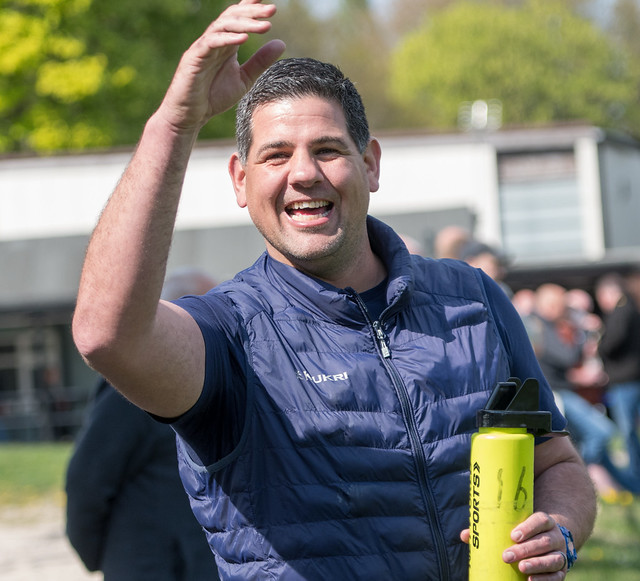