With the late diagnosis of Covid for Arnie, Byron on his way back from playing in Italy with the Sharks, and Craig unavailable, it was a much reduced coaching staff who took to the bench at Cross Green.

With DoR Gareth Dyer in charge and Ian McFarlane in support, the team took to the field on a pleasantly warm if cloudy afternoon with only a light breeze ruffling the trees surrounding this old ground, which may be hosting its last season of rugby as Otley begin the work to build a new facility just down the road.

From the off Otley stamped their mark on the game and within five minutes were three points up from a penalty 15m inside the Hoppers’ half, number 10, Callum Irvine scoring the first of his twelve points for the match.

It was just four minutes later when full-back Ben Magee scored the first try, darting out from a forward press to touch down just left of the posts. Irvine added the extras and once again the travelling faithful were faced with their side being ten points down before they had had time to settle into their seats.

It’s easy to say, ‘Nothing went right’ but the truth is it appeared that good fortune had deserted our lads. A useful grubber kick from Ben Pearson would have made a significant advance but for it bouncing conveniently into the opposition’s hands. Clearing kicks from Hoppers players missed touch and the deft recycling of the ball we saw last week was nowhere in evidence.

Otley were fast on the attack, pouncing on every opportunity and moving forward with power and speed so it was just as the first quarter of the match had elapsed that they scored their second try. Moving the ball through fast hands, they had winger Marcus Law running in under the posts which, after Irvine’s conversion, took the score to 17 – 0.

The spectators were then treated to a bout of ‘kick-tennis’ as the ball went back and forth five or six times before play could resume. Hoppers defended well and at half time the tally was unchanged and the teams went in at 17 – 0.

Last week’s convincing start was a good opener for the team after such a long layoff from competitive rugby but everyone involved with the club knew that it wasn’t a realistic representation of what the team was going to be faced with in the coming season. Perhaps that easy start had introduced an element of misplaced confidence? Whatever the reason, Hoppers had been out gunned in the first half with only their tireless defence preventing more points being scored.

The fast start had not allowed them to settle, and throughout the half Hoppers were defending all over the pitch. Despite many strong individual efforts, they were unable to break through to their hosts’ line.

Otley were well organised in attack, passing quickly and accurately and repeatedly gaining ground in the face of dour defence by their visitors.

Hoppers were unable to break out and with the penalty count beginning to stack up our forwards were finding the Otley pack a tough match.

The second half started quietly from a scoring point of view but with just under fifteen minutes gone Otley had a line-out on the Hoppers’ 5m line from where flanker, Sam Waddington, went over for the third try. This time the conversion failed but the score moved on to 22 – 0.

When Otley took the ball from a scrum on their own 15m line and broke away up the field with a passing move that put Irvine in under the posts, it looked as though Hoppers might be facing a ‘nilling’. The conversion was made by scrum half Joe Rowntree and with only twenty minutes left, Hoppers were facing a score of 29 – 0.

There was a glimmer of hope when, from a line-out on the Otley 10m line, the forwards broke through and Matt Lamprey fought his way over only for the ball to be held up.

Play then resumed as before with the forwards still battling up and down the field until, in the seventy-third minute play was stopped for a short while owing to an injury to Otley’s Irvine who eventually left the field nursing his arm.

From the scrum restart inside the Otley half, it was Jacob Browne who took the ball and, jinking his way through several tackles, he ran in a try in the corner.

Jake Squirrel had his first attempt at goal from wide out on the wing but the ball sailed past the upright and when the final whistle blew the score was 29 – 5.

Gareth spoke to me after the match:

‘No complaints, they were the better team throughout. They came out of the blocks quicker than we did and imposed themselves on the game though we allowed them to do that a little bit.

There were some positives, at times we did start to do the things that we wanted to do but we were inaccurate. We coughed the ball up too much and also the penalties racked up against us which helped what was a very good team to dominate the game.’

I suppose this was expected to be the toughest fixture on the list this season?

‘Yes, they look powerful, well-drilled, and with players who have been there and done it before so, on that basis, they are a very good team, I just think we could have been a lot more accurate in what we were doing and made it a lot closer on the scoreboard in terms of chances we created. When the game was in the balance we didn’t finish. We could argue about the try in the corner as to whether it was in touch or not but we’ve got to be good enough to take those and we weren’t today. Maybe it’s a bit of a wake-up call for us to see where we are actually at.’

We move on next week to take on York who, after two matches, sit seventh in the league, so get down to the club and give our lads all the support you can to get them back on track. 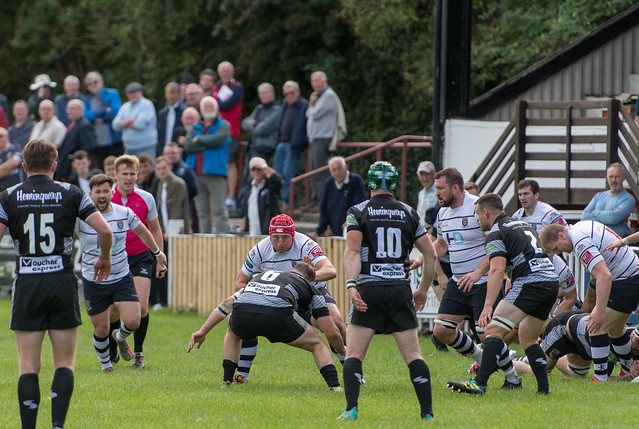