Hoppers snapped a run of three consecutive defeats with a convincing home win against Harrogate.

After putting in impressive displays in the last two games against sides in the top three, and recording losing bonus points, Hoppers used the positive momentum to record their second home win over a top 6 side.

The only downside was the inability to record the bonus point for a fourth try after three scores in the first half had opened up an unassailable gap for Harrogate who looked unable to breakdown Hoppers stifling defence and had to settle for two catch and drive tries.

Speaking after the game Hoppers head coach Garth Dew said; “It wasn’t pretty but that’s a really good four points, we dominated them defensively and scored some nice tries. We killed the game off and showed maturity, the way we defended was very pleasing and was something I have been looking to build on all season.”

“I was surprised by some of the handling, as we could have scored more, because we had trained well but we didn’t really develop a pattern and go through phases in the second half.”
“You’d back Harrogate to score tries against anyone so it’s a real positive that we have handled them really well in open play. Our defence is something that’s really improved, we had a tendency to fly out of the line but the lads have really taken on board the way we want to play and the importance of keeping your composure and trusting your teammates.”

“Individually I thought Ally Murray had a big game, a lot of the pack went well and it was a strong team performance but being able to play him at 6 gives him the confidence to get around the park and impose himself. The back three played well, good to have Phil Baines back and he had a good game and John O’Donnell and Scott Jordan have slotted in really well since joining the club.”
In great conditions for rugby Hoppers survived an early assault from Harrogate before scoring the opening try through Andy Napier. Phil Baines was beaten to a kick through in goal after Harrogate spilt the ball in midfield but Hoppers launched an instinctive counter attack from the 22 drop-out. Jordan fielded the ball and made good ground and fed Murray on a great support line who powered through the defence before offloading well to Napier.

Harrogate enjoyed a lot of possession but didn’t look like scoring until Hoppers handed them an opportunity deep in the 22 from which Kerry Wood scored at the base of a 5m catch and drive. This served as a wakeup call to Hoppers who scored from a line-out of their own after defensive confusion gave Murray space to smash his way across the line. As time expired in the half Hoppers were awarded a penalty try as Harrogate pulled down a maul on the line after a turn-over and a superb Lewis Allen kick set up a line-out 5m out. Allen converted all three tries to give Hoppers a 21-5 half time lead.

Both teams made numerous mistakes in the second half resulting in a very stop start game that neither team were able to control. Hoppers had a couple of opportunities but poor handling and odd officiating meant they couldn’t improve on their first half haul and it was Gate who scored the only points when they were awarded a penalty try in similar circumstances to Hoppers.

Dew is positive Hoppers can end the season on a high, saying; “While we are still looking over our shoulders we are growing in confidence especially as the ground hardens. I really believe we have a massive result in us when we are going to put 40+ points on someone and it’s going to happen soon. There is no reason why we can’t win all of our remaining games.” 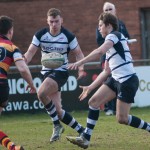 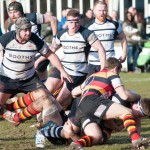 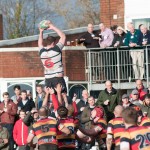 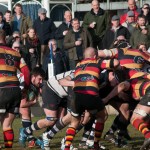 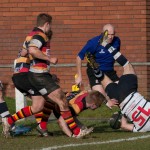 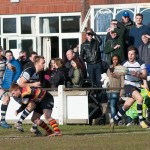 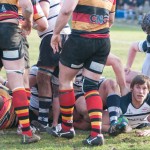 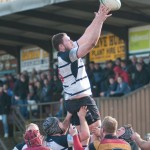 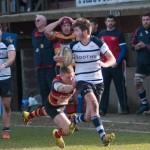 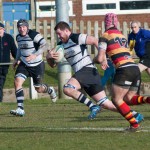 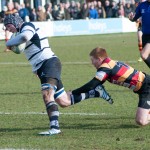 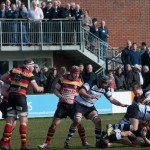 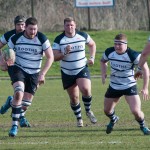 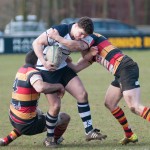 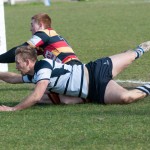