Hoppers ended a run of three straight defeats and went a long way to erasing the memory of last week’s disappointing performance with a comprehensive 45-14 victory against Leicester Lions.

The club was celebrating its 145th birthday and the action on the pitch and Hoppers put in an all-round performance to match the days celebrations as they ran in five tries scored by forwards and backs with a mixture of strength and guile and dominated their opponents who struggled to get into the game.

A powerful display by the forwards, epitomised by a superb scrummaging performance that saw the pack push Leicester off their own ball and cause a multitude of turnovers was well supported by a slick back line and a smothering defensive effort.

Head coach Garth Dew was delighted with the performance saying; “It’s a special day for the club and the guys fed off the big crowd and the fact that so many past players were here to celebrate and cheer them on.” “I’m over the moon, we’ve had a difficult time this week but this is a massive performance that builds on the way we played at Sedgley. We wiped the floor with them today and made Leicester look average and I’m really chuffed for the guys.”

“The set piece was a real positive, I thought the front row was outstanding and it’s great to be able to bring guys off the bench who keep the momentum going. We did a great job in playing the situation and trusted the game plan and each other.” “I thought Matt Gargett had a great game, he quietly goes about his business but is a good player, Sam Russell came in and played well especially his defensive work and Chris Taylor was outstanding yet again.”

This was a superb performance but it didn’t get off to the greatest start as Leicester scored in the opening minutes as a couple of penalties gave them a line-out deep in the 22 allowing Rob Young to cross untouched. However this appeared to be the kick start Hoppers needed as they dominated territory and possession for the rest of the game.

Lewis Allen slotted a penalty before Matt Gargett rounded off a superb move with a quality finish. The lead was extended when John Embelton powered over after an interception and a quick tap penalty at the visiting defence scrambling around and with Allen’s second penalty Hoppers took a 20-7 lead into the break. The second forty couldn’t have got off to a better start as Leicester allowed an Embelton kick to bounce and the full back recovered with some great hands before Phil Mills and Andy Napier combined to put Pete Altham in the clear who threw a superb dummy to canter clear under the posts.

Two more Allen penalties put the result beyond doubt and things got worse for Leicester as they were reduced to 14, when Oliver Taylor paid the price for a mounting penalty count. Hoppers secured the try bonus point on the hour mark when Chris Taylor picked up from the base of another powerful scrum before running over the fullback. Leicester showed a bit of spirit to score a well taken try when Nathan Donnachie sliced his way through the line after Hoppers rung the changes but it was a replacement who had the final say as Tom Hurst finished off a brilliant team try with forwards and backs combining well to end the game in style.

The photos below are provided with the kind permission of Mike Craig. 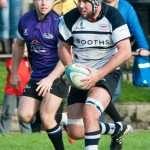 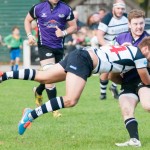 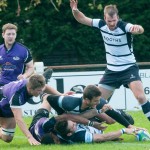 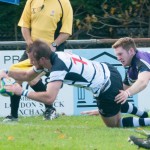 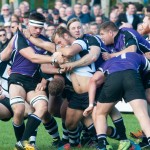 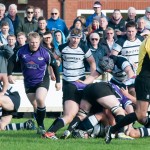 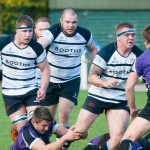 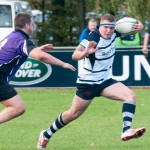 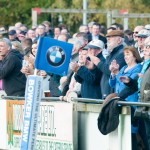 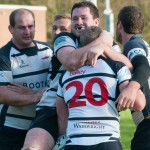 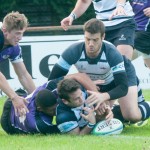 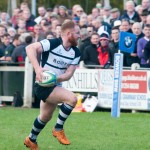 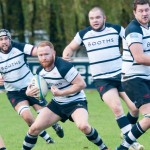 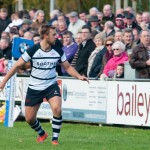 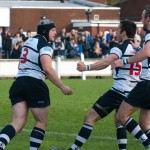 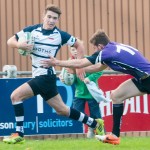 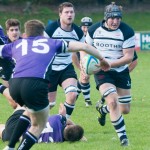 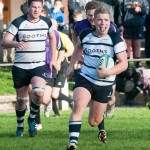 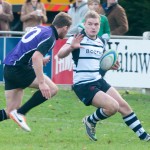 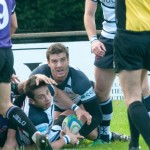 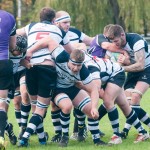 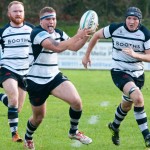 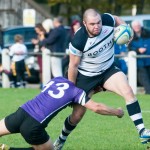 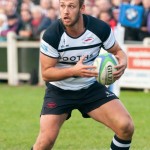