Hoppers again failed to win at home as a solid second half performance gave Otley a hard fought win at Lightfoot Green.

With a heavy pitch and rain showers throughout neither side was able to sustain much free flowing rugby with numerous knock-ons and passes not going to hand. As the weather worsened and the rain came Otley’s pack took control with a solid set piece coupled with an intelligent half back pairing who worked the ball well into the corners.

Speaking after the game a dejected head coach Garth Dew said; “We have given them the hair dryer treatment after that one as what else can the coaching staff do better to prepare a team only for individual errors and silly penalties cost us.”

“We had a game plan of how to play in poor conditions, to play in the right areas, build pressure and not to concede cheap penalties and in the first half we did that, it wasn’t pretty but we went in in front. Then in the second we have a penalty for a late hit, a yellow card for a dump tackle and are marched back 10 yards for back chat.”

“There’s a lack of leadership and intelligence that could get us into trouble, this is National League rugby not school or college, we spoke about these four games after the week off being crucial and needing to win three so it’s an uphill battle starting next week at Luctonians.”

“There were some positives to take from the game, in particular Luke Proctor and John Mackenzie who were outstanding and in tough conditions the scrum did well against a big pack.”

In a scrappy first half the only points came from the boot of Sean Taylor after Otley were offside at a ruck. Both sides tried to run the ball and keep it off the deck but the slippery conditions made it tough and at times a kicking dual was needed. The two pairs of half backs were getting great distance on clearing kicks with both sides looking to kick to the corners or put up high balls to test the back three but neither side created a clear cut chance. The visitors had a couple of attempts from the kicking tee but Stephen Depledge was off target.

The game turned early in the second half with one real moment of class as Gareth Newman scored a stunning 50m try to give the visitors the lead, Depledge found his kicking boots to land the conversion and extended the lead with a nice penalty.

Hoppers then went into self-destruct mode as replacement Olly Yates was sin binned for a dangerous tackle moments after coming on and Otley kicked to the corner and launched a catch and drive with Declan Dunn touching down, again Depledge converted well.

In the final minutes Hoppers tried to get something from the game and got themselves deep into Otley territory but again poor handling and ill-discipline let them down.

The photographs below are provided with the kind permission of Mike Craig. 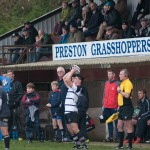 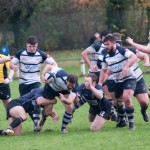 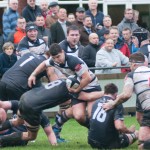 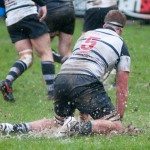 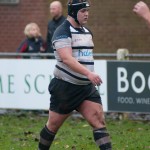 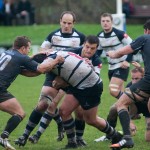 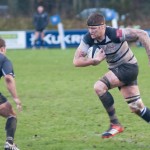 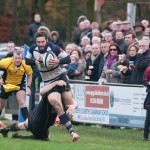 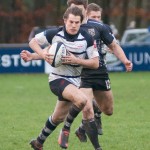