Hoppers registered their first win in their opening home game with a 25-14 victory over newly promoted Sale FC.

Reflecting on the game Head Coach Garth Dew said; “we’ll take the win but in truth it was a bit scrappy and an ugly win, the breakdown was a mess and it never really got going.”

“We spoke at half time about game management but we were unlucky that an early injury to Sam Kindred meant Scott Jordan moving from wing to scrum half for most of the game, but he did a decent job.”

“Our set piece improved and when Christian Taylor came on he didn’t miss a line-out but we never really got enough quality ball to the likes of Hough, Taylor and Olly Viney who looked dangerous in possession.”

“I thought we defended diligently although we did slip off a few tackles, the only time they really looked like scoring was through the driving maul.”

“Mark Murray controlled the game reasonably well at 10 and defended well, John Mackenzie learnt some lessons from last week and is very encouraging for an 18 year old and I thought Oga Mabaya was outstanding, he’s worked really hard to make the step up from the seconds and is reaping the rewards.”

Hoppers started brightly and were soon in the lead when Hough took a short pass from Murray to go in untouched by the posts following a nice 5m line-out. Sale really got on the front foot as Hoppers couldn’t clear their lines from the restart and Keep touched down a driving maul to reduce the gap to 7-5.

Both kickers then added two penalties before the break as chances were few and far between in a half frequently punctuated by the referees whistle.

In the second half Hoppers twice had a penalty reversed as the officials were putting their marker down on the game that again struggled to find any flow and rhythm.

It took a moment of magic to get the tempo going as a Murray cross field kick was well taken by Hough whose quick pass allowed Taylor and Sam Russell to combine to put the full back over in the corner.

McGovan added a penalty to make it 18-14 and ensure a nervy final ten minutes for the home support but Sale were guilty of not taking their chances as twice they got behind the Hoppers defence only for poor decision making and some excellent scramble defence to stop them short of the line when more accurate passes and better patience could have lead to score.

Hoppers sealed the game when Billy Woof pounced on a loose ball following a Hoppers scrum deep in the 22 and powered his way through the defence before offloading to Sam Gale who was in good support for the try which Taylor converted.

Thank you to Mike Craig for allowing us to use his excellent photographs which you can see below. 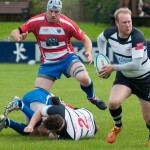 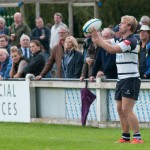 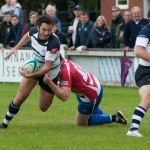 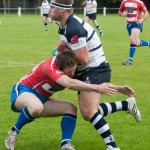 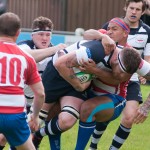 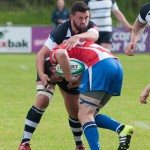 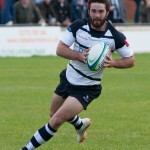 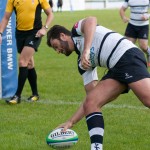 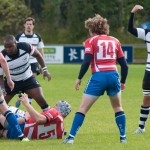 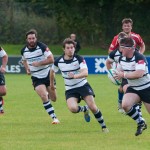 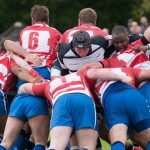 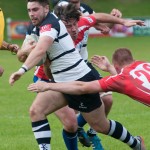 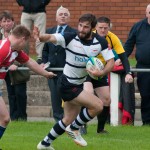 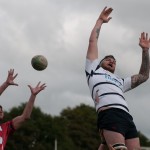 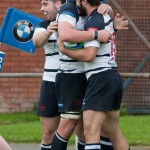 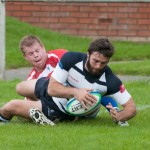 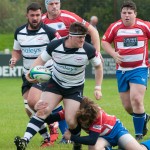 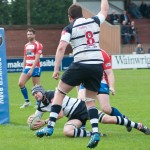