Hoppers flattered to deceive by starting strongly as Jacob Browne touched down in the third minute after some strong forward pressure and Tom Walker converted. But the lead was to be short-lived as, virtually from the restart, Jordan Dorrington saw yellow for a high tackle and Alnwick took full advantage, a line out drive producing a try for hooker James Cowan and fly-half Evan Moir tied the scores from the tee.

Hoppers, backed by a strong wind, enjoyed some field position but were unable to break through a stubborn defence and, ironically, when restored to a full fifteen, it was the visitors who took the lead. A break by the backs led to a forward drive and scrum half Hugh Todd spotted a gap to run in from close range and Moir’s kick made the score 7-14.

As conditions deteriorated, Hoppers used a clear advantage in the tight to gain possession and territory but again were unable to turn pressure into points although still in the hunt at the break.

The second period was almost a one-man show as the visiting No.10, the immaculate Moir, took the game by the scruff of the neck using his wind-assisted kicking skills to gain field position and keep the score board ticking over with a succession of 5 penalties and a drop goal as Hoppers continued to infringe within his range.

Hoppers had the edge throughout in the scrums but No.8, Ben Gothorp tidied up at the base to limit the advantage and Hoppers’ incursions into the opposition 22 inevitably broke down with occasional careless handling.

The game was perhaps summed up when, in the dying seconds, Alnwick were forced to touch down in their own in goal area, but Moir’s goal-line drop out found touch on Hoppers’ 10 metre line and the final whistle and score of 7 – 32 brought the home league unbeaten run to a shuddering halt.

A disappointed coach Paul Arnold reflected: ‘They wanted it far more than us, played the conditions better and our game management was poor. We scrummaged well but were well beaten at the breakdown and need to sort things out with some difficult games coming up.’ 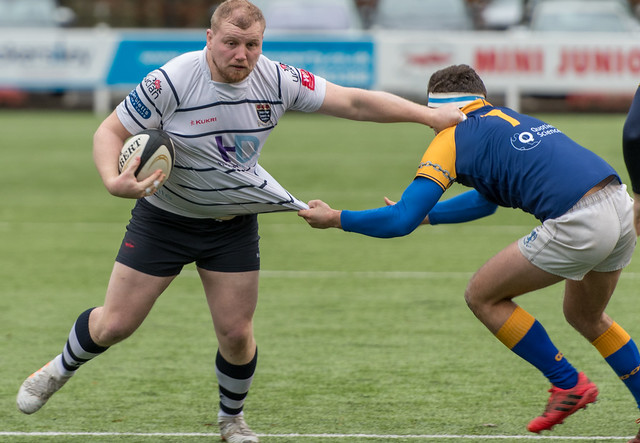