After a week without First Team rugby, today’s game was eagerly anticipated and also enhanced by a two-day visit from the CEO of the RFU, Bill Sweeney, who was with us to see how the Club operated in the community, spend time with the Mini and Junior section, open the newly refurbished 1869 bar and hold a question and answer session at the pre-match lunch.

Having watched the match, he spent time mixing with members and players in the usual post-match discussions about what turned to be another good win for Hoppers.

Conditions were good for running rugby. Whilst the sky was overcast, it was bright and there was no wind to worry the kickers.

Billingham kicked off and started well. Their forwards were a big unit and set out to dominate the play. Hoppers however, had the early possession, and a break by Matt Lamprey and a tapped penalty by Jake Squirrell saw the home side in the Billingham Red Zone and pressing the try line.

The referee halted play to speak to the captains after he realised that this was to be a somewhat feisty game and the teams were duly spoken to.

The visitors restarted play with a scrum on their own 5m line where the ball was taken by their full back who then raced to half way. Hoppers were awarded a penalty which took them back to their opponents’ 15m line but the line-out was not straight and Billingham had the scrum.

Their forwards then unleashed a fast passing play which took them up to the Hoppers’ 22 where the ball was secured by the home side. It was picked up by Tyler Spence who had been promoted from the bench when Jacob Browne was struck down with Covid at the last minute. He broke from half way, leaving all in his wake, to run in under the posts. The conversion by Ben Pearson from in front was successful and Hoppers were off to a lively 7 – 0 lead.

Play resumed and the forwards exchanged moves across the middle third with a succession of line-outs and penalties which eventually gave Billingham some territory inside their hosts’ half. The ball was delivered to the wing and number 11, Lawson, scored in the corner. From wide on the touch line, the conversion by their captain, Evans, was good and the scoreboard now showed 7 – 7 after twenty minutes.

Hoppers restarted and the forwards’ contest resumed its formidable battle which resulted in Sam Gale being shown a yellow card. Billingham were quick to capitalize on their advantage and pressed into the Preston Red Zone where their centre, Wilson, broke to score left of the posts. From the stand he appeared to have lost the ball in the grounding but the try was given by the referee who was in a good position and with an easy conversion Billingham took the lead by seven points as the clock approached the half hour.

With the player advantage, Billingham continued to press their hosts’ defence and a penalty inside the Hoppers’ half pushed their lead to ten points when Roxby hit his target. 7 – 17.

Hoppers were not fazed and from the restart they struck back when the ball was fumbled by Billingham and pounced upon by replacement Craig Procter, who then raced down the wing to score in the corner. Pearson again had his kicking boots on and his conversion from wide on the wing was confidently accurate as Preston began their climb back towards the lead with the score standing at 14 – 17.

Three minutes later that climb reached its summit when Procter again scored from a delightfully weighted cross – field kick which he collected on the burst as he crossed the try line. Pearson stepped up and the conversion was a replay of his last one so, as the whistle sounded for half time, Hoppers went to the sheds leading by a slim margin of four points. 21 – 17.

The half had been ill-tempered and scrappy for the most part with the Billingham forwards pressing their hosts’ defence inside their half for the greater part of the period.

Hoppers, as usual, defended well and the tries by both sides came from exciting breaks which lifted the entertainment level for the watching fans, a large section of which was made up by a coachload of Billingham supporters who were noisily enjoying themselves in front of the clubhouse.

Billingham had a powerful pack and had looked to dominate but Hoppers were well organised and defended the attacks with confidence allowing them to take the field for the second half with a slim lead.

That lead was extended from the start when Hoppers collected their own restart kick and, with a slick set of passes, moved the ball to the wing and the supporting Procter who darted over in the corner for his hat-trick and Hoppers’ Bonus-Point try. This time Pearson’s attempt slid past the upright but the scoreboard showed the home side had established a healthy, nine point lead, after just fifty-six seconds of the second period.

Play resumed the pattern of the first half as the forwards battled for supremacy. The watch was stopped for an injury to Lamprey who caught a boot in the face which had him sporting two blackening eyes after the match but did not prevent him playing on.

Indeed, so good was his recovery that just nine minutes later he looked to have made his own score when he executed his trademark dart from the base of the scrum only for the ball to be kicked away as he grounded it. The referee took a very dim view of that action and awarded a penalty try to the home side. Great for the Preston faithful, disappointing for their number eight who is heading towards the top of the list of leading try scorers for the Club.

Lamprey got the fans excited again when he broke from the restart and took the ball into the Billingham 10m area. The dour struggle between the packs then upset the referee again and he called the captains over once more.

When play resumed Billingham were awarded a penalty when replacement Ollie Trippier was deemed to have gone over the top in a tackle. However, this decision was reversed and the kick took Hoppers down towards the Billingham 22.

The line-out was secured and then collected by Sam Stott who left the defence floundering as he broke to score, left of the posts. Pearson made no mistake with the conversion and as the game moved into the final quarter, Hoppers had a commanding lead at 40 – 17.

Things became more untidy for the home side as they seemed to relax having gained a good lead. However, the game was not over and with a yellow card shown to captain Chris Taylor for what looked like an unfortunate high tackle, Billingham were able to make headway once again scoring two unconverted tries in the space of five minutes to bring the score to 40 – 27.

With just eight minutes left on the clock Hoppers were further penalized when Tripper fell foul of the referee and was sent to the naughty step. Hoppers weathered the ensuing pressure and saw out the game without further score to win 40 – 27.

After the match Club Captain Ali Murray gave his honest appraisal of the game:

‘Scrappy, a lot of mistakes but, ultimately, another five points.

We knew they were going to be tough, that they’d bring a lot of fight, a lot of heart and a lot of dogged resistance but we say every week, ‘it’s about us’. If we can shut out all the outside noise, the opposition, the referee, the weather, we will win the game and thankfully we made enough good plays and forced enough errors that led to our tries and that’s what counts at the end.

Yellow cards cost us this week. When you spend half an hour of the game with fourteen men it’s not good and with the positions of those players it disrupts you straight away, particularly at the line-out and scrum because the change in players there alters the way those set pieces are played. But, again, that’s ‘outside noise’ and we overcame it and gained a good result’.

‘To sum it up, when you get the team in the huddle at the end and they look like they’ve lost, then you know they’ve not had the best team performance.

We got caught up in little niggles at the breakdown and I think we took our eye off the ball and our mind went. There were people losing their heads, interacting with the crowd, it was very scrappy.

But I think that in parts there was a lot of really good stuff. They are a big side and it was our indiscipline that let them get their scores really. They have a very experienced ten who put them in the right areas but they didn’t really break us lots of times and our defence was good on their big fellows. Our set pieces, particularly the line-out, could have been better but our scrum, when you consider their front row was over twenty-two stones per man and they’re thinking that they are going to roll everything over, then we’re sending them back at a couple of scrums like they were wearing roller skates, was up to it and it turned the game.

I think the big turning point was in the second half when they had a driving line-out in our bottom left hand corner and we absolutely drove them back. Having scored just before that I think that that was the point when our lads saw they could beat them.

We got the couple of scores ahead and then we just relaxed a little and, along with the yellow cards, that made the rest of the game a bit harder than it maybe should have been.

Overall it’s five points. They are a decent side, they pushed Otley very close two weeks ago so we knew they were going to be up there or thereabouts and it leads us perfectly into next week against Blackburn.  A local derby, and a big set of forwards, they are going to try and do exactly the same, try to get under our skin, get us rattled, and we have to learn how to deal with that. The best way is to put forty points on them, if you fall into the trap of trying to hold on in a tackle or push heads down you allow yourself to be drawn into their game so what you need to do is just batter them on the scoreboard.

I think Craig Procter was probably the best substitution I’ve ever made. I brought him on, he scored straight from the second half kick off and then he scored two more. John Powell as fourth official was puzzled when I said ‘Gale off and Procter on’ until I explained that Ben Dorrington was to move to seven!

He was another who put in a great performance, playing at twelve, seven and nine today and along with the front row and Lamprey, together with the backs who ran through the lines it wasn’t a bad show.

Obviously the three yellow cards hurt us and when we’ve been working on our discipline that’s unacceptable but they had cards as well so it balances out.

Overall, it’s five points so you’ve got to be happy. Next week’s the big one so we will concentrate on that now.’

As it is a local derby at Blackburn, it’s not too far for supporters to travel so let’s get behind the team and help them continue this winning streak, 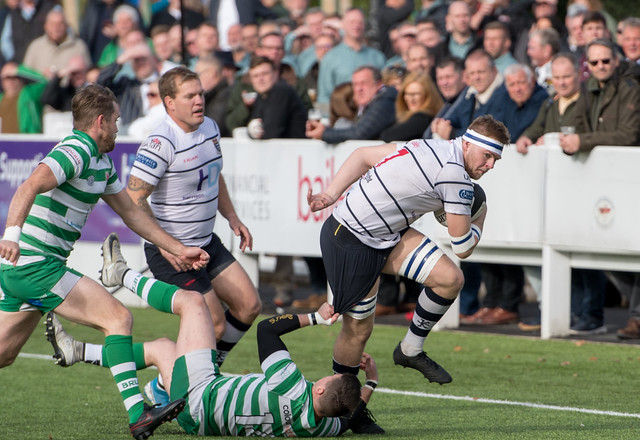