Arnie made a number of changes this week in the wake of the tight game at Blackburn last Saturday and gave a brief run down before the game:

‘Chris Taylor is injured so Harry Holden gets his first start for me. He’s impressed in training, his lineouts have been very good and it’s his birthday today so let’s hope we get a win.

Matt Crow is fit again so we’ve put Ben Dorrington back into the pack and although he’s been doing a good job in the centre, he is better at seven.

Harry Moulding was injured in training on Tuesday but should be back in a week or two and, luckily, Jake Squirrell, who was injured, has recovered and can continue his run of really good performances.

Ewan Naylor is unavailable today and Toby Harrison has been playing well off the bench so he deserves a start and Sam Gale will be brought on later.

I’ve rotated the wingers and put Jacob Browne at fifteen. Tom Walker is back to fitness and playing for his university so whilst I was aiming to ease him in gradually, he will come on at some point.’

Therefore it was a significantly different team that took to the field in wet, still and cool conditions to face a Lymm side who had played well against Otley in a 15 – 33 loss last week, and, having scored 68 points against Northwich the week before, were coming to Lightfoot Green with some confidence.

Hoppers kicked off towards the scoreboard end and were immediately pressing in the 22. Lymm had a line-out on their 10m line but the ball was secured by the Preston forwards and delivered across the pitch to Ben Dorrington who broke away to leave the defence watching as he raced the 40m to score under the posts. Ben Pearson, with the easiest of conversions in the play book, slotted the ball over and with less than two minutes on the clock, Hoppers were on the march, 7 – 0.

Lymm restarted and Hoppers, having collected the ball, pressed to half way. The visitors gained possession and worked the ball out to the wing where it was cleared long towards their hosts’ 5m line. Pearson caught it and called for the ‘mark’. His kick took the home side to their 22 from where a passage of play had them with a line-out on their 10m line.

The ball was passed out to Jacob Browne who dodged several tackles to feed today’s captain, Sam Stott arriving at speed. He made good metres into the Lymm 22 before passing to Matt Crow to dart in at the corner. However, he was fouled in the act of scoring and Hoppers were awarded a Penalty Try. 14 – 0.

By this time it was becoming apparent that the home side had control. Lymm were known for their running game but they had brought some big forwards with them and looked as though they intended to take on the Hoppers’ pack and battle their way to a win.

If that was the plan, it failed to work as, with just over twenty minutes of the game gone, Hoppers had the Bonus Point in the bag with tries scored by Stott who again broke from the Lymm 22 to touch down under the posts and then the almost inevitable steal by Matt Lamprey who, from a Lymm scrum on their own 5m line, then went over to the right of the goal.

His try was not converted but after a quarter of the game the score stood at 26 – 0.

Lymm started again and when they had the ball, were more than capable of some fast, passing phases but they were all too often matched by superb interlinking play from both forwards and backs as their hosts swept them back.

Hoppers had a scrum inside their own 10m line, the result of a Lymm line-out that was not straight. The ball came to Pearson who made a break into the opposition half before executing a delightful ‘50/22’ grubber kick into the Lymm Red Zone.

The visitors managed to secure the ball and were given a penalty on their own 10m line but the ball did not make touch and Pearson quickly sent it back up the field. Lymm then broke towards the Hoppers’ 10m line where it was knocked on, handing another scrum to the home side.

They drove their visitors and the ball was picked up by Browne who then unleashed a jinking run into the opposition 22 before passing to Jordan Dorrington to score in the right hand corner. Pearson was deadly from out on the wing and with less than ten minutes of the half to go, Hoppers were truly in the driving seat. 33 – 0.

Lymm pressed on and were awarded a penalty when their player was tackled in the air on the Preston 22. From the line-out they had a number of phases which brought them to the try line and enabled prop Riley to cross the whitewash. The try was converted by full back, Redfern and Lymm now featured on the scoreboard as the end of the half approached. 33 -7.

Grasshoppers chased their restart and although Lymm were able to clear to their 10m line, their hosts gathered the ball and were immediately pressing the 22 out on the right wing.

Hoppers had a penalty, and from the line-out on the 5m line, Ben Dorrington trotted in his second just right of the posts. Pearson was on target again and the half ended with the score at 38 – 7.

Lymm made a fast start to the second period and were quickly attacking inside the Preston half. Hoppers had a line-out where the ball was lost. Their visitors pressed on to the 22 but then they were given a scrum on their own 10m line where, after a strong drive, the ball was stolen once again by Lamprey at the base and passed out to the charging Stott who managed to juggle the high pass whilst keeping his momentum and break away to score just left of the uprights. 45 – 7.

The half then played out in much the same way as the first period. Lymm kept up their efforts to attack their hosts 22 but were denied further success by a string of superb passing phases again showing the link-up play from a now dominant Hoppers team.

This was never more clearly seen when a passing move inside the Preston 10m released Tyler Spence who blazed down his wing beating four or five attempts to tackle him before he scored the eighth try of the match. The conversion was good and the score moved on to 52 – 7.

By now Hoppers were rampant and four minutes later when Sam Gale made a break into the Lymm half and passed to Spence to chip forward, Toby Harrison gathered and scored. Again Pearson was accurate, 59 – 0.

The tenth try was not long in coming as the breaks and passing play were relentless and with less than two minutes of the match remaining Pearson was able to score and convert his own try to make it 66 – 7.

Then, with clock about to go red, Lymm took a quick tap penalty inside the Hoppers’ 22 and Higginson dived over. The conversion by Redfern was good and as the ball drifted over the posts the whistle blew for the end of the match. The final score was 66 – 14.

Byron McGuigan was pleased with the performance.

‘I really enjoyed it. The boys stuck to the plan which we’d spoken about throughout the week and obviously executed, it as the scoreboard shows. I thought the set piece was brilliant also, the backs’ decision-making today was outstanding and for myself, having the chance to come down and watch them was great.’

Arnie was grinning from ear to ear:

‘After last week we spoke about our discipline at the breakdown. I sat down with Byron and then we asked the lads what they thought their strengths were. It was obvious that defence has been our greatest so we made a decision not to compete at the breakdown, to box kick and put pressure on their defence to make them make the mistakes and it looks like it worked pretty well.

When you consider that their forwards were much taller than us, we were outstanding in the pack and Harry Holden, coming in for his first start for me and on his birthday had a great match. His line-outs were good, his scrummaging was excellent and he was great around the park.

Jake Squirrell, who couldn’t play last week, came back from injury and controlled the game superbly and it’s a testament to the lads that in the huddle after the game they were disappointed that they’d let them score in the last minute.

I think that after last week they felt they’d let everyone down and wanted to set that right. The last season we played Lymm it was between us and them for the points. They’re not a bad side so to get that many points on the board today, I’m really pleased. We just need to keep the momentum going now.

After the week off we have Kirkby Lonsdale away and whilst they are not having a great season, we lost up there last time.

The good thing is that the backs in the Second Team look really strong. There are players back from injury and one or two new ones who are impressing so I’m looking forward to seeing how they do because that creates pressure for places and I think that’s good for the squad.’

The purists among us may say that a dominant win like today is not as appealing as a tight-fought, close match such as we saw last week. However, the performance showcased the individual and team skills this squad has and they should be celebrated.

There is another week off next week before we take on Kirkby Lonsdale away. Again, it’s not a long trip, so let’s get there in numbers and spur the lads on to another victory. 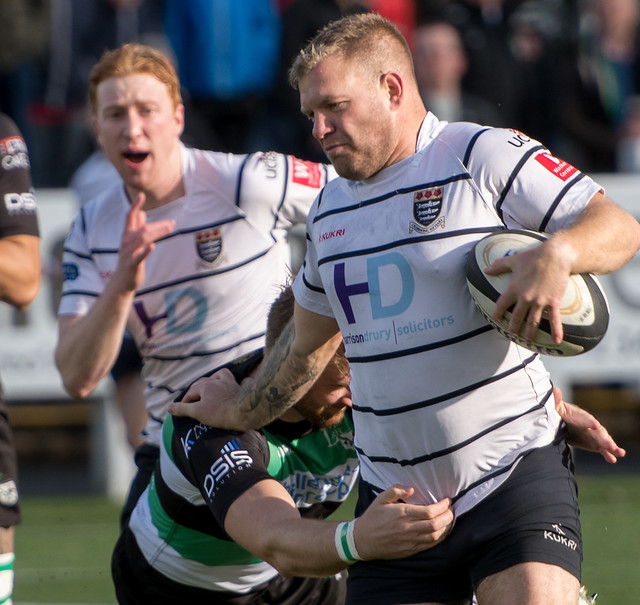