With promotion to the fourth tier of National Rugby already secured, Hoppers rounded-off their successful season with a dominant win over a tough Widnes side to lift the John Burgess Lancashire Cup at Wigan’s Douglas Valley ground.

The fixture had been delayed beyond the end of the playing season and the team was without some of the key players who had featured throughout the campaign but they still put on an impressive performance, running in nine tries in what was Head Coach Paul Arnold’s last match in charge.

From the kick off Widnes stoutly defended their territory against Hoppers who took the game to them with fast breaks and passing moves pressing deep into the opposition half.

The first try came in just ten minutes when, after breaks by Jacob Browne and Tyler Spence had been repelled, Ben Pearson collected a Widnes clearance to take a quick lineout, sending Browne to the opposition’s 10m line for Spence to sprint down his wing and score in the corner. Pearson’s conversion attempt from out on the wing slipped wide but Hoppers were on the scoreboard, 5 – 0.

Despite the onslaught of energy-sapping tackles they were taking, Widnes came back hard and were rewarded with a penalty on the half way line. Full back Owens, backing himself from the off, tee’d up the ball and stroked it confidently through the uprights. 5 – 3.

The game then settled into a pattern with Widnes constantly defending in their 22 as Hoppers repeatedly attacked their line.

Their efforts were awarded with another penalty just inside their own half but this time Owens’ kick fell short of the mark and Hoppers immediately responded with a kick chase from Will Clapham sending them into the Widnes half where a knock-on gave them a scrum. The ball came out to Spence who made a charge through the defence before executing a neat kick pass towards Clapham who was racing up the wing. The Widnes defender denied him possession but Hoppers gained a lineout from which they were awarded a penalty. This was quickly tapped and the ball was delivered to Spence to repeat his performance in the corner. This time Pearson was successful and Hoppers started to show their class.

The third try came only minutes later when Browne ran in after being supplied by Clapham who, having received the ball on the half way line, danced his way through a bewildered Widnes defence before feeding the full back to score. 19 – 3.

Hoppers were now firmly in the driving seat and spent the rest of the first period inside the Widnes half. There were several close calls which would have seen more tries had they not been foiled by a miss-handle or a knock on.  Indeed, it was Widnes who had the best chance of adding to the score when they intercepted a wild pass inside their own 22. The winger, with an open field in front of him must have thought he was home and dry when Ben Dorrington appeared from nowhere to make an outstanding try-saving tackle.

The fourth try by Hooker, Harry Holden, was the result of a powerful forwards’ attack on the back of a good set of passing phases, leaving the score at the break, 26 – 3.

Although Hoppers had spent most of the first period inside the Widnes half, their opponents had proved a tough proposition and, despite four tries against them, had kept up a stout defence. However, fast, deft handling and relentless forwards’ pressure had been too much for them and they faced a second forty minutes against a side that had already shown their credentials and Hoppers were able to execute their game plan and control the game in the second half.

Within three minutes of the restart Toby Harrison was on the end of a break by Ally Murray which had taken him from half way, into the Widnes 22, and the flanker was able to dot down under the posts. Pearson slotted the extras to make the score 33 – 3.

There was then a seven minute lull before what was the best try of the match was scored.

Murray charged down an attempted clearance kick on the half way line and passed to Browne who carved his way through the opposition before executing an outstanding ‘back-door’ offload under pressure to the supporting Clapham to run in at the corner. The conversion slid by the post but the score moved on to 45 – 3.

It was then Murray’s turn to score after a break by Spence from inside his own 22 down towards the Widnes Red Zone sent him in just left of the upright. Pearson made the extra two and Hoppers moved on to a forty-nine point lead.

Pearson initiated the final try for Hoppers when he kicked from his own 22 deep into the Widnes half where Sam Stott collected the ball, passing to Dorrington on the 5m line to seal the try. With Pearson under no pressure from in front of the posts, the score ticked on to 59 – 3 with just ten minutes of the match remaining.

However, Widnes rallied well in the final minutes. With fast passing moves, they made several breaks into the Preston 22 and were finally rewarded with a try by their full back, Owens. They might have had a second only minutes later when an intercepted pass inside their own 22 sent winger Kraus racing into the deserted Hoppers’ half only for his effort to be foiled by the referee who was playing the advantage from an earlier high tackle.

The final score was 59 – 8, making it a third Lancashire Cup win for the Club.

‘The first twenty minutes were tough, we knew they were going to come at us, it’s a cup final after all, but to stick at it and then pull away in the second half was nice.’

‘There’s not many better ways to end the season, a cup win, promotion, it’s a great way to send Arnie off and a good way to go forward into next year’

‘Firstly, I want to say ‘massive credit’ to Widnes, they played really well. We knew it was going to be a bit tough for us because we’d not played for four weeks and we had a few boys missing. We also knew we had a good enough side and I thought they came at us really hard but, defensively, we were really strong, and the team showed just how good they are today.

And then, what can I say about this squad? I’ve run out of superlatives for these lads since our defeat to Alnwick in December, and since then we’ve not lost a game. I’m just so proud of all of them.

I want to say a massive ‘thank you’ from me to everyone associated with the Club, the 1869 Club and the back-room staff who have all been immense. I’m going to miss the place a lot’.

And the Club are going to miss the huge character that has guided the team to obvious success. We wish him well in his new role as coach at West Park, the club he started his rugby at and no doubt we will see him again in the future.

So, we now take a short break before starting a new campaign, under a new coaching team, in a new league. There’s much to look forward to and the squad can be certain that they will have as avid a following as they have had this season.

Have a great summer, and let’s look forward to the 22/23 season. 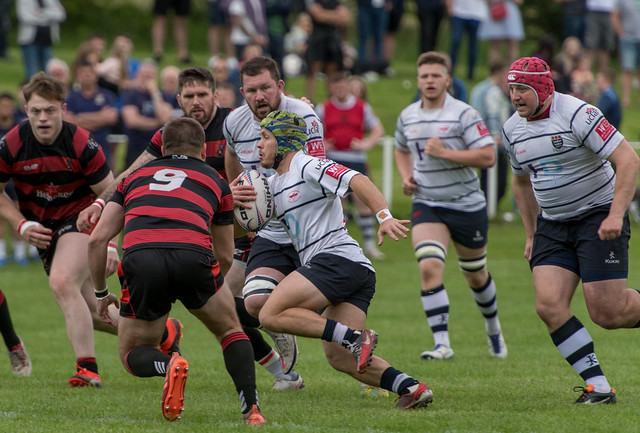