Dore Moor is probably the most elevated and exposed ground in the League and with a strong wind blowing the length of the pitch interspersed with light rain, this fixture was always going to be a game of two halves.

Hoppers travelled with a number of changes to the squad. Matt Lamprey and John Blanchard were unavailable so Oga Mabaya started at loose head and Ryan Carlson at eight. Dan Madden made a welcome return to the bench alongside Olly Trippier who joined Adam Howard, James Gough and Sam Stott as replacements.

It was also great to see PJ back with the team, albeit as a spectator and we all wish him a speedy, full recovery.

With no shelter for the faithful of either side it was a well wrapped up crowd of supporters that lined the pitch as Sheffield kicked off with the wind behind them.

The ball was collected by Ally Murray and there then began a series of over twenty phases of  possession by the Hoppers’ forwards which took them from deep in their own 22 to beyond half way.

The ball was lost in the tackle and Tigers were able to move back into their opponents’ half. Hoppers were awarded a scrum on their 22 but from it Sheffield were awarded a penalty and with the wind squarely in his favour, fly half Ireland opened the scoring after just eight minutes.

Play for much of the game took place in the middle third of the pitch with both sets of forwards stringing phases together in a real battle of strength against the elements.

Kicks forward were sent flying down the field and the unrelenting wet wind did not help either side’s handling game.

The Tigers fought their way to the Hoppers’ 22 and whilst they had a lot of possession they seemed unable to break their visitors’ defence. They were awarded a penalty for an offside infringement which took them to the 5m line for the first time. Hoppers defended the lineout and started to push back up filed when a knock on denied them possession and gave their hosts a scrum fifteen metres inside the Preston half.

Sheffield started to drive and the Hoppers’ forwards responded, holding firm until the Tigers’ number eight, Wallace managed to break away and score left of the posts. Ireland’s conversion failed but Hoppers found themselves 8 – 0 down after less than a quarter of the game.

At this point Hoppers made the first of their tactical changes as Nick Gregson gave way to Sam Stott and Toby Harrison was replaced by Adam Howard.

Play resumed around the half way line with Hoppers having most of the possession, their forwards making good yards in the difficult conditions and Noah Miller in particular carrying the ball time and again to inch the team forward.

However, their efforts were thwarted when Sheffield were awarded a penalty on the Hoppers’ 10m line. This time Ireland’s kick was on target and the ball flew between the uprights as the jet stream sent it on its way and the Tigers’ lead stretched to eleven points.

Hoppers were then given a welcome advantage when Tigers’ Symcox tackled Ryan Carlson high and was sent to the naughty step.

A break by Jordan Dorrington from his own 22 took the visitors down to their hosts’ 22 and only some vigorous tackling and a clearing kick to the Hoppers’ 22 saved the home side’s lead.

Hoppers pushed on into the Tigers’ half but despite being a man down, Sheffield defended well and with some strong counter rucking managed to gain possession in the face of the battling Preston forwards.

Now back to fifteen players they pressed on into the Preston half where another high tackle on the 10m line lost them possession and Tom Davidson was able to find touch on the Sheffield 10m line.

Play resumed its pattern in the middle third of the pitch with neither side gaining momentum until a break by Carlson moved Hoppers forward and his pass to the sprinting Jordan Dorrington saw him again breaking the Tigers’ 22.

The ball was lost forward but from the scrum Hoppers were awarded a penalty in front of the posts on the 22. This time with the ball being steadied on the tee, Davidson slotted the kick and three minutes later the teams went to the break with the score at 11 – 3.

With the wind a major factor for both sides the half had been a battle between the forwards but despite having had the majority of the possession Hoppers had not been able to take advantage of the yellow card.

They started the second half with a well-judged kick into the Tigers’ 22 where the hosts found themselves defending doggedly and for a good ten minutes they were pinned inside their own half.

When they managed to break away Hoppers regained possession, Miller’s notable carrying and tackling enabling them to return the play to the Tigers’ red zone.

For almost thirty minutes this contest continued, with play moving from one 22 to the other through scrums, handling errors and penalties, without further score.

Then, after Sheffield had pushed to half way and were putting a series of phases together Jacob Browne seized the opportunity to kick forward. With the wind behind him he chased the ball all the way to the Tigers’ line, leaving all in his wake only to be tackled as he attempted to touch down.

Hoppers then had a scrum on the 5m line and Ally Murray capped a solid performance by crossing the whitewash at last.

TD converted and with just over ten minutes remaining, Hoppers were back in the game having reduced their hosts’ lead to just one point.

The Tigers hung on and held their visitors out until a penalty on the 10m line gave Hoppers a chance of victory. Davidson tee’d the ball and struck it well only to see it carried wide by the wind.

The final ten minutes saw all the pressure coming from the Hoppers and they might have succeeded in closing the game but for two kicks which, on any other day would have put runners in for a try, were sent forty metres beyond the try line as the wind had the final say.

Arnie was his usual honest self,

‘In these conditions it’s just small margins that make the difference, you have to take the chances.

Sheffield are a good side and difficult to break down here. Again we had most of the possession but the game was decided by key moments, that penalty goes over and we win the match. As it is we come away with a point.

They won the first half, we won the second. The chances we had towards the end were frustrated by the wind, two sensible kicks went flying forty metres away.

The lads are hurting but again I cannot praise their attitude enough. The commitment, effort, work rate and desire were obvious and they are as disappointed as I am to lose this one.

The next two games are critical if we are to stay in this league but it is not an impossible task.’

We are back home again next week as Wharfedale come to Lightfoot Green. Then we have an away match against Huddersfield and the 1869 club have a coach booked so sign up for that one and help the team on their way. 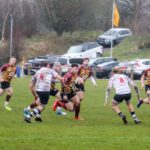 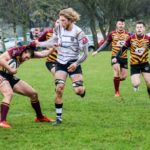 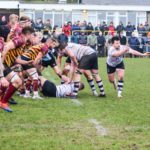 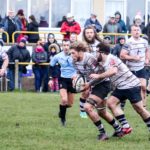 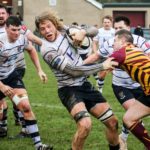 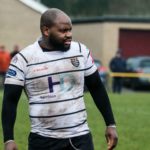 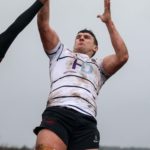 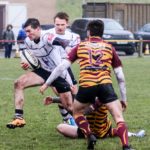 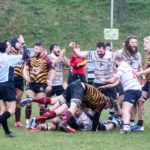 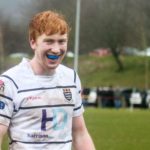 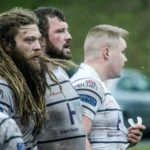 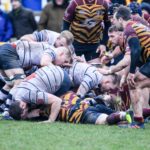