Hoppers were given a real scare and were fortunate to leave The Memorial Ground with a victory over Stockport.

Hoppers never really got going in this one, with the set piece surprisingly faltering and a real lack of cohesion with the ball in hand. One positive to be taken from the game however is the fact that Hoppers somehow managed to win which is credit to the character of this young team that at times looked flat but found a way to score a try when it mattered and then defended strongly against a spirited Stockport attack.

Head Coach Garth Dew said; “A win is a win and its four points, we didn’t take Stockport for granted at this is a tricky place to come to but to be honest we came here expecting to get five. Stockport did well, they lived of scraps and turnovers as we made a lot of bad errors and mistakes, there was no lack of effort as the defence shows we just lost our heads with the pressure of winning and made bad decisions.”

“Last week was very good but I think we got out enthused by Stockport who were keen with the ball but we have the lads to do much better. The hunger at the end to go win the game was pleasing. The score was a great effort from Olly Carter, the bench again made a real impact, and then the defensive effort led by Chris Taylor, Ally Murray and Reece Tomlinson really stood up for a last ditch effort.”

In truth this wasn’t a good game of rugby with many mistakes and silly errors leading to a scrappy contest that had little momentum from either side. Throw in a few confusing refereeing decision and this will be one that both teams will be happy to forget, even though Stockport put in a good shift to claim their first point of the season.

Hoppers turned the ball over in contact too many times and Stockport seemed happy to kick away possession leading to a first half with just three penalty goals to show, two coming from the boot of Hoppers full back John Embelton giving the visitors for a 6-3 lead at the break.

In the second half Stockport looked to keep the ball alive and played with more adventure, which caused Hoppers more trouble with a fast and frantic approach especially from quick taps as the penalty count rose quite high.

However, it was Hoppers who struck first as Phil Baines, playing on the wing, went over in the corner after a solid 5m scrum and quick hands down the short side. Hoppers had forced a turnover deep in Stockport territory and finally made their forward advantage count.

Those who thought this would kick start Hoppers to a comfortable victory would have been surprised as it was Stockport who responded well with two quick tries as Elliott Fletcher and Andy Fuller both scored with Hoppers defence looking disjointed for a ten minute period.

After Embelton and Josh Longmore exchanged penalties it looked like the game was slipping away before a scrum in midfield gave Hoppers a chance to attack. A planned move looked to have been stalled but Carter chipped over the defence into an area that the home full back couldn’t deal with allowing the replacement to kick through and win the foot race to the ball to ground in goal.

With five minutes still to play Stockport looked to work into a position for a drop goal but Hoppers were alive to the plan and gave the kicker no space and they sealed the game when they managed to bundle former Hoppers Jordan Pearson into touch agonisingly close to the line for the home support.

Looking ahead to what could be a difficult month Dew commented; “rugby nowadays is a seven day cycle so we will have to learn from this and improve, we play some big teams in the next few weeks starting with Amthill which will be a real test.” 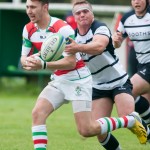 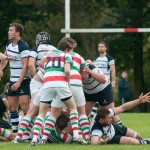 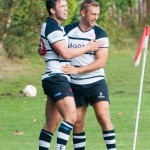 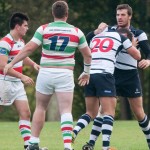 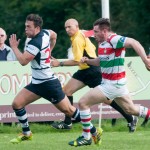 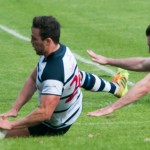 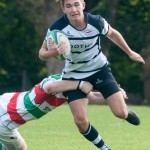 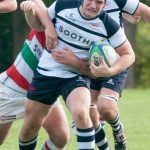 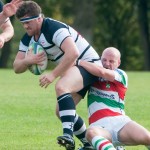 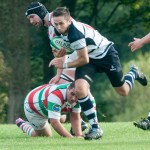 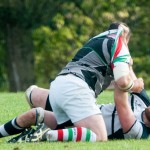 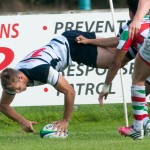 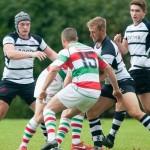 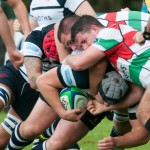