The Under 7s took part in the Manchester festival this weekend and the boys and girls were marvellous given their limited involvement in tournaments and it was an eye opener for the coaches also. Everyone had a great day and all that turned up had plenty of game play. We played 6 games in total and the format of the day for the age group was non scoring games so that all were winners. However there was extra effort and determination put into the games against Flyde which were the best games of the day.

The day culminated in all teams receiving certificates from players at Sale Sharks. The were some great tries scored, epic tagging and great effort all round, thankfully with no serious injuries. Smiles all round at the end of the day. 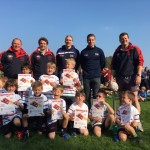 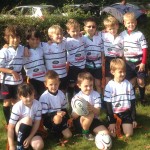