It has been a busy start to the season for the under 8s. Despite the setback of England not progressing into the RWC quarter finals we have still seen a big increase in the squad size with all of last season’s squad being bolstered by a set of new and enthusiastic players. Things are starting to settle down and the fixtures started with a mini tournament at Kirkham followed by Festivals at Manchester and Rossendale.

A late request to support a 5 team tournament and thanks to those parents who were able to make sure players were available. We sent one team to the fixture and they performed really well. 4 games played with 3 wins and a controversial draw (we were robbed)! – A winning start for the season though so everyone was happy.

For this Festival we had to split the squad and two teams went to Manchester and the remaining players stayed at Hoppers.

Both travelling teams did really well, one team started brightly and faded a little after the hotdog break and the other had a slower start but reacted better to the Sportsman’s Lunch and had a storming afternoon. As a non competitive festival everyone was a winner but the general feeling from the day was we definitely scored more tries than the opposition!

A Second Festival in two weeks and another split squad. This gave the rest of the squad a chance to get an early game in and a number of new players experienced a tournament for the first time. Yet again the two under 8 teams put on a really good performance and on this occasion both teams progressed to the Quarter Finals. Another cracking day and everyone left with a medal and a smile. 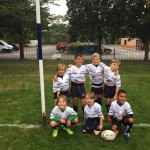 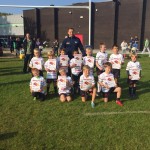