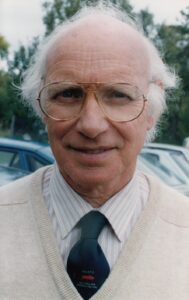 The tribute below from a Hoppers Stroller is very fitting.

“A true Hopper a great asset to the club. Very sad news. He was the last of the Hoppers of his era.
You could mention his name at any rugby club in the north and you realised how well known and respected he was. Ran the line for many years and was always fair to both sides. His persuasive powers as team secretary to get players on the away coach were what legends were made of.
Good to have known him and enjoy his company on many occasions maybe didn’t always agree with him but respected his views.”

George was born in Huddersfield and educated at Ilkley Grammar School. A term of national service took him to various parts of the United Kingdom. He had fond memories of his time in Scotland spending time in camps near to Helensburgh and Elgin. Amongst the roles he undertook were helping to educate the less skilled of his fellow recruits whilst in the technical area he was a weapons instructor. Weekends in Scotland might involve his captain leading a small party on a strenuous walking expedition. Inevitably map reading skills would locate a suitable hostelry for the intake of some liquid refreshment.

George spent his working life at Springfields with the United Kingdom Atomic Energy Authority and British Nuclear Fuels. It was there that he would meet his future wife Doreen. These were the days when large employers believed the provision of sportsgrounds helped to retain staff. George took full advantage of the facilities and would organise and play cricket for many years.

In the early 1950s George became involved with Hopper’s and met up with his fellow Yorkshire exile Les Anson. There was some challenging years for Hoppers but George and Les were key figures performing many and varied tasks in keeping the club going. Amongst the many roles George undertook was that of team secretary. The challenge of the “home only” and “late cry off” brigade would try anyone’s patience but George managed to carry out this role from 1959 to 1973.

George also became a longstanding member of the Manchester and District Referees Society. He was the club’s representative to the Society from 1975 to 2005.
George was President of Hopper’s from 1998 to 2001. George, in office, was proud and committed. Ask any first team player about his years in office and they will vividly recall his rousing pre match addresses.

Meanwhile his cricket playing days were over which led to George taking up umpiring. He stood in the Northern League in the days when many a club professional was a current test player. Once his umpiring days were over he could be found on summer Saturdays at Highfield the home of Fulwood and Broughton Cricket Club. Les Anson would also be there and the double act would be in full swing. George would use his knowledge of the laws of the game to explain why umpires might have made their decisions and Les would advise opposition fielders if their appeals were too loud or frequent.

In 2013 George moved to Scotland to live with his daughter Yvonne in a property which overlooks Loch long. Despite being in his late 80s his first visit to to Helensburgh Cricket Club brought an invitation to join their group of umpires. He declined. He enjoyed working the large garden on the hillside overlooking the Loch and took in a rescue cat which regularly brought him presents from the surrounding countryside. He keenly followed the fortunes of Preston Grasshoppers and Fulwood and Broughton cricket clubs until his death.

George specified a no frills send off so the occasion will be family only. Anyone wishing to make a donation in his memory should send it to Saint Catherine’s Hospice.

A loyal tireless and generous man may he rest in peace.