Preston Grasshoppers complete their season as it started with a fixture against Yorkshire side Sandal, this time played at Lightfoot Green, kicking off at the slightly later time of 3pm.

The game at Sandal gave Hoppers supporters a glimpse of what was to come in a number of games this season when a late converted try gave them a narrow victory from a situation that looked a lost cause with just a few minutes left on the clock.

Unfortunately the trick couldn’t be repeated last week at Billingham when the visitors suffered just their second defeat of the season.

The team’s resilience in these situations during this season has been the main contributing factor to their success and given them the deserved title of Champions. Let’s just hope for a less stressful eighty minutes to round the season off!

Hull secured the play-off place from our league last weekend and will guarantee  home advantage over either Peterborough or Newport if they can gather a couple of points at Rossendale this Saturday. This will be no easy task though as the East Lancashire side are in a rich vein of form, winning their last seven games.

The battle for survivors in National 2 North still isn’t clear cut and you can perm any three from six for the drop, although Sheffield look least likely to survive from the group which also includes Luctonians, Blaydon, Wharfedale, Sheffield Tigers and Leicester Lions. Up at the top Sale are still favourites for automatic promotion and Sedgley Park to visit Chinnor to fight it out for the other promotion place.

Relegation from National 1 is even less clear. Apart from Fylde who are already for the drop, the other two places could come from any of seven candidates up to and including Caldy.

As for this weeks game at Lightfoot Green, the first meeting between Preston Grasshoppers and Sandal took place nearly twenty five years ago with a club fixture taking place at the same venue on the 3rd of April 1993 when Hoppers ran out the victors by twelve points to the visitors three. A return fixture was made for the following season over in Yorkshire where the home side ran out narrow winners by four points in forty four.

The clubs didn’t meet the following season but came up against each other for the first time in league action on the 21st of October at Sandal where the home side won on the day by sixteen points to five.

All told there have been twelve meetings between Hoppers and Sandal, with ourselves having a narrow advantage thanks to double wins at Lightfoot Green and Yorkshire two seasons back. Amongst these games there have been nine league matches in which Hoppers have won six to Sandal’s two plus the thirteen all drawn encounter.

An interesting fact regarding our opponents is noted in Malcolm Crane’s book, “The Rugby Clubs of England” with reference to how they decided on the colour of their shirts. Malcolm writes that initially the club played in green and white hoops, but changed to their current maroon gold and white in 1930 when at a meeting to decide on these particular colours the committee sat at a table covered in a maroon cloth on which was placed a gold and white packet of Wills cigarettes!

A copy of this most fascinating book which reflects the history of numerous rugby clubs around the country can be purchased from the Hoppers Club Shop. 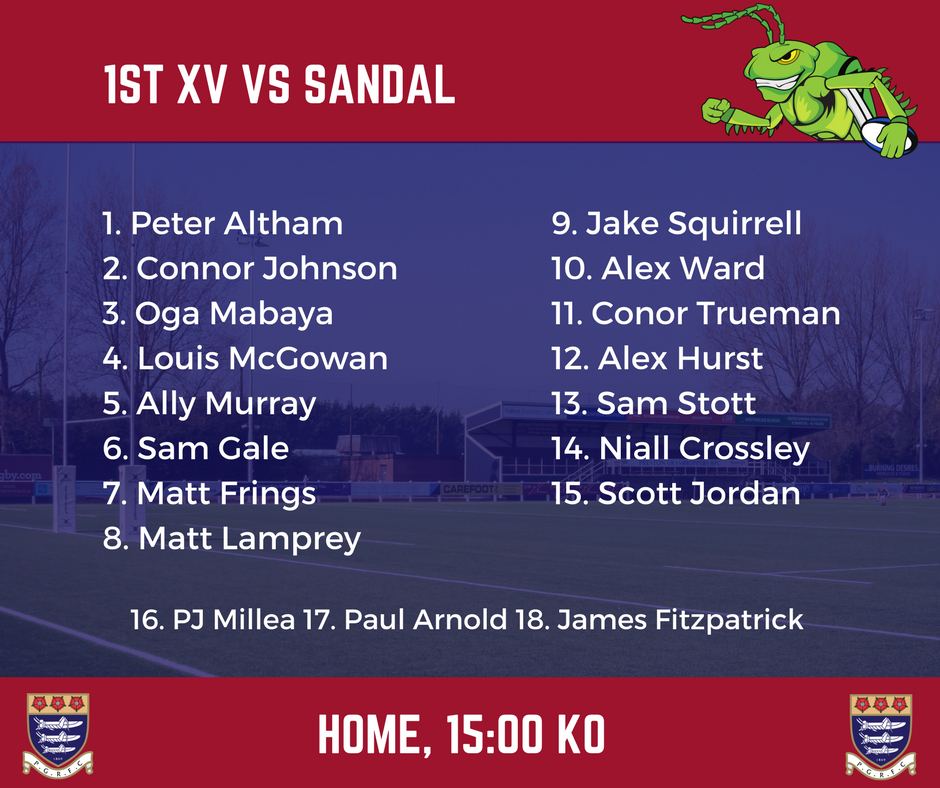 As a remarkable season comes to an end it’s worth noting that not only have the 1869 Club run a record number of trips to away games this season, with only the trip to Hull being missed, the 1st XV have either exceeded or created eleven new club records and victory over Sandal would equal another!

On to personal achievements and Jobe Roxby made his first start for Hoppers last week at Billingham whilst, if selected this week Niall Crosley will be making his fiftieth appearance during which time he’s scored sixteen tries.