Hoppers will be looking to get back to winning ways against Otley this Saturday following three successive defeats to teams placed higher up the table in Fylde, Huddersfield and Sedgley Park.

Otley also sit above Hoppers in the league table having gained an additional 10 points on Hoppers to sit in 5th place with 56 points compared to Hoppers’ 10th place with 46 points. The visitors arrive looking for a third consecutive win following victories over Wharfedale and Sedgley Park which see them unbeaten in 2019.

Notably despite picking up 5 more wins than Hoppers, for an impressive 12 wins from 18 matches, Otley’s lack of bonus points (8 to Hoppers’ 18) means they are only separated by the afore mentioned 10 points.

One of Otley’s players to watch is hooker/back row Joe Graham who has featured in every game of the campaign scoring an impressive 6 tries in the process. Graham’s former clubs include Newcastle Falcons, Bath and Rotherham Titans. We’re sure Joe will be looking forward to locking horns with former Falcons teammate and now Hoppers centre James Fitzpatrick. 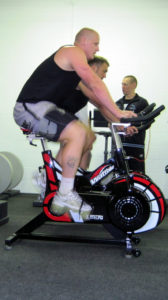 James Fitzpatrick and Joe Graham on the bikes whilst at Newcastle (credit: Wattbike)

Before relegation at the end of the 2010/11 season into National 2 North, Otley had lived in the upper levels of league rugby since gaining promotion at the end of the 1990/91 season from the Courage Division 4 North. When our two clubs met at Lightfoot Green that season, Hoppers came out on top by sixteen points to four. Hoppers and Otley next met in league action during our first season at Level 3 rugby in 1999/2000 when the Yorkshire side did the double over Hoppers. This was to be for just one year, with Otley gaining promotion once again.

The playing record between this week’s opponents goes way back to April 1929 when Otley played Hoppers whilst they were on an Easter tour. The home team ran out winners that day but suffered a comprehensive defeat the following season at Otley’s Cross Green ground against what was thought to be one of the strongest sides in Yorkshire.

There was then a considerable gap in time before the two clubs met again, but once that happened in 1961, games were played each season through into the “Leagues” period.

The records show that there have been forty-nine previous games played between the two clubs with this Saturday’s opponents holding a slender lead of just two victories plus one match being drawn ten points each back in the 1994/95 season and five others being cancelled. Amongst the games that have been played, League encounters number just fifteen with Otley on eight victories, one ahead of Hoppers.