The Club regret to announce the death on Wednesday 13 April 2022 of one of its great stalwarts, Jim “Fifi” Melrose.

While younger Hoppers may remember Jim as one of the “garrulous old farts” who populate the Club they might not appreciate his legacy. In the 70’s he was actively involved on the Committee and as a leader of what are now known as the Social Teams.

It was his professional expertise that helped change Bradley’s Duck Farm from the stinking quagmire we acquired in 1972/3 to the quality playing surfaces we enjoy today.

On the playing side he lead by example but also built the cultural side of the Club. He was instrumental in organising the first lower teams overseas tours to Narbonne in 1979 and 1980. He survived despite attempts to swap him for our opponent’s prop’s wife and what threatened to become a violent incident in the local bar when he was explaining to a young lady he wore a “jupe” at home (he thought it meant kilt) and her chap took exception. In 1981 despite breaking his leg in a match a week before departure he went on the Stroller’s inaugural tour to Amsterdam. For most of the time he was carried around by six pallbearers humming the Dead March from Saul but all thought it worthwhile to have him with us.

What he meant to us is best summed up by the thoughts of his two “oppo’s” as set out below.

Funeral arrangements will be announced as soon as available but in the meantime please remember and raise a glass to a true Hopper.

Well I still can’t get my head around the fact that my great mate, Fifi, has gone. At the end of last year and the start of this he was well. Anita & I had a meal at Sheila & Fifi’s on 30th December and 2 weeks later they were given a diagnosis of terminal untreatable cancer.

I was fortunate to be his mate for nearly 50 years, both of us having joined the Hoppers in 73/74 season. Of course he soon established himself as an important club member, being chairman of grounds and 4th team captain before moving on to captain the Strollers, the start of a memorable 25 years for us all.

How did he get from Edinburgh to Preston?

His rugby career followed the same path. First of all Edinburgh’s Broughton Club with whom we had some great matches and fun times, then Gosforth when he was in Newcastle and Lenzie Rugby Club when he was working in Cumbernauld.

He was also busy raising a family with his wife, Anne, his daughters Kirsten & Nikki who gave him 4 grandchildren, Emma & Rachel and Jordan & Maisie.

Eventually, he acquired another family with Sheila, a second Nikki, Jonathan, Claire and Rachel and 3 step grandchildren, Jessie & Matty and Freya.

You will all have your great memories of him; Anita & I certainly have, many a Saturday night out and dinner dances, going on lots of holidays with them in the British Isles as well as so many countries around the world even joining them on their honeymoon on an Arctic/Norwegian fjords cruise.

To me he is irreplaceable and I am sure that goes for everyone who knew him whether Strollers, Hoppers, other rugby men, fellow walkers who loved to pick his brains about all the flora they came across, many other friends and former colleagues.

Our deepest sympathy and condolences go to Sheila and family including the 3 men who became part of his life and great friends, Adrian, Ian & Dougie.

Farewell then, dear friend. What are we going to do without you? We will miss you so much but will never forget you.

In the last two years or so a number of my friends and acquaintances have died. It makes you realise that you’re not young anymore!

All those deaths have a big effect, but to hear that your best mate for 45 years or so has died is devastating. He and I spent so much time in each other’s company, putting the world to rights, discussing Scotland’s chances against England in the Six Nations, whether or not Old Fart’s Best Bitter was no.1 and what Hoppers needed to do to get promotion.

Jim and I spent most Friday nights discussing these important issues, at the same time as sampling a few bevvies, of course.

We just got on.

But most people “just got on” with Jim. He was so easy to “just get on” with, generous, empathetic and always had time for you.  He once took a few days off work to come with me to Huddersfield to help my daughter move house. It was typical of his generosity.

He rang me in early February to let me know of his diagnosis. So I went round to see him and we sat and talked for a couple of hours. He brought me up to date on his condition in the first few minutes and then asked me about how my family was. Typical.

He will leave a huge hole and I’ll never forget the old bugger!

Cheers Jim, life would have been poorer without you. 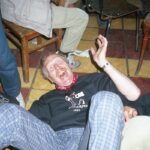