If anyone epitomises what is a Hopper it must be Les who has been associated with the Club for almost a third of its 150 year existence. During that time he has progressed from the Front Row, through refereeing to almost every conceivable “Admin” rôle.

Unfortunately we are not going to be able to celebrate his 95th this Saturday 16 May down at the Club as we did when we had “a right good shindig” for his 90th so the random notes below must serve as the Club’s tribute to him.

Dad moved from Hull to Preston in 1953. He played with Hull and East Riding long before their merger with Ionians. He began his administrative career with the Hull club, being Assistant Secretary for 2 years and then Secretary for 2 years. He then spent 12 months at Grimsby as player and Team Secretary.

The first person he met at Greavestown Lane was Pym Simons who was President. Apparently it only took him an hour to recruit Dad as Fixture Secretary, a post which he held for 31 years, gradually building up a list of fixtures against some of the more prestigious clubs in the North – no leagues in those days. George Thompson, another refugee from Yorkshire, joined the Club at the same time and have remained good friends ever since. Dad also found time to serve for a number of years on the Selection Committee. He was Club Chairman for 2 years and an active member of the New Grounds Committee which oversaw the move to Lightfoot Green.

Dad was very much involved in ensuring that the Club secured a place in the original Telegraph Northern Merit Tables in which we achieved sufficient success to put the Club in the Area North division of the Courage Leagues.

When Dad took early retirement from Barclays in 1982 he took over the role of Administration Officer. In 1984 he was also appointed Club Secretary. His last “official” post was that of President. 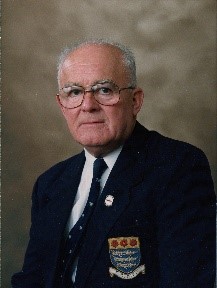 Dad spent most of his playing career at the Hoppers in the A team. When he finished playing he took up refereeing with the Manchester Society. Many teams incurred the wrath of his no nonsense approach to that role. Games which ended with 15 men on each side were the exception to the general rule. 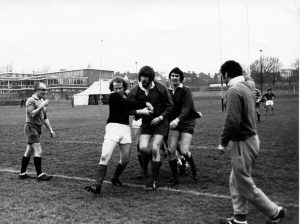 Dad was also a member of the Lancashire RFU Cup Committee for some 6 years, the last 2 as Chairman. In 1988 he was awarded his County Honours tie, quite an achievement for a Yorkshireman!

I started in the B (4th) team in September 1954 and finished the season in what we then called the A (2nds) playing with Les.  The last match was away at Kersal where our captain arranged a team photo which hung in the clubhouse long into the Lightfoot Green days.  As you will see from the picture he wasn’t the cleanest of individuals and it looks like his Mum hadn’t discovered Persil. 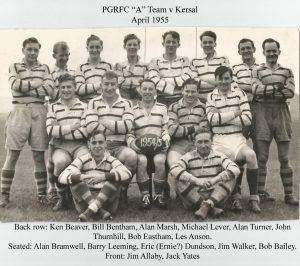 I recall that as hooker, he was reputed for his ankle tapping of his opposing number whilst ever the gentleman banker in Fishergate on weekdays.

Please remember me to Les with my heartiest congratulations. Unfortunately many of that side are no longer with us but Alan Marsh and Alan Bramwell were both at the Sesquicentenary Dinner. Happy days in a great club where I also did all the licensing work whilst Les was the admin officer. I wonder if he will recall the summoning to Fulwood police station with chairman, Harry Page, where the Chief Supt, Joe Wearden, gave us a benign admonishment?

Would you please pass on my warmest Birthday Greetings to Les, one of the all time great Rugby Men of my acquaintance. A 100% Hoppers man, a shrewd administrator with an acute sense of rugby purpose and a strong work ethic. He was an invaluable go-to man and whole hearted supporter of mine during my spell with the Club, which was without doubt one of my happiest times of my life in Rugby. God bless you Les- Dick G

I have this week had a lengthy and extremely pleasant telephone conversation with Les, rekindling our friendship which dates back some 50 years. We covered a lot of wonderful rugby ground and history with Les recalling with some relish many a tale of life on the rugby field. He particularly enjoyed our tale of us both being ordered ‘off the field of play’ during a game at the old Lea ground.  Les and I were leaning with our backs on the railings around the pitch and Les as usual was offering some advice to the referee who is this case was the amiable and extremely good Jack McCann.  Anyway after some time he had had enough, wandered over and issued his orders.  “Are you sure it was me sir’, asked Les.  “Of course” said Jack.  “Who else could it have been?’.  ‘Well someone in the crowd’ Les replied.  The ref turned around and nodded in the direction the crowd, all seven of them made up of Pym Simon, the president and his friends. “Who else could it have been”.  ’Now go and sit in the stand”. Now any of you Strollers old enough to remember will recall such an order was akin to being sent to any of the Russian gulags.  Rotting woodwork, abandoned stolen bikes, dog crap and anything else the local populace wanted to dump.  If the stench didn’t get you then the splinters would.  And so a miserable Les and an unhappy scribe sat in isolated silence, for me only broken when I had to go and telephone my running report to the late and much lamented Football Post. Stan Threlfall will probably recall the match, which I think was against Davenport. Afterwards all was sweetness and light, even though Les continued to press his point to Mr McCann over post match beers.  “Happy Days’ said Les.  Happy days indeed and even better that I was able to share so many with a man who has for so long been such a good friend.

Incidentally Les was on great form.  His conversation is a little slow, but his mind is razor sharp.  He laments that his eyesight is failing and is considering getting some talking books.  Perhaps some of you could help out.

In the meantime rest assured he is looking forward to his birthday and I can tell you my wife and I are sending a card as are Vale of Lune stalwarts Stuart Vernon and Fred Swarbrick.

Les was not particularly well known to the Strollers when he took up his rôle as Admin Officer so it was with some trepidation that Jim “Fifi” Melrose approached him to seek Club and RFU permission for a tour to Belgium. Gruffly from behind the habitual fog of pipe smoke Les informed Jim there would be a condition. Les insisted on coming with us. This met with some concern as to how he would fit in with our ways so it was determined we should meet him half way.

As a result when he turned up at our lunchtime pre tour meet at the Lane Ends every Stroller wore a flat cap and a pipe. Les didn’t turn a hair, probably assumed it was normal, gave it two “Yips” of approval and fitted in like he had always been there. Before the tour was out he was conducting the singing and in “Il Presidente” mode liaising with our hosts. He even stumped up his fines. 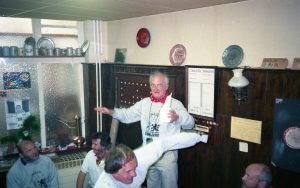 That tour did however see the birth of his doppelgänger and those who remember Les’s 90th bash will recall the doppelgänger’s speech. On the first occasion this happened Les was in full flow in the Gent Rugby Club bar standing on a table and responding on our behalf. Two Strollers lifted him up and carried him away as the doppelgänger took his place both physically and in mid-sentence. The real Les was reduced to a plaintive Yip. 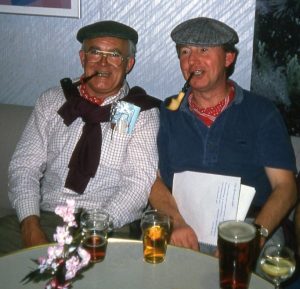 Les carried on touring with us for many years and was always a great Tourist.

Finally when we have just marked VE day it would be remiss not to note that Les was of the generation that served in WWII. In Les’s case he was in the RAF and here he is newly joined up. 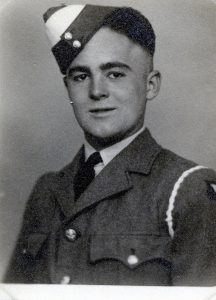 And here in New York at the end of the war. 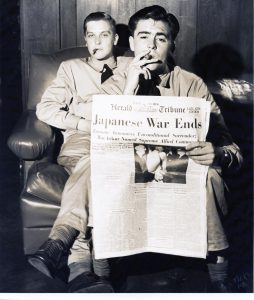 So Happy Birthday Les from all at Hoppers and we are looking forward to your 100th down at the Club.