Les’s funeral will be at St. John Baptist Church, Broughton on Wednesday 14 July 2021 at 11.30am, followed by a private service at Preston Crematorium at 1.00pm. Current social distancing requirements dictate that attendance at the funeral service is restricted and all persons attending must wear face masks. There will be an official party representing the Club in the Church and if there are any spare places on the day additional mourners will be admitted. However the family have requested that anyone wishing to pay their last respects line Church Lane outside the church prior to the service. It has been suggested that gentlemen wear Club ties to mark Les’s association with the Hoppers.

There will be an opportunity to remember Les at the Club after the service. Les’s family will be coming on after the crematorium. There is no need to book for this but some tables (either inside or outside dependent on the weather) will be reserved for family.

The obituary below has been written by Les’s son Michael.

Les was born in Hull in 1925. King George V was on the throne, Stanley Baldwin was Prime Minister and women under the age of 30 had not yet been enfranchised. His father, John (Jack), who had served with distinction in the trenches with the 11th Battalion of the East Yorkshire Regiment during the First World War, for which he was awarded the Military Medal and the Belgian Croix de Guerre, was a grocer’s manager. His mother, Louisa, was a draper.

Les spent his childhood in Hull. He had a sister, Joan, 8 years younger, who died coincidentally on 1 April 2021. He attended a local Primary School before attaining a place at Hull Grammar School, where he played soccer and cricket. Many nights during his teenage years were spent in the Anderson shelter in the back garden of the family home whilst in the skies overhead the bombers of the German Luftwaffe targetted the Humberside docks and factories.

Les joined the City of Hull Air Training Corps at the age of 16. In 1943, as a Freshman at King’s College, he joined the Cambridge University Air Squadron. A year later he enlisted for the Royal Air Force Volunteer Reserve but he did not experience active war service. Photographic evidence testifies that he celebrated VJ Day on 15 August 1945 in New York, en route to a training camp in Canada. The training was cancelled. The RAFVR returned to the UK on The RMS Queen Mary. 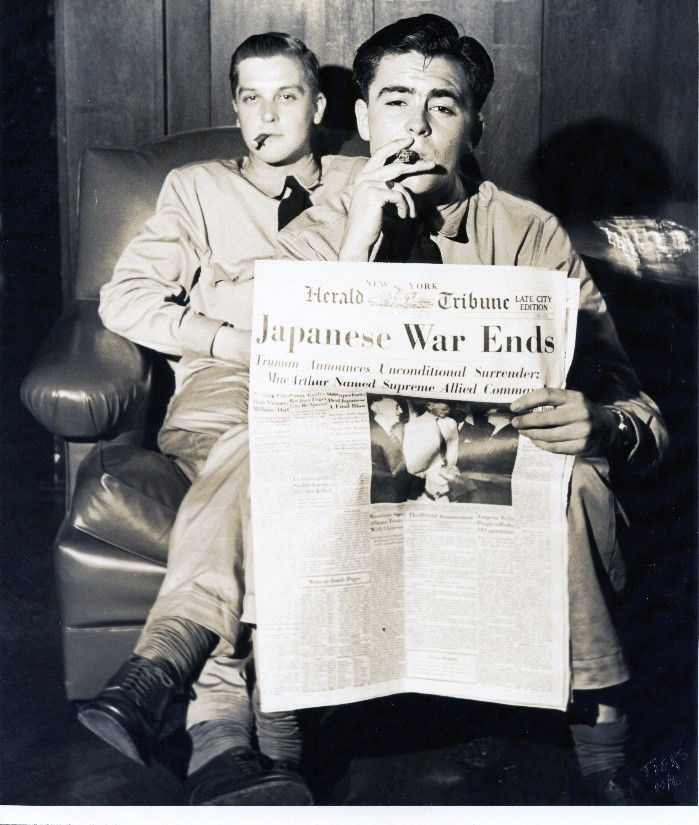 Les in New York at end of WWII

Upon his discharge from the RAF in 1947 Les took up employment with Barclays Bank first in Hull and then in Grimsby. His lifelong passion for rugby union was kindled when a work colleague enquired if he would be willing to make up the numbers for one of the Hull & East Riding teams the following day. He was invited to play again the following week! His playing career, eventually as an uncompromising hooker, steadily progressed through the ranks to the First XV. He was appointed Assistant Secretary of the club, a position he held for 2 years, and then Secretary for a further 2 years. He then spent 12 months at Grimsby RUFC as player and Team Secretary. He also played regularly for the Barclays Bank Country Branches XV.

Les married Norma in 1953 and moved across the Pennines to take up residence in her family home in Broughton.

When Les moved to Preston he made an early visit to the local rugby club in Lea. The first person he met at Greavestown Lane was Pym Simons who was then President and general recruiting officer.  After a brief conversation Pym invited Les to take on the role of Fixture Secretary, a post which he held for 31 years, gradually building up a list of fixtures against some of the more prestigious clubs in the North. There were no leagues in those days. George Thompson, another refugee from Yorkshire, joined the club at the same time. They remained good friends ever since. 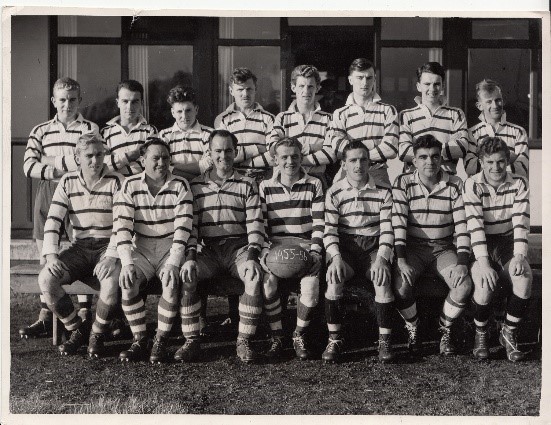 Les spent most of his playing career at the Hoppers in the A team. He also found time to serve for a number of years on the Selection Committee. He was club Chairman for 2 years and an active member of the New Grounds Committee which oversaw the move to Lightfoot Green.

He was instrumental in ensuring that the club secured a place in the original Telegraph Northern Merit Tables in which it achieved sufficient success to secure a place in the Area North division of the Courage Leagues.

Having hung up his playing boots Les took up refereeing with the Manchester Society, eventually officiating at First and Second team level throughout the North West. Countless players faced the consequences of his no nonsense approach to that role. 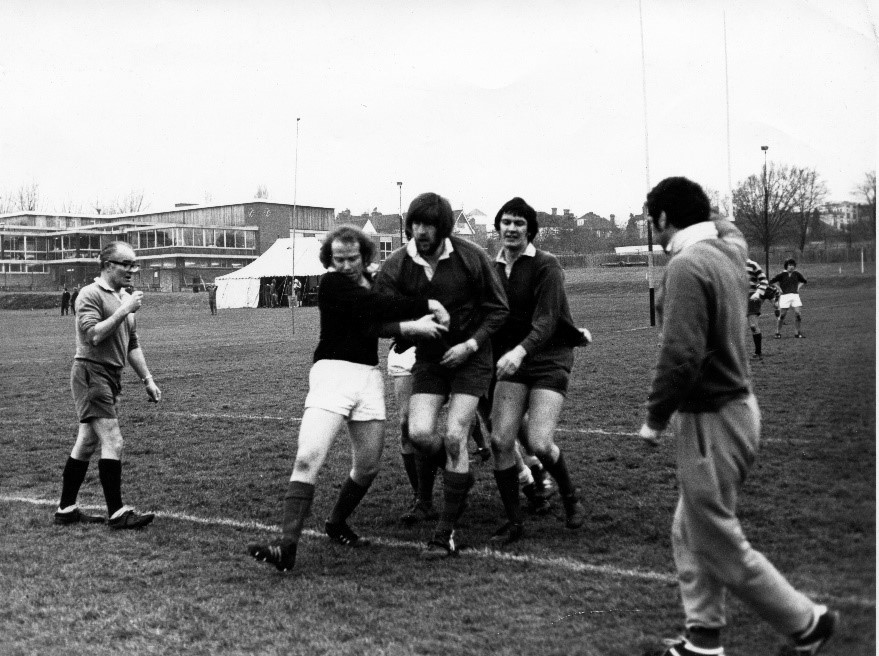 When Les took early retirement from Barclays in 1982 he became the Club’s first Administration Officer. In 1984 he was also appointed club Secretary.

Les was a member of the Lancashire RFU Cup Committee for some 6 years, the last 2 as Chairman. In 1988 he was awarded his County Honours tie, quite an achievement for a Yorkshireman!

Les was the archetypal club man. He was a regular participant in the Strollers’ tours, acquiring the sobriquet of “El Presidente”. He also appeared in several club pantomimes, invariably transposing roles with his doppelgänger, Michael Waller. 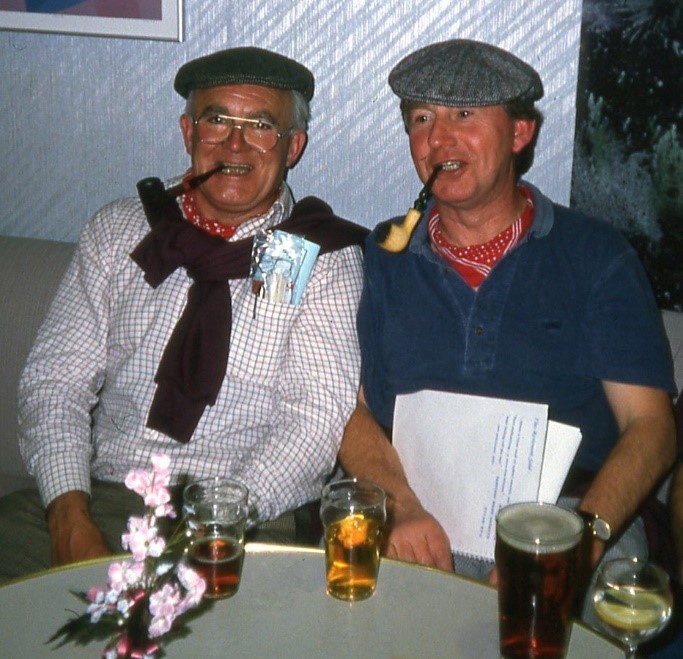 Les and Mick on Strollers Tour

He felt privileged to serve as President of the Club and to be elected as an Honorary Life Member.

During the latter years of his life, when he was living in a care home, Les continued to follow the fortunes of the Hoppers with avid interest. He would often be seen watching games from the car at the north end of the ground and, even when his mobility diminished, he would insist upon being telephoned to receive regular score updates throughout the games.