After another two week rest period Hoppers are set to play yet another crucial game this Saturday when they travel Lymm who are currently lying in fourth place, Five points behind second placed Hull and twenty points adrift of Hoppers.

Hull’s victory at Kirkby Lonsdale last Saturday in their catch up fixture moved them into second place and now just three five point victories behind Hoppers with all the top four contenders for promotion having just five games each remaining.

It looks like Lymm will have to beat Hoppers to have any chance of gaining promotion in one form or another this season whilst the visitors will be anxious to keep up their momentum in their drive for promotion at the first attempt.

Victory over then second placed Harrogate in Hoppers last outing was looking a comfortable one up until the final few minutes when an obvious knock-on caught the combined official’s blind spots flustering the home side and giving the visitors momentum to grab a valuable losing bonus point which had looked well beyond their reach up and until that turning point.

Our hosts this Saturday can boast a comfortable victory over Pocklington on the same day as Hoppers defeat of Harrogate at a venue their opponents this week struggled to overcome just a few weeks previous.

The Cheshire side have the meanest defence in the Northern Premier League as things stand averaging just eleven points a game, but conversely have the lowest points total from the top five in the league scoring on average twenty five points per game.

Our records show just three meetings between the two clubs, the first back on the 19th of February 1983 when Lymm gave Hoppers a fixture after Solihull couldn’t fulfil the scheduled one. The Cheshire side won that first game on home soil by twenty points to Hoppers fifteen, only for the visitors to gain revenge twenty years ago on the 6th of December 1997 at the same venue when they were victorious by thirty nine points to seventeen. The league game earlier this season provided Preston Grasshoppers a six point victory in a tight game where both sides went into the game with an unbeaten record.

HERE’S THE LINE UP 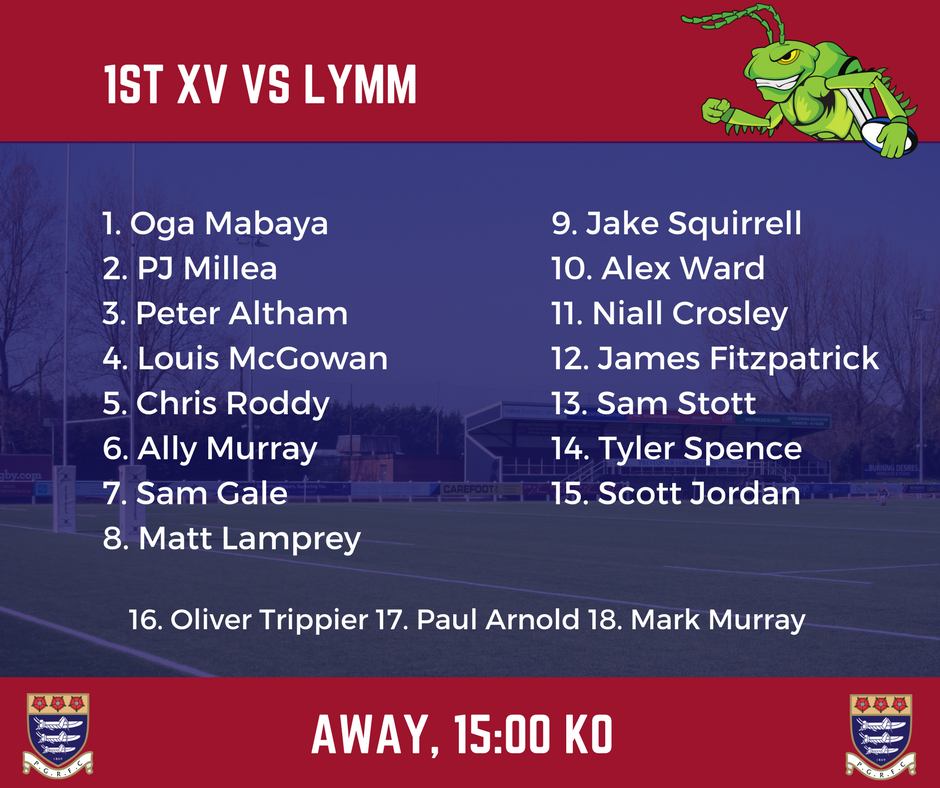 After an enforced absence, Sam Gale eventually made his fiftieth appearance for Hoppers, coming off the bench in the game against Harrogate in a run of games which started back in 2015 and during which time he’s scored fourteen valuable tries for his club. Well done Sam!

Someone approaching that figure is Chris Roddy whose record to date stands at forty nine since he joined Hoppers from Stourbridge from which he’s crossed the whitewash some nine times. Congratulations Chris and well done in your continued appearances for the British Police Rugby Union side!

Preston Grasshoppers had a player starting in the 1st XV for the first time in the game against Harrogate, Well done to Rob Meadows!

Achievement of the week in our last outing has to go to Matt Lamprey whose two tries in the Harrogate game put him on twenty seven for the season, equalling Michael Lough’s long standing club League try scoring record from the 1998/99 season. ‘Luffy’ will be quick to point out that his record was in a league level above our current one but Matt can retort, he scored his haul from just twenty one games against the twenty five it took ‘The Aussie’!

Michael ended up scoring twenty nine tries that season from twenty eight outings whilst Iain Bruce, the other try scoring machine that season crossed the line a total of twenty seven times and just two less in League outings. We shouldn’t forget Gary Monaghans’s record that season either. He scored seventeen league and twenty tries in all games.