Following my appointment at the recent AGM I thought it would be useful to let members know who I am, why you are faced with me as Chairman and to let you have a few musings on where we are at the Club in response to debate at the AGM.

My Involvement with the Hoppers

I first played Rugby for the Hoppers in 1973 and retired from playing with the Strollers in 2005. In between I played for every male adult team from the 1st’s to the 6th’s in a variety of positions. I was also a squash player from its commencement at the Club until 1994 and organised our summer league teams for a number of years. While I haven’t participated at the Hoppers in our other sports I do have an empathy with them having been at various times an Archer, Shooter, Cricketer and Cyclist.

In more recent times I have been a volunteer which has included being Treasurer for the last seven years. As this isn’t a particularly “front of house rôle” many of you would no doubt not recognise me so to help recognise me this is me as The Narrator in this year’s pantomime. 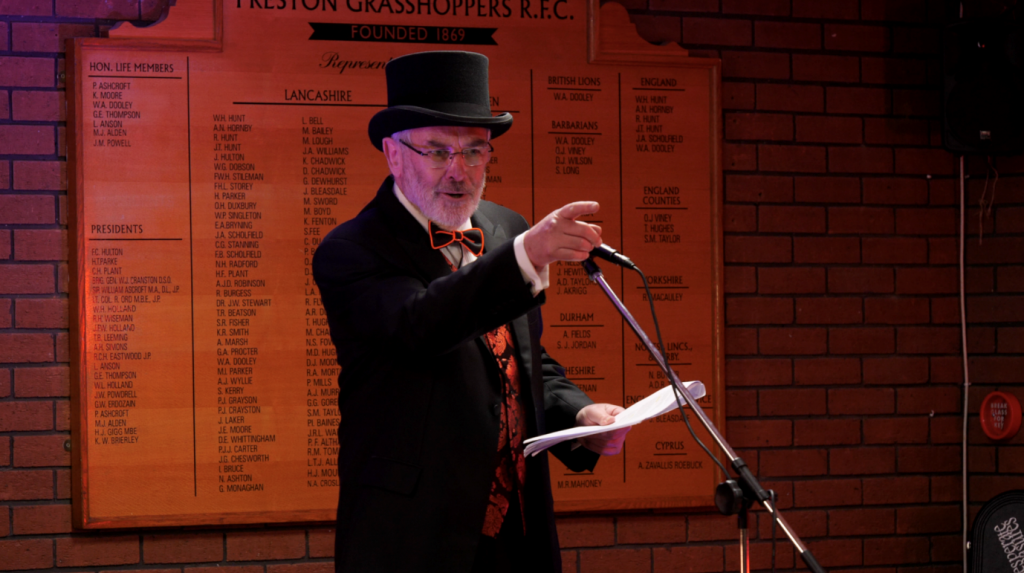 I hope my performance in the Chairman rôle doesn’t attract quite as many (pantomime?) boos.

I also have a family involvement with the Hoppers as both my late father and eldest son, until injury, played for the Club.

How have I become Chairman?

George Erdozain stepped down at the start of 2020 after twelve very successful years as Chairman which is more than you can expect anyone to serve and he had been keen to hand over to new blood for some time but no one could be identified. As a temporary expedient I doubled up as Acting Chairman and Treasurer but was very relieved when Andy Donovan stepped up to the mark. He served with notable energy and leadership that saw us weathering the initial trauma of the Covid-19 crisis. Unfortunately he has decided that he wasn’t enjoying the position so stepped down just as we were preparing for the AGM. I am very pleased that Andy continues to be involved with the Club and has volunteered to help in any way he can short of being Chairman. He has already been very supportive to me.

I would stress that I do not see myself emulating George’s period in office and will gladly step down as soon as a more suitable candidate emerges. In any case I believe a maximum term of three years which will give the Management Committee a chance to identify succession, is sensible.

Present Position of the Club

Like almost every other entity in these strange Covid-19 times we are facing great uncertainty.

Our commercial activities had ceased and while we are now open under Covid-19 regulations for food and drink our function activities are not currently permitted. The food and drink offering is profitable but the profit is less than the overheads of the Club which continue despite Covid-19. There is an ever present danger that even the limited offering could be impacted by local lockdowns or changes in Government policy.

Archery and Cycling have started up several weeks ago, suitably socially distanced, and a truncated Cricket season has commenced. Squash and Shooting are hoping to start up soon. Limited Rugby training has commenced but it is far from clear when proper games will be playable again and this drives a significant portion of our income.

Our Contingency Planning for this led to restructuring our staffing onto a far leaner basis and we have taken full advantage of the furlough scheme. As we return to greater activity levels we might need to take on additional resource but this will only be done when justified.

We always rely on volunteers as a Club but many have stood up to be counted over the past months and in particular without Richard Ellis leading Project re-Start we would not be in the relatively good position we are now.

Almost inevitably the bias on the Management Committee is to elder retired members as they are the ones who have the time to devote to the Club and in some cases this is considerable. We are, however, very aware of the need to widen our base and this has led to three members joining us this year in Emma Pooley, Neil Ashton and John Potter. A cohort now reinforced by Paul Carroll.

Management Committee is not a closed shop and anyone who is interested in getting involved is welcome to have an informal chat with me or any Committee Member.

Looking forward the management of the Club will need to evolve both in how the Management Committee functions and how we employ staff. A working party model, similar to that which put together the recent submission to the RFU on league structures and salary caps, may well be the way forward where Management Committee effectively delegate their responsibility on specific matters. Neil Ashton’s review into the Clubs Vision and Ethos is another example of this and what it has to say should help stimulate debate about our management of the Club.

As a rugby club we are in many ways defined by the success of our first team but we need to recognise that that is not the be all and end all. Enjoyment and participation in Rugby by as many Men, Ladies, Minis and Juniors as possible is also vital.

This has to be achieved alongside keeping the Club profitable and viable if we are to see another 150 years of Hoppers Rugby.

The balancing act of committing resources to these competing requirements will inevitably not satisfy everyone.

For the second time in three years the Club has dropped from Level 4 to Level 5 in the National Rugby pyramid. It is our ambition to return to Level 4 immediately and prior to the Covid-19 crisis we committed to a budget for the season 2020-21. This budget was inevitably lower than the previous season recognising both the lower “player payment threshold” at Level 5 and the Club’s financial position. It was felt to provide adequate resources to challenge strongly for a return to Level 4.

Since setting the budget the waters have been muddied both by Covid-19 and the on-going review of the National League structures. The latter is likely to lead to a new model with more teams at a regionalised Level 4 and Level 5 providing local opposition rather than regional. Members should be aware of the exemplary work that has been done to influence the debate around the new model which has led to mentions of Preston Grasshoppers in the National Press and a direct Zoom call with the CEO of the RFU and the chief movers and shakers in the debate. It is still presumed the new structure will be in place for Season 2021-22 but this is not certain and there is no firm guidance as to how relegation and promotion between Levels 4 and 5 will be handled. This is not surprising as we do not know yet how much Rugby, if any, will be played in 2020-21.

Nonetheless the Rugby budget has been maintained at its pre Covid-19 level and recruitment has been carried out on this basis. While elements of this budget will reduce pro-rata if, as is likely, a full season is not played other elements are not match dependent.

I hope you have found the above useful. As a first communication it is longer than I would intend future efforts to be. My aim is to provide some sort of musing at least once a month or more frequently if there is something to report.

Your ideas about the future of the Club are always welcome and as Chairman I do not view myself as dictating which way the Club goes but rather as a channel for others’ ideas which can be thrown into the mix and used to create a consensus as to the best way forward.

I would however ask that we all try and accentuate the positive. Yes there are things that go wrong which need picking up on but we are all volunteers and nothing will destroy the enthusiasm of our volunteers more than a rant which gives the impression that the volunteer is absolutely useless. We have lost good people in the past from over aggressive criticism.

I can be contacted at: chairman@pgrfc.co.uk

The Hoppers is a great Club with a great future. Let’s all enjoy ourselves in securing that future.