The Club is sad to announce the death of former long-time player Norman Hodgson. 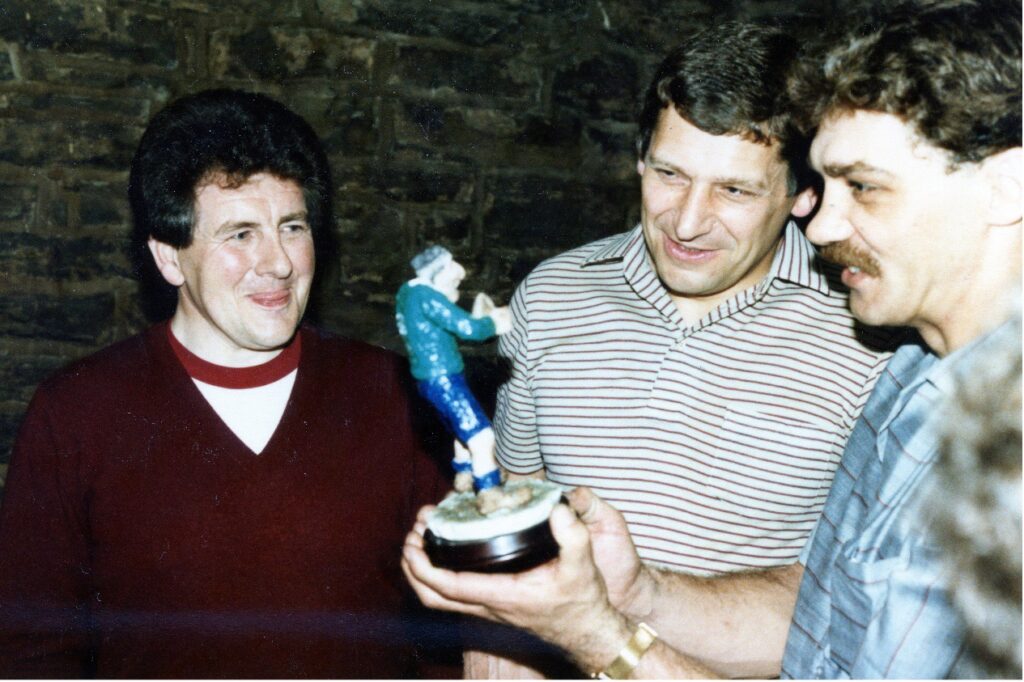 Norman was a pupil at Hutton GS and played his rugby at both Lea and Lightfoot Green. He extended his playing career into his forties and was a stalwart of the Strollers’ early years. A man of strong faith he stood out as a teetotaller following his Methodist beliefs but was tolerant of his boozy colleagues and contributed fully to any party. In tribute his Stroller sweat shirt was specially adapted and the pint mug the carton Hopper sported carefully embroidered orange to reflect his usual tipple.

The note below is taken from the LEP notice

Devoted husband to Anne. Dearly loved father to Mark and Paul, and father-in-law to Lindsay and Claire.

Family flowers only please. Donations, if so desired, will be gratefully received for The Alzheimer’s Society. Loved and cherished by all who knew him.

The Club offers its condolences to all the family.

The note below is Duncan Turner’s reminiscence of Norman.

My early memories of Moggy are my astonishment at finding that he didn’t drink ‘intoxicating beverages’. As a young (16 years old) member of Geoege Thompson’s B team – 4th team we were usually on the same bus as the A team and whenever we stopped enroute back to Preston at a pub for more drinks he would always stay in the coach and read a book. He never grumbled or showed any disappointment at these sometimes long delays in the journey home and like many others we respected and admired him for this.  Another player who adopted this approach was Keith Smith, the brilliant winger who topped the scoring list every season both with tries and kicks.

My other memory of Moggy is that he frequently cycled to Gisburn after a match to visit his girl friend. It’s a 35 minute drive by car so how long it took on a bike, after a game, is a mystery. Of course it was not one of these present super light jobs but a simple ‘racer’ with drop handlebars and three gears. It would take him at least 2 hours I suppose.

So he played for various teams over a period of at least thirty five years and had just an occasional game in the 1st team. He quite simply liked playing rugby. No one could, or would, speak badly of him. He was a real Christian of the Methodist variety and I ‘m sure all those who knew will think fondly of him.

My first game of rugby ever was played in the A team on 15th February 1956 and he may well have played in that team, which of course included Les Anson and many other guys I remember fondly. It was another two years before my next game in the A team when I was promoted from the B team, off the bus, at St Mary’s Old Boys, Crosby. I know he was playing that day, as a back row, with Bob Bailey playing at scrum half.