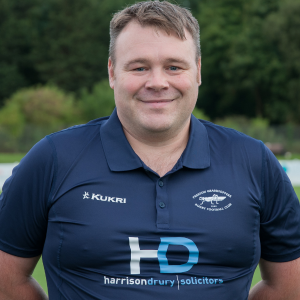 It’s been a long, long time since we sat down and talked about any rugby. Everybody is looking forward to the new season so, what are your thoughts on where we are and what we’re going to do?

Yes, it has been a long time and I suppose that the perspective now is making sure we prepare properly for the season and we now have the ‘green light’ for full contact training which we’ve been waiting for because we have been limited in what we can do, not being able to do scrums and mauls and all that kind of thing so now we can really crack on and start to get some structure into what we’re doing. We’ve really had to be patient but now it’s about getting everybody switched on being mindful that the season is going to happen and preparing and building, and getting everybody on the same page.

We have a lot of new faces both on and off the field so we have to get everybody very quickly established, feeling comfortable around being part of the Club and then getting them to deliver on the things we believe they can bring to the Club.

Speaking of new faces, I’ve just been talking to Byron, and we know that it’s a massive bonus to have someone like him to come in and get our lads going. Last week when I spoke to several of the players, every one of them spoke about how much energy he’s put into what we’re doing and they can see what’s happening.

I think that over my time as a Director of Rugby, when we have done well as a club or had really good periods it’s because we’ve had a professional input coming from the coaching staff, with an individual who is very closely involved in the professional game. Obviously Byron ticks that box, he’s currently a professional player, he’s playing at the highest level in international rugby and speaking to him before anything was agreed, it was very evident that he has big ambitions to bring his coaching career to a place where he can continue doing it if he finishes playing in the next few years.

That was a really good fit for us. He’s been doing a little work with more junior clubs and it was also a good fit for him at this time and I honestly think that, as the lads have said, the impact he’s made is great, he expects really high standards, and the lads are not left in two minds as to what’s required.

He’s got really clear ideas as to how he wants us to play the game, but not just trying to force a style on the squad, he recognises what our strengths are and what we can bring to the field and therefore his approach is going to be around that so at the moment there’s lots of positivity, lots of energy, lots of clever training sessions which the lads are really enjoying and I think that Byron’s really enthused by what he’s seen and what we’ve delivered so far and he’s really keen to push on and see how far we can take this group of players.

Can you give us your take on this idea of ‘The First Team Brand’?

Yes, that’s an interesting one because it’s part of the debrief Arnie and myself had after the last playing season. One of the things we identified was that were we getting enough from the players regarding their roles within the club? Were they doing enough in terms of taking ownership of the squad and the playing side of things or were we being too proscriptive with myself and Arnie and the other coaches doing too much for the players?

So we coined this phrase, ‘The First Team Brand’.

What is it you (the Squad) actually want to be seen as?

What do you want the club and the supporters, the mini and youth teams, your family and sponsors, whoever it is, whoever engages with Preston Grasshoppers, to see?

You are the flagship team and whatever you do sets the tone, sets the standard for everybody else. Are we happy with what we think people would say about us now if we asked them?

There was a collective, – ‘Well, probably not’ so we put it to the players and said, ‘Right, what are we going to do about it?’ What do you want people to perceive you as?

Now we’ve set up a leadership group and given that group a really strong brief around taking ownership of the squad as a whole and so, if any issues develop within the squad, instead of us or Arnie dealing with them it’s over to the leadership group to deal with it with the players because we’ve said to them that it’s not just about the leadership guys deciding everything, it’s about everybody contributing.

Everybody gets the same share in the group, they have the opportunity to speak their minds, we’ve spoken about making people feel more comfortable about speaking their mind and we hope that it will engender two things really, that’s a better leadership culture within the group as a whole and also a better feeling for the Club from the players because I think that, from my perspective, I’ve probably been guilty of focussing too much on the rugby and not enough on giving them a really good rugby experience so that they can perceive what the wider part of the club is about and I’m keen that they do that.

That’s really interesting because when I spoke to Ally, I asked him if he felt there had been a detachment between the First Team Squad and the rest of the Club and he said he thought there had been in the past and what he wants to see is everybody who is in any team and in any part of the Club to feel that they are all in the same place.

Moving on with that idea, do you think that this going to provide a clearer pathway for youngsters coming through the Club to see that there is a chance to get into the First Team Squad?

Yes, I think so. I’ve talked quite extensively to various parts of the Club about my views on this and let’s pare it right back, the game went professional in 1995 and if we looked at Hoppers as a club right up to that point we were what I’d call a ‘Ninety-to-Ten’ club because ninety percent of our players came through the mini and youth or the senior rugby section and ten percent were people who had perhaps moved to the area or came from more junior clubs and wanted to play at a higher level. I think what happened as a result of professionalism was that over time we started to go in the other direction. I don’t mean that we have quite got to ‘Ten-Ninety’ yet but obviously we have got to point where quite a lot of our team is from outside the Club so what I’m looking for is probably a fairer balance.

I’d like to think that players in our mini and youth teams see the First Team as being where they want to get to. I’ve taken over the running of the Colts and have been working during lockdown, starting to get that a bit more reliant on what we do in the First Team so it’s going to take time to do that but, fundamentally, what we need to do is to leverage on our strengths and our greatest strength is, clearly, that we have the biggest mini and youth section in the north west, perhaps in the north as a whole, we’ve got the biggest senior rugby section anywhere in the north as far as I can see and from my perspective as DoR, perhaps being a bit greedy, I want everything to contribute towards pushing players towards the First Team Squad.

If there are players playing third or fourth team rugby, or who are, perhaps, late to the game, players who have not really committed themselves in the past but have got talent, I want them to think, ‘Yes, I can step up and play and be given that opportunity.

It’s never been a situation that it’s been a closed shop, I think it’s more a case that rugby has become quite polarised between semi-professional guys and others that are more amateur in their approach and I think we’re not the only club that has fallen betwixt and between that at times but what I do say is that the stronger we make these pathways into our senior squad, the more identity we are going to have and more home-grown players will buy into it and that will feed the next generation of players. We’re going to have that ‘tighter feel’ around the Club and, yes, Ally’s right, when we are in the bar afterwards we’d be a bit more representative of the Club as a whole and we’ll see that coming together but it is difficult, we’re a big club and we have challenges that smaller clubs don’t have, you try and get a hundred and fifty players to have a beer together – that’s not a social, it’s an event!

Interview conducted and written up by John Le Page