PGRFC is delighted to announce the appointments of Joel Unsworth (Head) and Dan Orwin (Assistant) to lead the 1st XV Senior Squad coaching for the 2022/23 season.

Both bring a wide range of varied experience to their roles and are highly qualified coaches being RFU Level 3 award holders. Joel joins Hoppers after a spell as Head Coach at Vale of Lune RUFC whilst Dan also comes from a Head Coach role at Fleetwood RUFC. 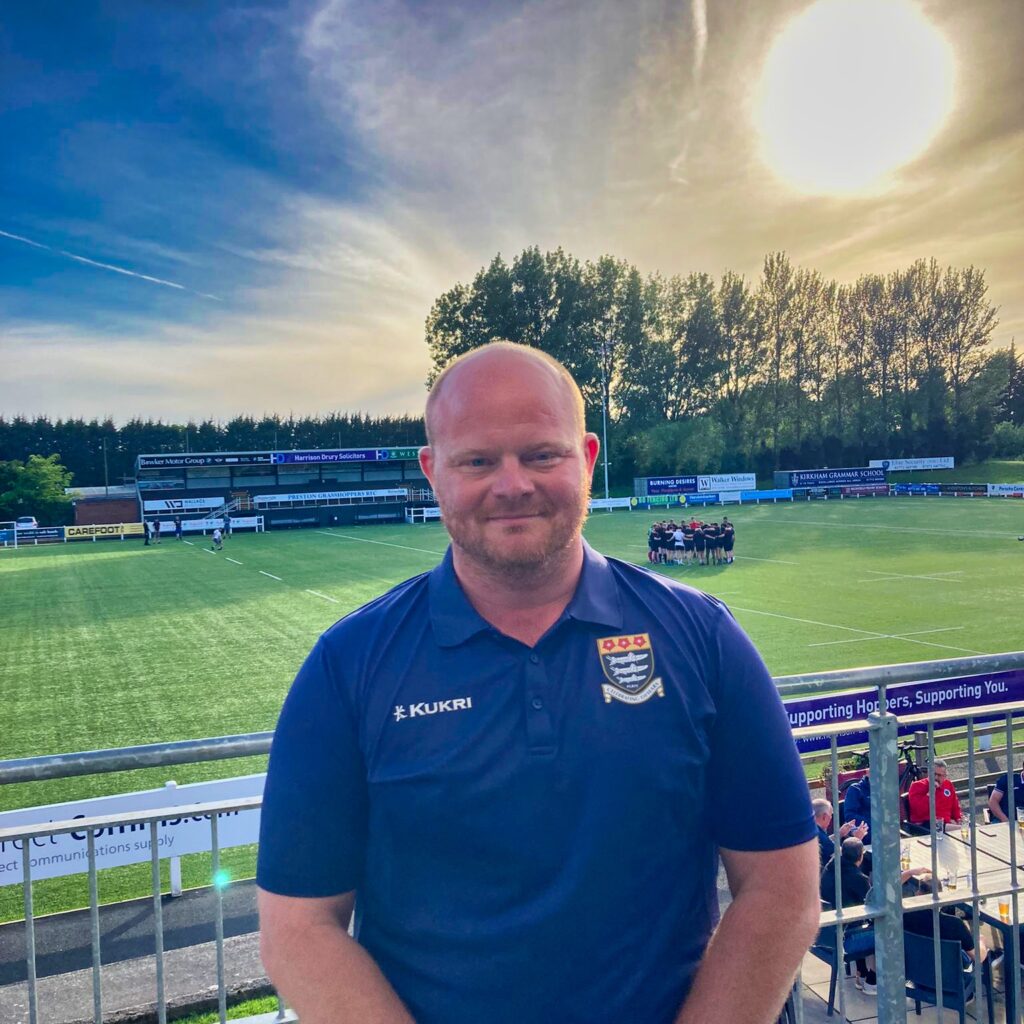 Joel Unsworth will take the Head Coach role and brings experience from a background of club, schools and junior England pathways. He was previously Director of Rugby at St. Josephs College in Ipswich and is now part of the rugby set up at Kirkham Grammar School where he is also a teacher. Aside from his time at Vale of Lune he has also coached club rugby at Sandbach RUFC. As a player he represented Hartpury College as part of his time with the Gloucester Academy.

On coming to Preston Grasshoppers as Head Coach he said “I am absolutely delighted to be joining Hoppers. This is a big club that is rich in heritage and a proven place where players of all abilities, backgrounds and genders come to enjoy their rugby. Following Paul Arnold is going to be big shoes to fill, but having spoken to (Director of Rugby) Gareth Dyer and other people around the club, there is a genuine energy and excitement having been promoted back to National 2. An opportunity and a challenge that we are all keen to grasp and enjoy.”

He continued “There are a lot of talented players within the minis and juniors and this should form the base for all our teams. The creation of a positive environment with a good transition of these players coupled with those who join us from different rugby backgrounds is going to be crucial if we are going to have success on the pitch and a happy environment off it.”

On how he sees the season ahead he added, “I am really looking forward to working with Dan Orwin and the other members of the coaching team together the current group of talented players. Together we want to create an environment where players bring the right emotion and passion to every game, as well as playing with style where they do not feel restricted by ‘the system’. A game with principles of ball movement where players can make decisions based on what they see and feel, not on what the structure says. This is crucial if we are to produce intelligent rugby players that can navigate themselves through different situations to get the best possible outcomes.” 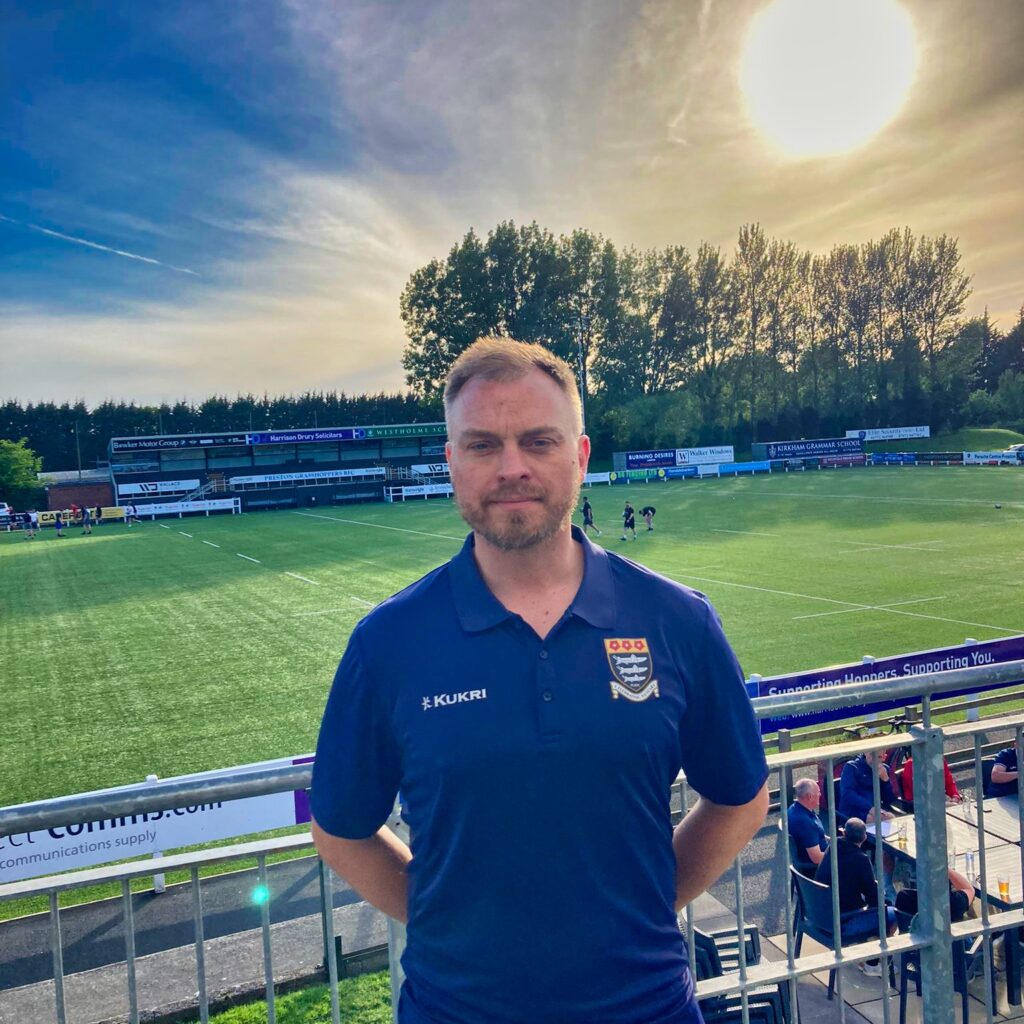 Dan Orwin has extensive experience as a rugby coach. Currently involved in the North of England U18 coaching team, he has been the lead coach at Fleetwood RUFC for the past two seasons.

Previously, Dan spent six years at Myerscough College where he coached the RFU Sale Sharks AASE Academy players and headed up the academy’s strength and conditioning provision. He has coached at Fylde RUFC (both in National League 1 & 2), where he was involved initially as lead coach for the Fylde Hawks and latter as an Assistant 1st Team Coach. He has also held the Lead Coach role for the Lancashire U17 and U18 squads.

In addition to his coaching experience Dan is involved in coach education. He is employed by England Rugby on a casual basis as a Coach Developer, and Level 3 Coach Mentor. A former secondary physical education teacher his current day job is as a lecturer in Sport and Physical Education at the University of Central Lancashire. Dan holds a BSc in Sport and Exercise Science, an MSc in Strength and Conditioning and is currently reading for a PhD in the coaching of game intelligence in age-grade elite rugby.

On joining Hoppers Dan said; “I’m absolutely delighted to be joining Hoppers. Through my various rugby roles over the years I feel like I already have lots of connection to the club and to many of the players. Hoppers is a prestigious club with a very long and proud history, and I hope to be able to help add value to the club. Since mid-March, I have been speaking with (Director of Rugby) Gareth Dyer and the club’s sense of purpose, aspiration and ambition really appealed to me. Having been promoted from the Northern Premier Division this season under Arnie, the club has a real buzz about it. I’m looking forward to working with Joel (Unsworth) and with the Hoppers’ players and staff, to see what we can achieve!”

Director of Rugby Gareth Dyer said “Firstly I want to welcome both Joel and Dan to Lightfoot Green. I know they will be made welcome by the Hoppers family and given everyone’s full support. They are two impressive guys who are clearly ambitious and have a track record of working hard”.

Dyer outlined how the club had recruited Joel and Dan.

“The recruitment process has been quite specific and we’ve gone about this in a targeted way. After a period of assessment which involved the input of our senior players, we identified the type of coach we were looking for. From that point it has been a case of then speaking to those we felt met that brief rather than a general approach to see whom might be available.

We wanted highly qualified coaches with a breadth of experience who could build on the work done by Paul Arnold and really develop the talented group of players we have at the club. Joel and Dan were coaches we identified from the start as fitting this brief and they have been in the mix throughout the process. We have taken our time and been thorough in our evaluation but also kept the short list quite tight throughout”.

“Joel and Dan have developed their experience across a range of pathways and are ready to take on a role like Hoppers. I really like how they go about their business and strategically they are good fit for the club given their links into schools and representative pathways. They get what Hoppers is as a club and how we can develop the “Hoppers Way” we are working on. They are both player centric coaches and I think they will both add hugely to the club”.

Dyer also confirmed that the club hopes to appoint a third individual to the set up in the coming days. “The process was always about bringing in three people so that we had a breadth of skills and experience. We already have Jamie Bantleman, Mark Murray and Steve Tiernan involved with the Senior Squad and they will continue to be integral to everything we do. But the demands at this level go up year on year and so it is important we have a group of coaches who can support each other and be able to manage a squad of 40+ players throughout a long season. We are close to finalising that appointment also and an announcement will be made in due course”.

Welcome to Hoppers Joel and Dan!