I’m very pleased to report a recent meeting with Mrs Liz Hedley whose family, and in particular brother Bill have kindly gifted Preston Grasshoppers an inscribed silver cigarette casket for display as part of our forthcoming 150thAnniversary celebrations. It is their wish that it will remain with the club as a fitting tribute to a long serving President of the club.

The history of this item is that on the 6thof April 1949 it was presented to their Grandfather Sir William Fawall Ascroft M.A., D.L., J.P. at the Lea Ground Clubhouse in honour of his twenty one years service as President. Amongst his response to the presentation Sir William called for a rebirth of the spirit and interest in a game in which a man could say: “that’s my ear, take your foot out of it – and be in complete harmony and fellowship after the fray”. 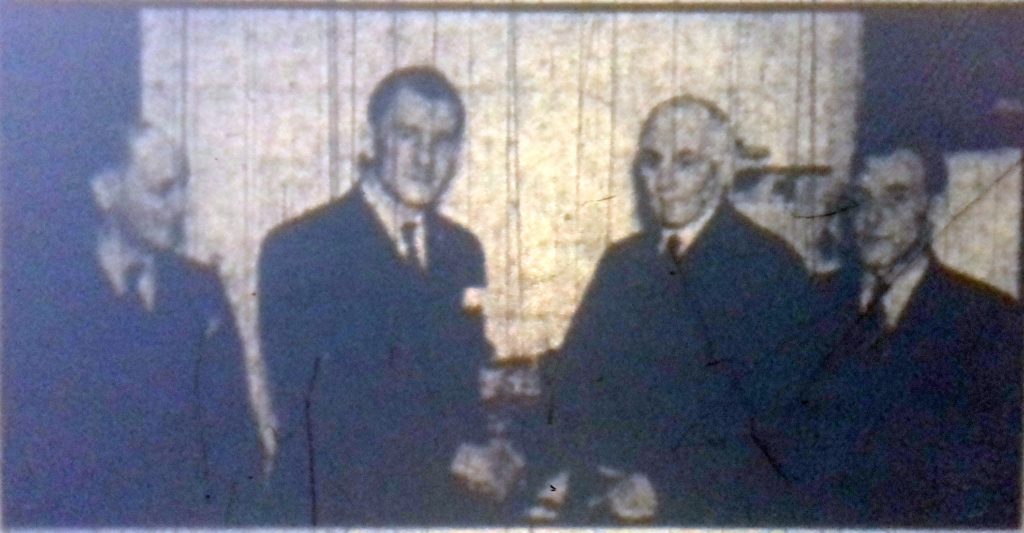 Sir William was a pupil of the famous Rugby School and his uncle Alfred, one of Preston Grasshoppers first committee members back in 1869.

At the same occasion Lady Ascroft presented the club with a new flag as the original on had been destroyed in the Town Hall fire. It had been taken to the Town Hall for a dance and was in that building two years previously when it was burned down.

It is our intention that the cigarette box will be put on show at The Harris Museum as part of our historical display during 2019-2020. May I take this opportunity to put a call out there to our members for any items of historical interest that they may possess and wish to be considered for inclusion in the display.

Along with the silver casket, the family have donated a scrapbook they owned which belonged to Roy Furness whom along with Sir William were the main instigators of the clubs re-formation on the 28thof February 1900. The scrapbook contains many newspaper cuttings from around this time, a number of fixture booklets together with a Preston Grasshoppers Members Rule Book.

Although Grandson William J. A. Ascroft-Leigh now resides in Berkshire, and even though he lives in the south of England, he’s a keen follower of the club and has been a Vice President for many years. Sir William was ‘Bill’s’ maternal Grandfather who with only daughters was asked to carry on the name hence Ascroft-Leigh. Bill’s surname combines two well known families who have enjoyed many happy times at the ‘Hoppers and I’m sure many of our older members will remember the Leigh family name and in particular ‘Dick’ Leigh, to which the Leigh Gallery at Lightfoot Green was dedicated.