This Survey was conducted in mid May 2020 and to date there has been 324 responses analysed as below. 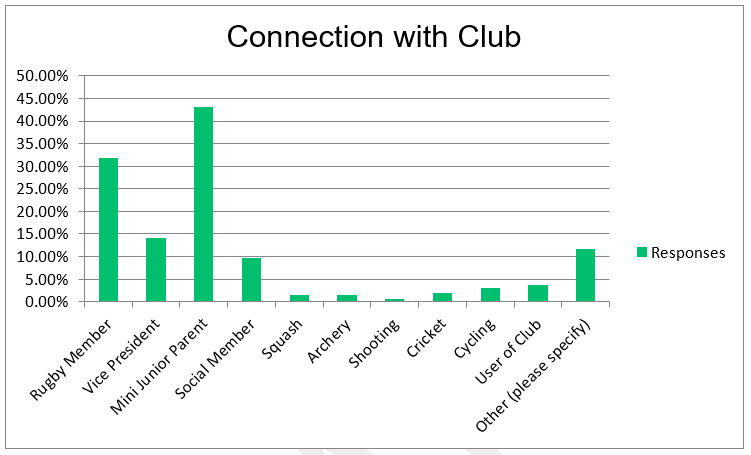 Some individuals will appear in more than one category.

While responses from Mini Junior parents have pre-dominated this is not surprising given the Club’s membership profile. A validation exercise was carried out comparing Mini Junior parents’ responses with all others and there appeared to be no skewing of the overall results.

A number of choices were given for possible capex projects using available funds. Respondents were asked to rank the projects. The % ranked first for each project was:

Applying a weighted average to all the rankings the projects were ranked: 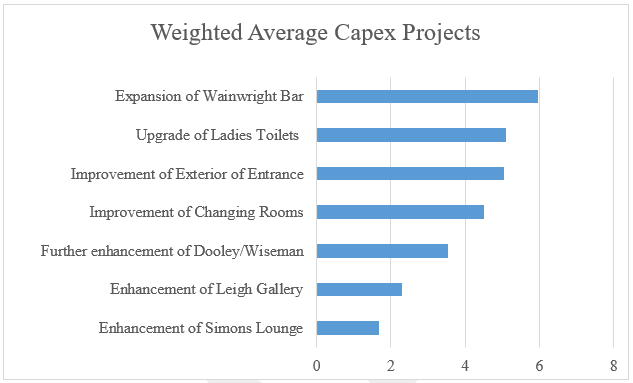 This ranking is the same as the Management Committee are currently exploring for utilisation of available funds.

The possibility of utilising volunteers, particularly during the current lockdown, to carry out some of the lower ranked projects will be explored. (Please see section before Conclusions)

Other Capex projects favoured were:

Respondents were asked whether they favoured an immediate sale of the Mound to finance Capital projects.

The Management Committee will therefore continue to explore the option of sale. A final decision to sell or not would need to be put to the membership in General Meeting

Respondents were asked whether they agreed with what appears to be the RFU’s intention to flatten the league pyramid and have more regional rugby. There was clear support for this policy both among all respondents and those associated with the Rugby side of the Club.

Respondents were asked what they favoured as regards a salary cap for the 1st XV. The results show a divergence of views but with the vast majority in favour of the status quo.

80% of respondents said they would be prepared to start paying their subs even when the Club is closed.

The Management Committee is vastly encouraged by this but for the moment does not intend to start asking for people to pay. It is impossible to predict how many members would be lost for ever if subs were demanded in a closed period and this needs weighing against the impact of a one off addition of a few months income. In the nature of things it is the non-respondents to the survey who are less likely to renew.

We would also like to retain the option of an appeal for donations to help finance Capex and re-commencing subs now would be two bites at the cherry.

Respondents were asked how likely they were to use all day catering facilities. 50% were likely to with 47% unlikely. (Balance didn’t respond)

The view of the Management Committee is that this option should continue to be considered but with caution. It should be borne in mind that this idea is as much aimed at bringing in local residents as satisfying existing members, many of whom do not live near the Club.

It isn’t possible to respond individually to every point raised but apart from the points addressed above there were a number of themes:

The Management Committee are acutely aware of the need to preserve cash but there are two compelling reasons for initiating capex now:

Therefore major projects such as partitioning and improving the Dooley, relocating the offices and expanding the Wiseman Suite, and replacing the boilers have been commissioned. It is estimated these can be financed without over exhausting cash reserves.

Comment was made about an increasing divide between the 1stXV and the other male rugby teams. There were also queries as to why other male teams shouldn’t have their own sponsors and kit.

One of the great strengths of the Hoppers is that it has always been a Club and not a number of separate teams that happen to operate at the same ground. This is summed up by “Once a Hopper always a Hopper”.

Culture is hard to change but the Management Committee are looking at how to lessen these divides and welcome suggestions as to how this can be achieved.

With the furloughing of a majority of staff communication has undoubtedly slipped.

The Management Committee would welcome any assistance in this area. Please email to info@pgrfc.co.uk if you can help.

This has long been ripe for improvement and those who attend the AGM will be aware of appeals for help in this area. It really needs a “champion” to take it on and realise its potential. In the short term volunteer assistance with stocktaking and tidying up the shop would be appreciated.

Volunteers are vital to the success of the Club. The need for volunteers for specific projects:

Have been mentioned above but if you have any ideas about areas you could help in please contact info@pgrfc.co.uk .

Without volunteers the Club will wither and die.

Feedback received about having a survey has been very positive and the level of response was encouraging.

As is to be expected there is no unanimity of views on any one topic. It is the job of the Management Committee, as elected by the members, to take all views into account and come up with a way forward for the Club. You may disagree with some of the decisions made but it is certain that others in the Club will agree as the survey indicates a wide divergence of opinions.

The Management Committee have found the Survey useful and while it was put together quickly they have learnt a lot from it. The possibility of a further survey later in the summer is being explored. If you have any questions you would like asked please email them to info@pgrfc.co.uk .

We now have access to the Survey Software and if any particular section of the Club wanted to survey their members this could be accommodated. It would be up to that section to frame the questions and to publicise the survey link among their members.