What a difference a week makes! After the miserable rain and the disappointment of the visit to Tynedale, Hoppers ran out in bright sunshine to host a strong Stourbridge side who, after seven matches were sitting fourth in the table.

Injuries and unavailability still plagued the team selection but even with Joe Prior returning at fly half and Will Davidson on the bench, it was a familiar squad that took to the pitch.

Stourbridge kicked off and almost immediately their scrum half, Morris, made a twenty-five metre break and was heading towards the Hoppers’ line when a brilliant tap tackle by Ryan Carlson saved the day.

Stourbridge continued to attack and the home defence was sternly tested but not found wanting as they repelled the onrushing forwards with Howard and Carlson in particular putting in huge hits in the tackles.

It was Matt Lamprey who broke the lines with an epic run from his own 5m line right up to that of the visitors where the ball was knocked forward in the tackle.

Though the Hoppers’ pack drove the scrum, Stourbridge secured the ball and cleared to touch on their own 22.

Hoppers lost the lineout but as Stourbridge went forward the ball was stolen by Carlson and passed quickly through hands as the home side attacked inside the 22.

Prior chipped the ball through towards the try line but a racing Scott Jordan could only watch it roll dead behind the line.

Stourbridge’s drop out was collected deep in the Hoppers’ half and moved forward. Prior then broke to the half way line and when he passed it on to captain PJ Millea the try line seemed but a spec on the far horizon.

Undaunted, he blazed his way through the open space to score the first try just right of the posts.

Jake Squirrell stepped up and added the extras putting Hoppers 7 – 0 up after twelve minutes.

Stourbridge responded with their own break down the wing and the ball was grounded over the try line. However, the officials saw a foot in touch and the try was not given.

With no let up in the intensity or speed of the play, the ball moved back and forth between the two 22m lines. From a Hoppers’ scrum on their 15 m line James Fitzpatrick picked up the ball and carried it down towards the opposition’s 5m line where a pass to Jordan put him over in the corner for the second try. The conversion attempt from out on the wing was wide of the mark but the lead increased to 12 – 0.

Howard was replaced by Luke Procter who in almost his first action of the game, received the ball from a lineout and dived over the line for the third Hoppers’ try.

Again the conversion was taken by Squirrell from wide on the wing and this time it fell short but the score moved on to 17 – 0 with less than ten minutes of the half remaining.

From the restart Stourbridge gained a penalty on half way and found touch on their opponents’ 22. They secured the ball and winger Rundle scored their first try in the corner. The conversion attempt from the touch line failed but the visitors were back in the game.

The action was still fast and furious and a break by Jacob Browne took him down to the Stourbridge 22 where only a forward pass foiled the attack and the visitors were able to clear towards the half way line. Hoppers attacked again but were halted by a penalty on the Stourbridge 22 which cleared touch beyond the Preston 10.

The lineout was secured and the ball passed swiftly through several hands before full back Heward slid over the line from wide on the wing. This time the conversion by Haisila was good and the teams went in for the break with the score at 17 – 12.

Whilst the teams had been fairly evenly matched, Hoppers had certainly been in control for most of the half.

Stourbridge were fast on the break throughout the half with little to show for their efforts but by keeping possession in the last minutes they were able to claw back the lead and were definitely in the game at the start of the second period.

Hoppers came out determined to re-establish their control and began running the ball with speed and confident passing, mounting wave after wave of attacks into the Stourbridge 22.

Only ten minutes of the half had gone when Ben Dorrington was injured and was replaced by Sam Stott.

Stourbridge were awarded a penalty on the Hoppers’ 10m line and Haisila opted to go for goal. Despite the calm afternoon and his position directly in front of the posts, his kick dropped short.

He was rewarded minutes later when he collected the ball from a Stourbridge lineout and scored their third try to tie the score at 17 – 17 where it remained as his own conversion attempt failed.

Play then moved into the Stourbridge 22 where the Hoppers’ forwards were camped for much of the remaining time. Phase after phase of pick-and-go had them pressurizing the visitors’ try line. A series of penalty scrums maintained their position and when yet another penalty was awarded in front of the posts the sensible option was taken. Squirrell tee’d up the ball and with less than five minutes remaining Hoppers were back in front albeit by a slender three points.

Recent games have been lost by poor decision-making but this week the team kept their heads and worked the ball amongst the forwards, keeping possession until, when they won a Stourbridge lineout and kicked the ball off the park, they took the match 20 – 17.

Arnie was smiling (although he said it was nerves) when he spoke after the match.

‘It’s good to get a win. We were under real pressure after losing three games on the trot and with the injuries we have, now increased with Alex Hurst and Tyler Spence out for this one, things were not going well.

Having said that, I thought the lads played a superb game, the first half was near perfect and we only let them in when we gave away field possession in the last five minutes.

The second half was more even with Stourbridge coming back into the game but I was very pleased with the way we kept possession after retaking the lead to see the match out.

Credit goes to Donny and Tom for preparing the team as I was ill for much of the week. There were some outstanding individual performances all over the field from, among others, Prior, Wallbank, and Carlson.

We need to be a bit smarter but the lads are learning week by week and today they were rewarded.’

The injury to Ben Dorrington was not serious so he should be fit for next week’s encounter which is away at Hinckley who now sit one place below us in the table with the same number of points. 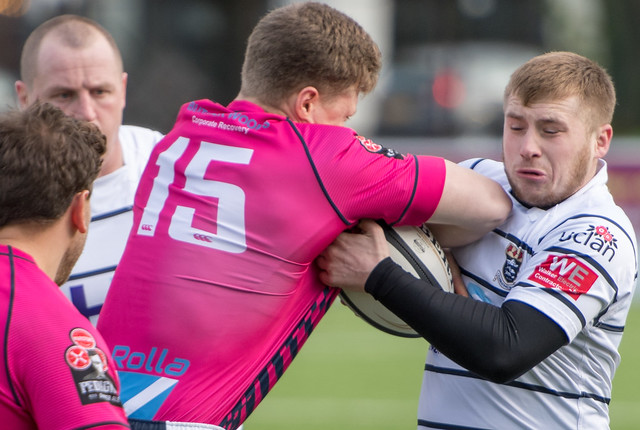