These troubled times lead to a great number of Northern clubs ceasing to play Rugby Union. The formation of The Northern Union in 1895, left only eight Rugby Union clubs represented at the Lancashire County meeting. 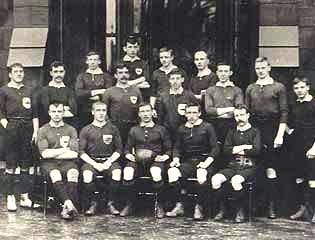 This picture was taken at the entrance to the Park Hotel, Preston, by the photographer Arthur Winter, in a storm of wind and rain. The date was Saturday the 2nd of March 1901 previous to playing Heaton Moor. This was the day of Mr H.T.Parke’s Presidential Dinner, in commemoration of the resusituation of the Preston Grasshoppers.

When in 1900 the club was reborn thanks to Roy H. Furness C.H. Plant and William F. Ascroft, (later Sir William, the long serving President) they were the only representatives of Rugby Union Football in the north of the county. Playing their home games alongside the River Ribble between the two Railway Bridges. The start of their final season at Ribbleside saw the first match action photograph in the local newspaper, versus Heaton Moor during early October. In 1909/10 they once again shared the cricket ground at West Cliff before moving to a ground just over the Old Tram Bridge. Changing accommodation was in the Bull Hotel (later the Bull & Royal Hotel) and the players then walked through Avenham Park and across the Tram Bridge to a pitch on the other side of the River Ribble. Hoppers gained strength, and once again were able to field two sides most weeks and drew players from a wide area as the Vale of Lune only came into being in 1901 with Blackburn and Fylde following after the First World War.

It is worth mentioning at this stage that members of Preston Grasshoppers had a great deal to do with the formation of the Fylde, Furness, Blackburn and Vale of Lune clubs. The playing record was excellent with a steady stream of players winning county honours and John Arthur Scholfield, who captained Cambridge, winning an England ‘cap’ in 1911 scoring a try in Swansea versus Wales. Also in that era Harold Parker played for Lancashire versus the original Springboks at Fallowfield, Manchester in 1906. Another ‘Hopper’ playing against an International XV was E.A. Bryning who represented Lancashire against The Wallabies during 1908. Season 1910/1 saw Preston chosen as the venue, for its first county fixture, versus Cumberland. With many players joining the armed services, all activity ceased during the First World War.

With regard to the colour of the player’s shirts, it is unclear when the club adopted its distinctive colour and style. The earliest evidence, is a photograph of the second team wearing the White and Blue irregular hoops in the 1912/3 Season, although the official colours at this time where a plain Scarlet top. Therefore it might have started its days as a change or 2nd XV shirt? As for the idea of the style: there’s a photograph of ‘Bowden Smith’s House’ team of Rugby School from 1871 in the Rugby Museum at Twickenham with the same configuration of hoops. Although the dark colour cannot be determined as it is a black and white photograph, an enquiry made to the school’s historian confirms the dark colour of the hoops and shorts are indeed, Navy Blue.

Sir William Fawell Ascroft, one of the Preston Grasshoppers resurrection committee of 1900, and later Club President for over twenty-five years, was educated at Rugby School from 1890, but was a member of School House, which had the same style shirts but with red in place of blue. Was he inspired by the style but chose the Navy Blue to match the Town’s colours?

Going back to 1869, the records show it was agreed at an early committee meeting, on green shirts. This may have changed however, as before the first game was played, a number of blue shirts with red caps were purchased. ‘Alcocks’ the RFU Handbook of the day first mentioning our club for the 1871/2 season, states that Preston Grasshoppers played in blue with a red cap  until season 1873/4 mentions blue and white stripes (probably describing hoops), before broad regular hoops then plain Scarlet from 1880 until 1914.

It would appear to have been a custom for players to turn out in a variety of coloured shirts in the early years, possibly their college colours. Early team photographs show some players wearing their international and county tops. Hence a motion was passed in committee when the Scarlet shirts were adopted, ‘that members playing in club matches play in the club uniform’.

Club photographs show a change to regular hoops was made for a short period after World War II. This was only due to the original style being unavailable.

In 1921-22 the club belatedly became fully active again after requests from the newly formed Fylde and Blackburn clubs to delay resumption, giving them the chance to get off the ground. By 1922 the walk from the Bull & Royal had become a thing of the past with a wooden hut being added to a sweet shop at the riverside. Two baths were also obtained but could only accommodate two people at a time. A second team and then a third team became active before the next move took place. The number of playing members increased steadily and coinciding with the fixture at Maudes Meadow versus Kendal in January 1924, for the first time in its history, the club fielded four teams.

In 1924 a lease was taken on land at Farringdon Park next to Preston Cemetery. The ground had at one time been the home of an Amusement Park and Cycling Track.

This proved to be an unfortunate choice as far as the soil was concerned. Thick mud was everywhere and it did not smell too nice either! Even as early as the first season a game against Sefton had to be moved to Leyland Motors. Despite this, the fixture list improved with an exhibition game against Liverpool and new opponents in Skipton, Bradford, Wilmslow, Otley and Hull & East Riding were founded. Much work was carried out on the ground, so much so that in 1929 a County Trial game was held there.

Although there was no clubhouse, the willingness of a nearby landlord to ignore the licensing laws meant the social side flourished and a covered stand for 150 spectators was erected for the start of the 1925/6 season. During this period the season finished and sometimes started with a 7’s competition, ‘Hoppers were the victors at Manchester in 1927.

Club is fortunate to have rare action photographs of games played during the period of residence at Farringdon Park, and most interestingly it can be seen that squad numbers and playing mits are nothing new. Two of the matches feature Sale ‘A’ and Blackburn with Hoppers seen playing in their black change shirts.

In 1929 the club’s financial status was enhanced when it agreed a sub-tenancy with a syndicate (Preston Speedway) who wished to operate a Dirt Track and meetings began Good Friday 1929.